The precious metals sector and gold stocks in particular have been extremely cheap for several years. The reason it has remained that way is Gold has not been able to begin a true bull market because the fundamentals have not been in place.

Since the start of 2018, after conducting a thorough and exhaustive analysis, we predicted that precious metals would begin their next move higher when the Federal Reserve shifted policy from rate hikes to rate cuts.

Yes, as 2020 beckons, the gold stocks have begun to move, but let me explain why there is so much more upside and the best is yet to come. Specifically, looking out to 2020 to 2021, there is strong potential for a significant move higher.

Since I started my newsletter in 2009, my portfolio has risen over 5-fold. That is during a period when GDX and GDXJ have losses. We have outperformed the sector by over 600%. 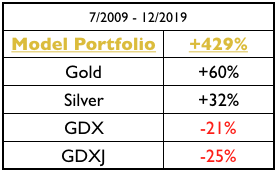 "I have been following Jordan’s work for the past six years and can say he is absolutely one of the best analysts in the field. I am continually impressed by the volume and quality of content Jordan puts out on a weekly basis. His reads on both the fundamental and technical picture allow readers to understand the market and his company analysis and stock selection are excellent. He is one of the best in this industry at finding stocks that can rise 500%-1000%. Understanding the nuances and particulars of this sector requires a steep learning curve. It can take years to fully acclimate yourself. Best to learn from Jordan and let him do the work for you!"


Had you subscribed a year ago, you would have had the opportunity to:

Let me share with you some information relating to our process and how we select companies. As a private investor running my own family office and co-investing up with other HNWIs, my primary goal has always been to make a profit for myself and my clients. Performance is everything. When it comes to the precious metals sector, Jordan one of the only people I go to for guidance and analysis of the market. He understands the market so well (including its history) and knows its pulse better than most." "I have subscribed to many investment services over my lifetime. I can honestly say Jordan Roy-Byrne has developed not only one of the most analytically accurate, but also has hit the high water mark by making his analysis feel personalized. In addition to a detailed weekly report, he often sends additional emails with daily observations of not only the physical metals and miners, but also related metrics such as the market and currencies. His service is a great integration of history and future probability that has not only helped me make money, but also avoid losing. It truly is a 5 Star Service at a great price."

For less than $1/day you get my high quality, actionable research and you can invest right alongside me.

Join me now so you can position yourself to take advantage of the big move that is coming.

You are only minutes away from a welcome email with complete access to all of materials, including our portfolio, recent updates and company reports.

"I am simply a pure market-timer for a broad basket of gold stocks and precious metals. Jordan, on the other hand, has provided superior STOCK-PICKING abilities over the longer-term. I am familiar with most gold stock subscription services over the past 30 years. I rarely provide endorsements of any kind, but Jordan's ability to analyze individual gold/silver stocks has been among the top 5 services over the past decade. First and foremost, I respect his integrity. "