The collapse of 2008 remains fresh in mind. And yes, while collapse is the most overused word in the financial markets (next to bubble), 2008 was indeed a collapse for everything. Our beloved gold stock sector plunged roughly 70% in only three months. This collapse hangs in the back of the psyche each time global trouble intensifies and the gold stocks selloff. In the last week or so I’ve received many emails from subscribers who are worried about a Euro crash and a potential repeat of 2008. Let me explain why there is absolutely no need to worry if you own the gold stocks.

First, crashes and big declines don’t happen frequently. The fact is, a crash and recession pave the way for a new advance and recovery. There has to be a long buildup of new excesses before the next major decline. Sure markets can correct 20-30% but after a big bust there is much flat-lining. For example, Japan’s economic growth for much of the past 20 years has flat-lined. We’ve had two bad recessions and bear markets in the last 10 years. Don’t you think that has already cleansed some excess from the system?

You should have noticed that markets perform in different ways in these differing crisis’. A private sector credit crisis is strongly deflationary. Everything declines in nominal terms while government bonds and and reserve currencies rise. Gold fell in nominal terms but was a very strong performer in real terms. In a government led credit crisis, some currencies rise and some fall. The same can be said for bonds. Equities and commodities will initially decline but far less than in a private sector credit crisis.

Consider the performance of the precious metals complex. In 2008, Gold fell 30% but performed well in real terms. Silver and the mining stocks collapsed. Today in the perhaps “repeat of 2008,” Gold accelerated 25%, Silver advanced off its bottom and the equities as of a few days ago completed a major breakout. Yet with the Euro falling, Greece near default, the Eurozone in turmoil and the general equity market struggling, investors remain skeptical of our beloved gold stocks.

The fact is, the gold stocks are undergoing significant accumulation by the smart money.  The daily chart of GDX (below) shows a strong recent surge in both accumulation and on balance volume. Moreover, consider the past two days. Yesterday GDX gapped lower and was down about 5% at the low of the day. The market rallied into the close and was only down about 1% from where it opened. Today we see similar activity. The market moved lower early but has gradually made it back to positive territory. 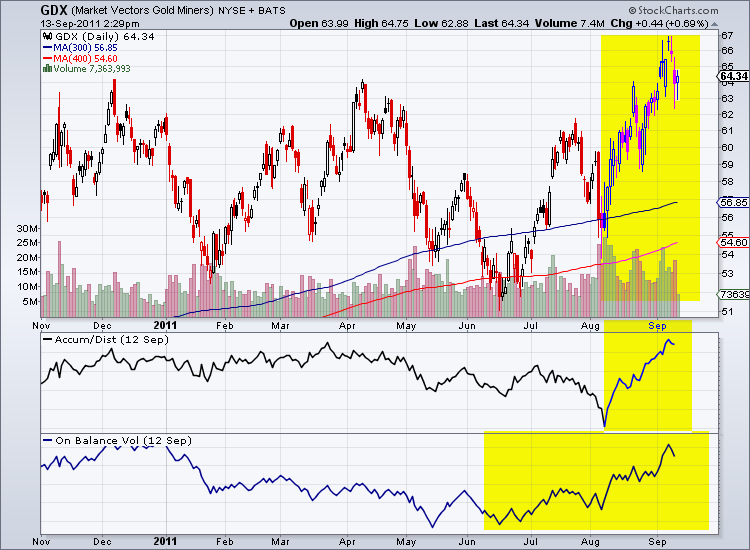 It is also wise to check the money flow indicators on a larger time scale. The strong daily accumulation is no aberration as it is confirmed by the weekly chart. Note the strength of the increase in accumulation and on balance volume. 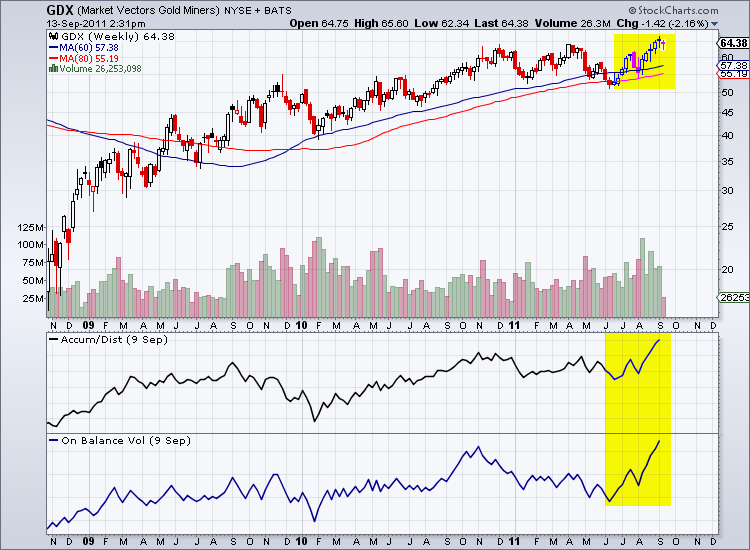 Yes, in recent weeks we’ve written much and probably too much about the gold stocks. However, the opportunity is too great and potentially to profitable to ignore. We’ve shown the value, the lack of ownership, the improving fundamentals and the beautiful technical setup. The market is breaking out and this is to be expected given the huge positives in the money flow indicators. Yet some still worry. They think this could be 2008, even though it is clearly not. We guided our subscribers through the earlier weakness and are now taking advantage of the major profits that lie directly ahead. If you are a serious investor then we invite you to learn more about our service and how a professional can help you. Don’t be left behind as this bull market enters its most profitable phase.