One of the reasons I’m fascinated by markets is because it reveals a lot about human nature and our inherent biases. Most people don’t come into the markets with a rational and empirical mindset supported by hard data; they are too busy watching TV all day. This is fine by me because it is human irrationality that creates exploitable inefficiencies in markets.
When all asset classes are rising due to favorable economic conditions and a massive credit bubble, everyone thinks they are an expert in investing. “Buy real estate because it never goes down!” “Buy stocks on dips!” “The U.S. dollar is king!” It is only at major turning points that you see who really understands what they are talking about.
Most of the people who invest are what I would call passive investors in that they are long either the stock market or bonds via 401k’s, IRA’s, or long only mutual funds. Now let’s be real for  a second. Do you think these people perhaps, maybe, possibly have a biased outlook?
What I am trying to reveal is the truth about the pervasive bearish bias surrounding gold. When people tell me gold is a bubble, I ask: according to what indicators? I have failed to see one piece of empirical evidence that would suggest gold is a bubble. All I hear are subjective forms of analysis along the lines of “gold is expensive” or “the gold trade is crowded.” To be quite honest, sometimes people betray their ignorance the instant they open their mouth.
Gold vs Stocks
What you will notice is that most people view markets through their owned biased lenses. Why is it that no one complains when stocks

are rising? Where were all the bubble experts when the Dow rose from 750 to 14,000 from 1982 to 2007? I remember quite clearly trying to explain to people in 2007 about the coming collapse in stocks. No one could see the writing on the wall; it was as if I was speaking a foreign language. What did this mean to me? It meant we were approaching a major turning point.
People call gold a bubble when it makes a 20 year move from $850 to $1219. Now this is positively amazing. What other asset class would be described as a bubble when it has underperformed inflation over a 20 year period? I suspect only an asset that, for whatever reason, is lightly regarded by the general public. 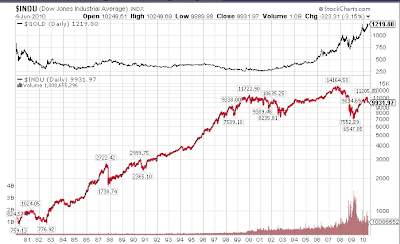 Gold vs GDP
It is logical to think that all assets would rise more or less in unison in a growing economy that is constantly experiencing price inflation. However, this is not the case. Gold has underperformed GDP by a wide margin over the last 20 years. 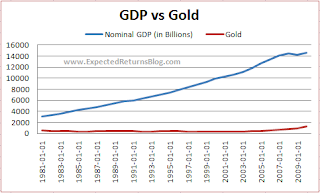 For those skeptical folk who suspect that GDP has outperformed every asset class by a wide margin, please refer to the following chart comparing GDP and the Dow. Correlation, yes? 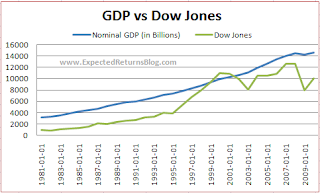 Gold permabears need only take a second to look at hard data and rid themselves of their self-inflicted delusion. Bull markets are known to climb a “wall of worry.” We are climbing that wall now as the dumb money unloads gold and the smart money accumulates. If gold is a bubble, then quite frankly, it is unlike any bubble I have ever seen in history.
Source: http://www.expectedreturnsblog.com/2010/06/analyzing-gold-bubble.html
Previous

Safe Havens are Shining but are Equities about to Rocket Higher?