In the face of a correction or poor price action, we’ll often hear analysts proclaim the bullish fundamentals of precious metals. While this is true on a structural and secular basis, it doesn’t mean the market always advances every year or two. We’ve written about the wall of worry phase and how progress in the second third of a bull market is limited. The HUI hasn’t made any net progress in the past four and a half years. It has actually made only limited progress since 2006! Furthermore, the typical corrections in this sector are wicked. Corrections of 25% are routine and happen several times per year. As we noted in our last editorial, this market has endured several 40% setbacks. As market observers and investors we need to be especially diligent about the near-term fundamentals and weigh them with the present risk/reward of the market.

Today, we seek to understand if the poor performance of gold stocks is a harbinger of things to come or if it is an example of a major correction in an ongoing bull market. Specifically, we are going to evaluate the fundamentals of the miners by looking at some of our favorite ratio charts. Intermarket analysis can help us understand the potential near-term fundamental environment for the gold shares. 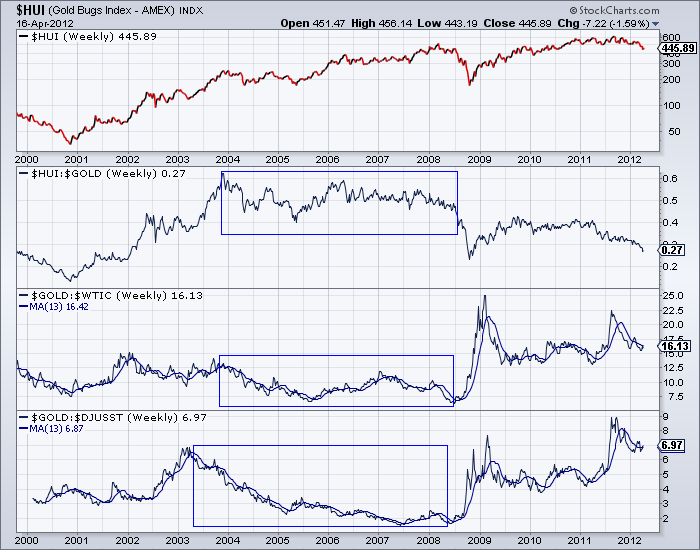 The HUI had a terrific rise at the start of the bull market for two reasons. First, it rebounded from the bottom of a bear market and tremendously low valuations. Second, Gold was rising relative to its cost inputs and so profits would expand. From the period 2004 to early 2008, the HUI continued to rise but rising Oil and Steel costs put pressure on margins. Market sentiment grew more bullish during this time and increasing valuations helped the gold equities in a more difficult fundamental environment. The financial crisis was actually great for gold producers because Gold rebounded back to its highs right away while cost inputs plummeted. As a result, margins exploded and share prices rebounded spectacularly.

Margins have remained strong and producers have generated record cash flow and profits but share prices have lagged in the past year. Let’s look back to 2004-2008. Inflation in the economy pressured producer margins but share prices performed well as a result of positive sentiment and increased valuations. In the past 18 months, companies have performed well but share prices have stagnated. The reality is two-fold. First, gold stocks needed time to digest the significant gains from late 2008 to late 2010. Second, during this prolonged consolidation valuations have come down. We’ve illustrated in past writings how and why this occurs in this phase of the bull market.

The “real price of Gold” (Gold versus its cost inputs) holds the cards. The real price of Gold appears to be bottoming after following the mini Euro-crisis parabola and fall. A break in Gold past $1800/oz combined with a rise to new highs in the real price of Gold would be spectacularly bullish for this sector. Beyond the obvious reason, such events would likely shift sentiment and we’d see valuations perhaps return to 2006-2007 levels. It’s simple. Rising valuations and rising margins are a one-two punch for share price appreciation.

We believe the real price of gold is likely to rise as the economy stalls and the stock market hits resistance. In this environment, Gold would strengthen against Oil, Steel and the like. Furthermore, Gold would be the first to sniff out the next round of action from the Fed, ECB and BOJ. Presently, the gold stocks are unloved and oversold but on the cusp of a major bottom. In our service we are forming lists of our favorite companies which could benefit tremendously from the coming bull run of the next few years.  If you are a serious investor and you’d be interested in professional guidance then we invite you to learn more about our premium service.

QE: Past, Present and Future