In a word, no. We divide our rationale into three parts.

Back in 2008, a recession was beginning, the private sector was in intense deleveraging mode and the credit markets foreshadowed what was to come in the equity and commodity markets. Today we are seeing growing credit stress on the sovereign side and not in the private sector as we had in 2008. Certainly there are issues with banks but its impossible to see a repeat of 2008 when major liquidation, bankruptcies and layoffs already happened. They can and will happen again but the scale would be much smaller and so would the effect on capital markets.

A private sector credit contraction is deflationary because the private sector can’t monetize its debts or take on more debt. Therefore it curtails risk and sells assets in order to deleverage. Credit problems on the sovereign side have inflationary implications. Sure governments do sell some assets but that is in dire circumstances. It’s far easier to restructure, monetize and/or take on more debt or default. In each and every case, the currency loses value and inflation rages.

Those who expect another 2008 seem to ignore that the private sector crisis already happened. The next act(s) is the sovereign debt crisis in Europe, Japan and eventually the US.

Also, we want a key difference in sentiment. In 2008, sentiment remained quite bullish on Gold and Silver for several months after the March peak. Today Gold and Silver are trading off their highs but sentiment figures reflect more caution or indifference. Here are some figures.

Furthermore, assets in the Rydex Precious Metals Fund have declined 61% since the start of the year! Assets are currently at a two-year low! 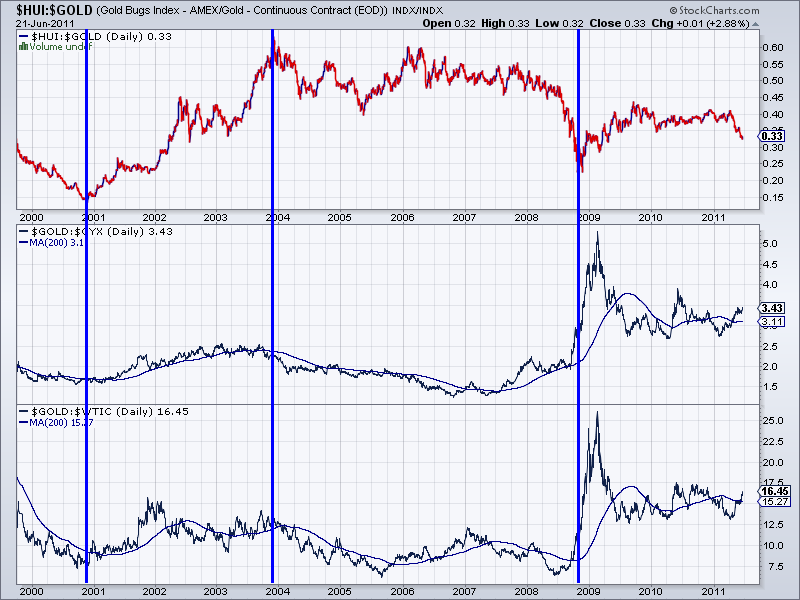 We use a 200-day moving average to smooth out the volatility. In the summer of 2008, the 200-day MA of the Gold/Oil ratio was about 8. Its presently at 15 which aside from early 2009, is at a 10-year high. The Gold/Industrial Metals ratio in the summer of 2008 was at 2.0. It’s now at 3.11. In 2007-2008, the ratios were near four-year lows and that was reflected in the weak relative performance of gold stocks. Note that the ratios began rising in summer 2008 and then a few months later, gold stocks rocketed higher in nominal terms and relative to Gold. These ratios have been rising for several months and if it continues, we should expect gold stocks to strengthen against Gold.

The high long-term levels in these ratios indicates that profit margins should be strong as is. Below is a chart from Frank Holmes and CIBC that shows earnings have been steadily increasing across the entire sector. In recent quarters the intermediates and juniors have shown the strongest earnings growth.

The differences between today and 2008 (with respect to the gold shares) are evident on both a micro and macroeconomic spectrum. In 2008, sentiment was too bullish on Gold and Silver while fundamentals for the mining equities were deteriorating as a result of high Oil and high inflation. Today, fundamentals remain as strong as ever and are likely to improve thanks to Gold and Silver outpacing mining cost inputs. Meanwhile, sentiment indicators are extremely favorable for both the metals and the shares. Finally, the big picture has shifted. The shock of the private sector credit crisis has passed while the sovereign debt crisis is next on stage.

Simply put, we have seen a correction or retracement of the massive gains of the past few years. There may be more backing and filling for a few months before the sector begins its next impulsive advance. Investors should now be in accumulation mode as we see significantly higher prices six and twelve months down the road.  If you are looking for more analysis and professional guidance, then we invite you to learn about our premium service.