Toronto, Ontario (January 9, 2012) – Argonaut Gold Inc. (TSX: AR) (“Argonaut Gold”, “Argonaut” or the “Company”) is pleased to announce the results from a new National Instrument 43-101 compliant (“N.I. 43-101”), Preliminary Economic Assessment (“PEA”) for the100% owned La Colorada gold-silver project, located 45 km southeast of Hermosillo, Mexico. The updated PEA was completed by SRK Consulting Inc. of Denver, CO. Argonaut acquired the La Colorada project (along with the San Antonio Gold Project) through the acquisition of Pediment Gold Corp. in February of 2011. (All dollar values in this release are expressed in $US).

“We are excited to present the La Colorada PEA which shows a very significant return on a minimal initial investment. It demonstrates the strong economic viability of the mine, supporting a pay back of approximately 1 year. Development of the project will be fully funded by our internal cash balance and ongoing cash flow from operations. The PEA is inclusive of drilling thru September 2011. Further drilling on the property and potential optimization of the project remain important initiatives for the company.”

“The necessary permits are in hand for us to begin production in the second quarter of 2012. The La Colorada mine has robust project economics that will potentially contribute over $300 million in cash flow for Argonaut shareholders. The Pediment acquisition is a prime example of how Argonaut can Create Value Beyond Gold.”
Project Economics and Production Schedule

The mining plan developed for the La Colorada project by SRK Consulting provides for a production profile which will involve the processing of approximately 35.5 million tonnes of total potential mineable material set out in the PEA. Over a 9 year project life a total of 480,000 gold equivalent ounces is expected to be recovered, providing an average production of approximately 53,000 gold equivalent ounces per year. The LOM average strip ratio for processed material is estimated to be approximately 3.4 to 1. A summary of the annual mine production is outlined below.

Argonaut Gold has calculated the gold equivalent ounces using a $20/ounce silver price and a $1500/ounce gold price, providing a 75:1 gold equivalent ratio. The PEA is preliminary in nature and includes inferred mineral resources that are considered too speculative geologically to have the economic considerations applied to them that would categorize them as mineral reserves. There is no certainty that the PEA will be realized.

The La Colorada resources disclosed as part of the updated PEA were reported in a N.I. 43-101 compliant Technical Report filed on www.sedar.com on December 8, 2011. The 1,067,000 gold ounces grading 0.64 g/t gold is contained within 50 million tonnes; this was calculated using a 0.10 g/t gold cut-off grade. The complete resource estimate table is included below:

For further information on the La Colorada project please see the N.I. 43-101 compliant technical report entitled “Technical Report on Resources La Colorada Property Sonora, Mexico dated December 8, 2011 and available on www.sedar.com and under the company’s profile as well as the company’s website, www.argonautgoldinc.com.

Argonaut is a Canadian gold company engaged in exploration, mine development and production activities. Its primary assets are the production-stage El Castillo Mine in the State of Durango, Mexico, the development stage and past producing La Colorada project, the advanced exploration San Antonio project, and several exploration stage projects, all of which are located in Mexico.

The potential quantities and grades disclosed herein in connection with the drilling results at La Colorada have been presented in an updated resource prepared by SRK Consulting of Denver, CO.

The Company believes that in addition to conventional measures prepared in accordance with IFRS, the Company and certain investors and analysts use certain other non-IFRS financial measures to evaluate the Company’s performance including its ability to generate cash flow and profits from its operations. The Company has included certain non-IFRS measures in this document. Non-IFRS measures do not have any standardized meaning prescribed under IFRS, and therefore they may not be comparable to similar measures employed by other companies. The data is intended to provide additional information and should not be considered in isolation or as a substitute for measures of performance prepared in accordance with IFRS. Readers are advised to read all IFRS accounting disclosures presented in the Company’s Financial Statements for more detail.

Preparation of this press release was supervised by Mr. Thomas Burkhart, Argonaut’s Vice President of Exploration and, a “Qualified Persons” as defined by NI 43-101. Mr. Alberto Orozco, Argonaut’s Mexico Exploration Manager also supervised the drill programs and on-site sample preparation procedures at La Colorada. Bret Swanson of SRK of Denver, CO, who is an “Independent Qualified Person” as defined by NI 43-101 and the lead person responsible for completing the updated La Colorada pea has reviewed this press release as it relates to the La Colorada project.

For sample analysis the Company utilizes a system of Quality Assurance/Quality Control that includes insertion and verification of standards, blanks and duplicates consistent with industry standards. Samples from the La Colorada project are collected at site by personnel of Inspectorate’s preparation laboratory in Hermosillo where samples are prepared and pulps sent for assay in Inspectorate’s Sparks, NV laboratory. Samples are analyzed for gold by Fire Assay and Atomic absorption finish (PKG-AuAg assay code; 0.005 to 10ppm detection limit) plus Silver by Aqua Regia and Atomic Absorption finish (0.1 to 200 ppm detection limit). Samples over 10 g/t Au are assayed with gravimetric finish (Assay code Au-1AT-GV). All samples are also assayed by ICP-AES (code GENX-30) for a suite of 30 elements.

An updated N.I. 43-101 compliant technical report will be filed within 45 days of the date of this press release. 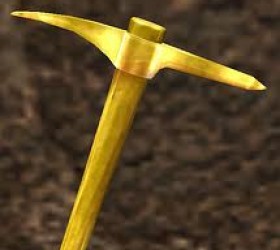 The Gold Stocks are Tracking Past Equity Bull Markets