Not my post, but definintly worth a re-post on my own blog. Special thanks to Frank Holmes. Chart 1: Gold stocks poised to bounce, according to BCA Research

Jeffrey Currie, an analyst with Goldman Sachs, suggested just under a month ago that gold miners should hedge their output and lock current prices. In his opinion, gold would be the next big short trade. Other analysts, including Tom Kendall of Credit Suisse, also followed with negative commentary on the gold market, adding their names to the short-selling list.

It’s interesting that this group dares to recommend that investors do the exact opposite of what asset allocation studies show: adding gold and gold stocks to a portfolio can add alpha without a significant increase to risk. Not only are these analysts ignoring proven academic research, they seem to be ignoring reality.

BCA Research published a report at the end of last week highlighting that gold prices have failed to rise in recent months in spite of a weak dollar, adding that a catch-up is likely. BCA argues that gold is oversold on a technical basis, as seen in the chart above, which in itself could be enough to drive a gold rally above the $1,500 per ounce threshold. 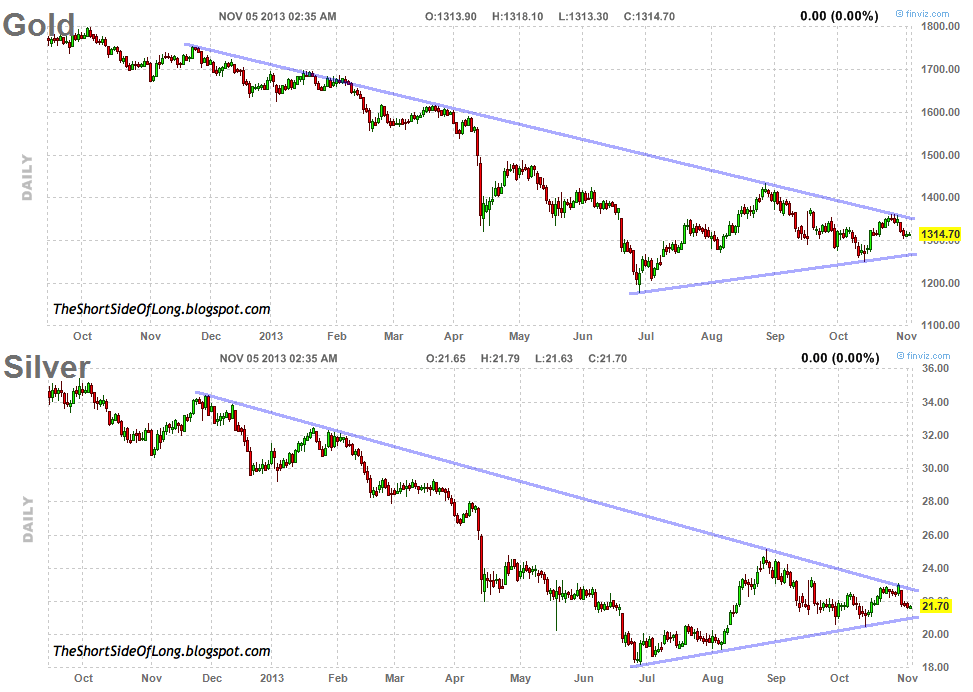 Source: BCA Research & US Global Investors
Personally, I continue to follow the technical, yet simple, triangle patterns in both Gold and Silver. Upside breakout, while not preferred, would force me to buy a little bit (because you never know weather or not we have already seen the bottom). However, downside breakdown, much more preferable, would make me load up the truck and buy a lot more!
According to Chart 2, prices of both metals are entering final stages of the decision point and therefore we should find out the next trending direction very shortly. Chart 1 definitely shows how extremely oversold the whole sector is on historical basis, so I hope we do see a break down and have one final sell off, washing anyone hopeful of higher prices that is left, out of their position. Gold Bear to end with a Bang