The Short Side of Long Blog

Earlier this month I wrote a post entitled Gold Miners In Crash Mode that went on to discuss nominal and relative attractiveness of the sector. Whether it was the technical oversold levels or the extreme bearish sentiment, there is no denying the fact that Gold Miners are now at bargain prices. However, I would also like to remind my readers that when one tries to catch a falling knife, bargains can sometimes become even cheaper (as we’ve all learned through our mistakes).So how are we to know if a bear market has ended?
We can never be 100% sure that the bear market has ended until the new uptrend is completely re-established. Currently, the Gold Mining sector still remains in a downtrend by all definitions. However, what we can do is track the internal developments of the index as it trends lower, gauging the overall commitment by the sellers and monitoring for early signs of change.A common condition in a bull market is to see more and more stocks reach new highs as the overall index progresses upwards. The same condition is true in the opposite manner for a bear market. But this is when it gets interesting. At times, especially near the end of trends, there are non-confirmations or so called negative divergences between the price and breadth, which lets us know that a change in trend could be around the corner. Let us investigate a potential non-confirmation within the Gold Mining sector in Chart 1, below.
Chart 1: Despite a lower low, fewer Gold Mining stocks broke down

Source: SentimenTrader (edited by Short Side of Long)
After an intermediate top in October 2012, Gold Miners recently broke down and surpassed their May 2012 low. As the support broke, many of the investors dumped their holdings as they panicked in fear of even lower prices to come. However, if we look at the breadth of the overall index, there are currently at least two major non-confirmations worth discussing. By looking at Chart 1 above, we can notice that despite the lower index prices at (1), the summation index is actually starting to turn up from a higher level at (2) and despite the lower index prices fewer stocks actually broke down into new lows at (3). This could be an early signal of seller exhaustion.
Chart 2: During March 2009, S&P 500 went through a similar divergence 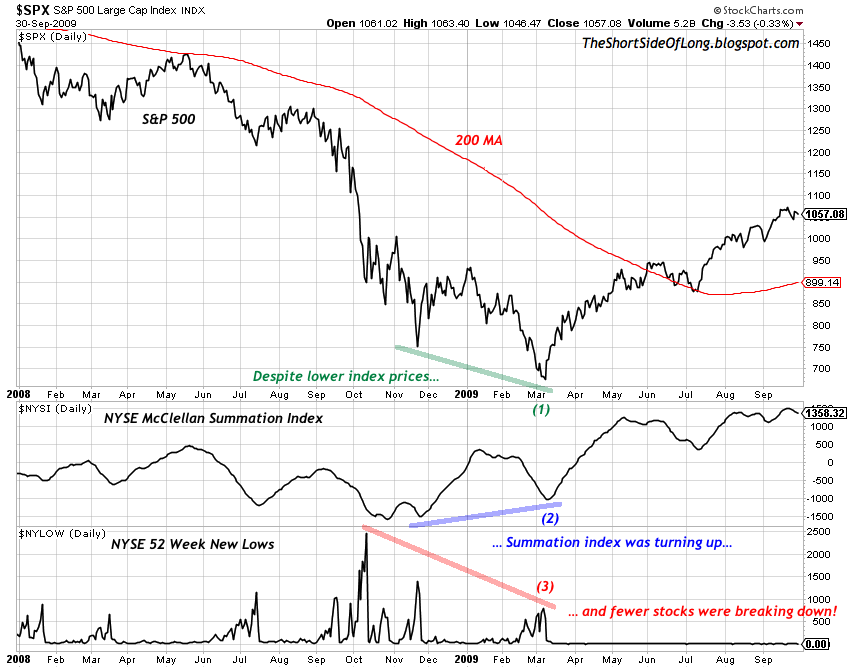 These types of breadth conditions are widespread throughout all markets and not just the Gold Mining sector. Let us turn the clock back to the infamous equity bottom of 2008/09 and study the way internals behaved within the S&P 500. A quick glance at Chart 2 shows a very similar case scenario to Chart 1, so let us make two important similarities:

The Bottom Line
As long as the current breadth does not deteriorate further, there is now a potential for Gold Miners to bottom out in a similar (but most likely not the same) fashion as the S&P 500 did back in 2008/09. In both cases, breadth was extremely oversold and sentiment extremely pessimistic. Furthermore, in both cases, a powerful bear market discounted the price by at least 40% to 50% from its initial peak – usually a sign to start accumulating positions. From a contrarian point of view, this is definitely a buying opportunity and not a time to liquidate like the rest of the fearful investors.