This essay is based on the Premium Update posted on October 8th, 2010

The International Monetary Fund’s annual meeting at the weekend failed to ease currency battles roiling markets, pushing the dispute off to a summit next month of leaders of Group of 20 countries, with no clear resolution in sight.

Meanwhile, the lines are drawn, the cannons are loaded – the currency war is on.  Each nation is taking unilateral actions to defend its economy from the other in an escalating battle over the value of the world’s key currencies.

In the long term this will be very good for the price of precious metals. But first we anticipate a correction.

We often field questions about the favorable entry point for long-term investments in gold. The answer is “now”, as we do not suggest timing this correction with one’s long-term capital. If one prefers to take the risk anyway and wait with the purchase for lower prices, we would still suggest purchasing metals with at least 2/3 of one’s long-term capital and waiting to enter the market only with the remaining 1/3.

Based on Friday’s intra-day price action it seems that we might see a double-top in silver – something for which the white metal is known. 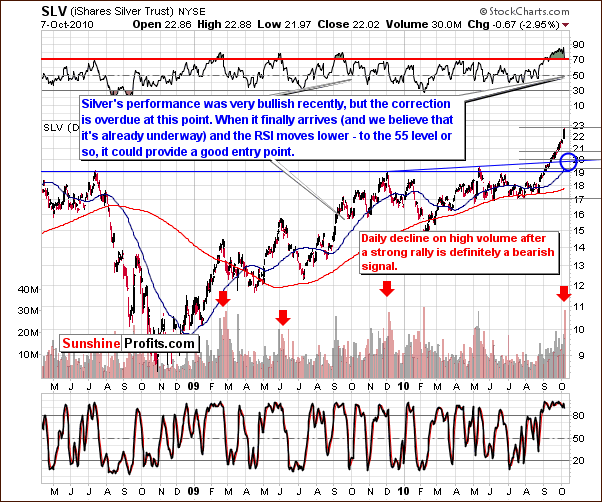 We provide specific target levels to our Subscribers, but the $19 – $21 area is something worth keeping in mind. As far as timing goes, the short-term silver chart provides us with details. 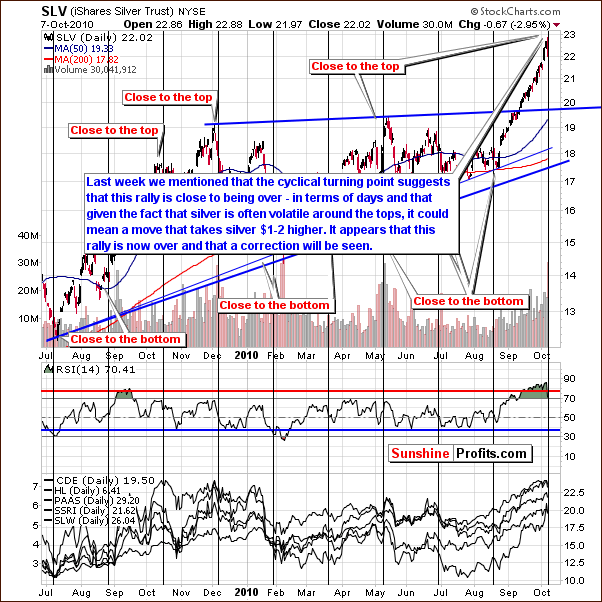 Last week we featured the analogous chart, which suggested a turning point in the first half of October – and this is where we are today. Consequently, the “top being in” scenario is confirmed not only by the levels that silver reached, but also by the cyclical nature of the white metal.

Moreover, we would like to quote something we told our Subscribers last week:

The white metal breached to new nominal highs, so we’ve examined how silver performed during the previous times that it broke into new highs.

Let’s not forget this analogy. The previous high is at $21.44 for spot silver, so the price of silver is likely to move below this level during consolidation.

Other markets should be monitored closely in the coming days as they will likely provide implications towards silver’s next move. Sunshine Profits will continue to monitor all markets and utilize its tools in order to provide its Subscribers with timely updates as we move through this consolidation period.

Moving on to the precious metals sector, let’s take a look at the long-term HUI chart. 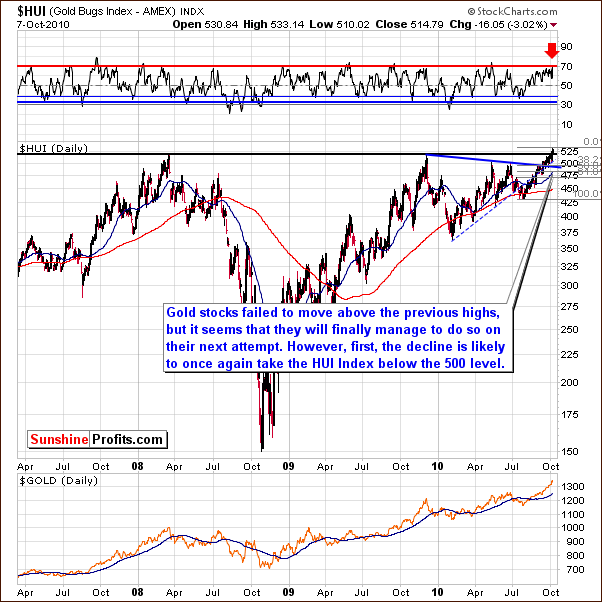 Last week we presented two possible scenarios for mining stocks. The first concerned a breakout above previous highs followed by a slight decline and consolidation. The second scenario was for a decline with a consolidation to begin before the level of previous highs was reached with subsequent new highs to follow. The latter case is what we have seen in recent days as the HUI Index did not surpass previous highs.

Although a move lower is likely and a return to levels below 500 may seem possible, the obvious expectation of a move down to 370 or so before reversing is not likely to be seen. As was the case of the general stock market recently, what seemed an obvious head-and-shoulders pattern never really played out. The “obvious” frequently does not come to pass with regards to financial markets. 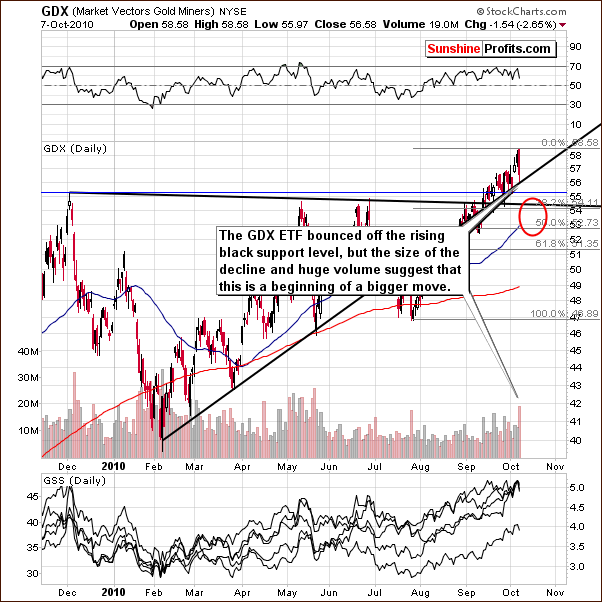 The GDX ETF, a proxy for the mining stocks, points towards a likely correction in the short-term perspective. The bad news here is that we have very few tools to apply in this least predictable – at this time – market. Consequently, target level is quite wide and Fibonacci retracement levels are our only really reliable tool on the above chart. Lower boundary is marked with 50% retracement level close to the $53 in GDX ETF and upper one marked with 38.2% retracement level, which is slightly below $54 coinciding with medium-term declining support level.

Once again, other markets such as gold and silver need to be monitored to further determine if mining stocks will bottom at the expected target levels. Consolidation is likely, of course, even though we have not yet seen a fall below rising support levels. 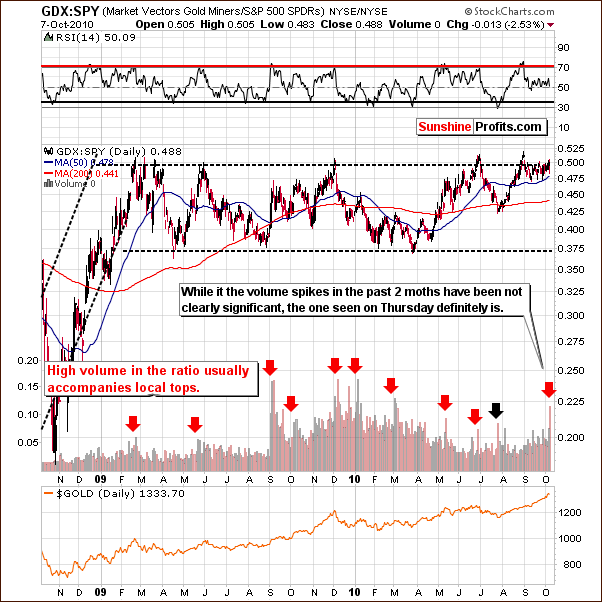 The GDX:SPY ratio chart shows exceptionally high volume and this factor has consistently accompanied local tops in the past. Having rallied for the past several weeks, it is likely that mining stocks have formed a local top.

Volume levels in the above chart are obtained by dividing daily GDX volume by that of SPY ETF. In this case the GDX daily volume was relatively high comparing to the SPY ETF volume, which has been low on a relative basis. This scenario very often accompanies local tops.

Multiple signs point to a consolidation period in the near-term for mining stocks. This is consistent with expectations in the gold and silver markets themselves but as is the case there, the consolidation period is expected to be minimal before we are likely to again see an upswing and additional rally in the precious metals sector.

Ultimately you are buying the same yellow or white metal for your fiat money – worthless taking the intrinsic value into account – and you buy something that’s tangible. When you buy your metals, it is the same stuff, no matter if you will buy it with dollar, renminbi, rupee or any other currency.

Besides, the currency that gold will go up by the most – percentage wise – will most likely be the currency, whose holders will suffer from the biggest inflation, and with prices rising much faster than in other countries, will it really matter if your nominal gain on your gold investments is bigger? We don’t think so.

We have also received a question about the favorable entry point for long-term investments. The answer is “now”, as we do not suggest timing this correction with one’s long-term capital. If one prefers to take the risk anyway and wait with the purchase for lower prices, we would still suggest purchasing metals with at least 2/3 of one’s long-term capital and waiting with entering the market only with the remaining 1/3

The Contrarian Call on Gold