The Yellow Jacket high-grade, fault controlled, gold and silver mineralization has been encountered over a strike length of approximately 700 metres and remains open.  3D IP imaging has highlighted a number of other structural zones with high-grade potential.  Aggressive follow-up drilling at several other targets is expected to commence early 2013.

During the most recent program, which commenced in early October, 780 metres of core were drilled in four holes.  Three of the four holes hit significant vein mineralization, which remains open to the north and at depth.  All vein intersections to date are within 150 metres of the surface (which could represent open pit mining depths) with quartz veins widening at depth (Figure 2) and have not been included in the current North Area resource.  The silver to gold ratio of holes NB-12-138 & NB-12-183 is distinctly higher than that of the overall North Bullfrog resource estimate and could represent a major new silver discovery in the district which could benefit the overall project financing.  Assays for the remainder of hole NB-12-183 and the other three holes are pending at this time.

*Intercepts are approximate true width and are calculated with 0.2 g/t gold cut-off
and up to 0.7 metres of internal waste.

Jeff Pontius, Corvus CEO stated:  “As we continue with the planned development of the South area Mayflower deposit targeting gold production in late 2014, these new high-grade gold and silver intercepts in the North area open the door for a very exciting new Nevada high-grade discovery.  The recent intercepts confirming and extending the spectacular mineralization found in hole NB-12-138 along with the substantial quartz vein thicknesses in the following three holes are giving shape to a significant new discovery that could dramatically change both the North Bullfrog project and the overall Corvus story.”

These results were used to target the hotter boiling zone part of the quartz vein system which led to the Yellow Jacket discovery in hole NB-12-138 (72.4 metres @ 1.74 g/t gold and 98.7 g/t silver including 4.3 metres @ 20 g/t gold and 1,519 g/t silver).  Structural analysis based on oriented core indicates that the mineralization in NB-12-138 is controlled by the intersection of the Blind and Mai Faults (Figure 1).  Holes NB-12-183 and NB-12-184 were designed to drill perpendicular to the plunge of that intersection (Figure 2) and successfully hit the target which appears to have an expanding vein system at depth. 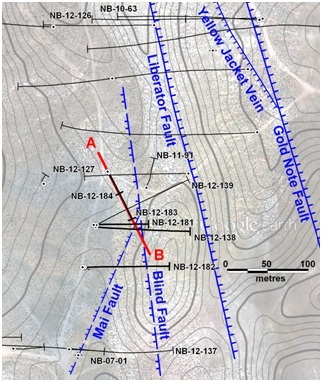 Figure 1:  Plan of the Yellow Jacket zone showing the major structures and the drill
holes related to the discovery of the high-grade vein system. 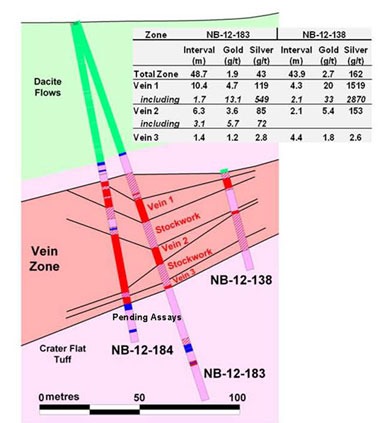 In general the Yellow Jacket Zone of high-grade, fault controlled, gold and silver mineralization has been encountered over a strike length of approximately 700 metres and remains open.  The mineralization is relatively shallow and could possibly be exploited as part of an expanded Sierra Blanca open pit, although to date this mineralization has not been included in the North Bullfrog resource estimate.  The structural concepts developed and proven at Yellow Jacket are now being applied to generate targets on the rest of the North Bullfrog property.  As part of this exploration program, Corvus is conducting an integrated high-grade targeting study that incorporates the new 3D IP geophysical data with new geological and structural mapping to further define and delineate these new targets.  To date, the Company has defined three additional high-grade targets in the North Area that will be tested during the 2013 exploration program as well as the deep high-grade vein potential below the Mayflower deposit.

Corvus controls 100% of its North Bullfrog Project, which covers approximately 43 km² in southern Nevada just north of the historic Bullfrog gold mine formerly operated by Barrick Gold.  The property package is made up of a number of leased patented federal mining claims and 461 federal unpatented mining claims owned by the Company.  The project has excellent infrastructure, being adjacent to a major highway and power corridor.  The Company’s independent consultants completed a robust positive Preliminary Economic Assessment on the existing resource in February 2012 (available atwww.sedar.com).

The project currently includes numerous prospective gold targets, with four (Mayflower, Sierra Blanca, Jolly Jane and Connection) containing an estimated Indicated Resource of 15 Mt at an average grade of 0.37 g/t gold for 182,577 contained ounces of gold and an Inferred Resource of 156 Mt at 0.28 g/t gold for 1,410,096 contained ounces of gold (both at a 0.2 g/t gold cutoff), with appreciable silver credits.  Mineralization occurs in two primary forms: (1) broad stratabound bulk-tonnage gold zones such as the Sierra Blanca and Jolly Jane systems; and (2) moderately thick zones of high-grade gold and silver mineralization hosted in structural feeder zones with breccias and quartz-sulphide vein stockworks such as the Mayflower and Yellowjacket targets.  The Company is actively pursuing both types of mineralization.

A video of the North Bullfrog project showing location, infrastructure, access and 2010 winter drilling is available on the Company’s website at http://www.corvusgold.com/investors/video/.