High silver values in several holes found in the North Sierra Blanca area adjacent to the Yellowjacket deposit suggests the presence of more Yellowjacket style high-grade mineralization between the two deposits.  In the Savage Valley area, hole NB-13-259 returned 38 metres @ 0.51g/t gold from 18 metres depth and hole NB-13-258 returned an intercept of 11 m of 0.7 g/t gold with high tellurium mineralization similar to that intercepted a half a kilometre to the west at Air Track Hill in hole NB-13-364 (NR14-01, January 9, 2014).  Corvus is still waiting for assays on the final 10 core holes drilled in 2013, most of which are from the northern and western extension of the Yellowjacket deposit.

Jeff Pontius, Chief Executive Officer, stated: “These encouraging results from our resource expansion program have highlighted two important points 1) the large bulk tonnage oxide deposit continues to grow and remains unconstrained, and 2) the presence of broad higher grade, high silver, stockwork zones is encouraging for finding more Yellowjacket type high-grade gold-silver zones.  This new data has helped outline several new high-grade targets for our 2014 program.  As the scale of the District-wide system continues to grow, this promises to be an exciting year.”

Results from nine new RC holes drilled on the northern end of Sierra Blanca have established good continuity and extended the known mineralization for about 300 metres to the north and 250 metres to the east (Table 1, Figure 1), thereby linking the Sierra Blanca deposit with the Yellowjacket deposit.  Oxidation along the ridge at Sierra Blanca North extends for some 200 metres in depth, which is about 100 metres deeper than originally projected in this area.  As a result, the potential to increase the tonnage of this portion of the deposit has increased (Table 1).

Broad zones of disseminated mineralization, such as NB-13-244 with 77 metres @ 0.25 g/t gold, have been found in all holes.  High level quartz stockwork mineralization seen at the surface has now been intersected in drilling, returning higher grades similar to those in the Yellowjacket such as hole NB-13-242 (41.2 metres @ 0.68 g/t gold from surface, including 10.7 metres @ 1.3 g/t gold –previously reported) and hole NB-13-246 (21.3 metres @ 0.46 g/t gold).  Core holes NB-13-373, 375 and 376 (assays pending) were drilled to test the continuity and possible grade enhancement at depth (Yellowjacket productive depths) of these newly discovered vein/stockwork zones.

In addition, holes NB-13-249, 250 and 251 not only demonstrate the continuity of lower grade disseminated mineralization, but also encountered intervals with anomalously high silver to gold ratios (Table 1, Figure 1).  These values are characteristic of the Yellowjacket high-grade mineralization and indicate that the high-grade veining extends into these areas.  Drilling in 2014 will be designed to investigate these occurrences as well.

Table 1: Significant intercepts* from recent reverse circulation
holes at North Sierra Blanca.
(All holes are vertical.  Reported drill intercepts are not true widths.  At this time, there is insufficient data with respect to the shape of the mineralization to calculate its true orientation in space.)

*Intercepts calculated using a 0.1g/t gold cutoff and up to 3 metres of internal waste.

Drill holes designed to evaluate a large un-drilled area between the southwest portion of Sierra Blanca and northern extension of the Savage Valley deposits have returned encouraging results which could potentially link the two proposed pits in future modeling.  The results from seven new holes show that low-grade mineralization extends through this area, with some significant shallow intercepts such as hole NB-13-256, where 75 of the top 105 metres is mineralized above cutoff, and NB-13-254 with 20 metres @ 0.26 g/t gold from 8 metres depth (Table 2, Figure 1).

Holes NB-13-258 and NB-13-259 both have significant intercepts at nearly 0.5 g/t gold (Table 2).  Of particular interest is the intercept of 10.7 metres @ 0.7 g/t gold in NB-13-258, which also has elevated tellurium similar to an intercept half a kilometre to the west at Air Track Hill (NR14-01, January 9, 2014).  As previously stated, tellurium is a strong indicator of high-grade gold mineralization.  Additional drilling is planned in the Savage Valley area to explore the potential southern extension of the Yellowjacket high-grade deposit into this large area of low-grade mineralization (which has some indicators that are similar to the setting at Sierra Blanca to the north).

Table 2: Significant intercepts* from recent RC holes between
Sierra Blanca and Savage Valley.
(All holes are vertical.  Reported drill intercepts are not true widths.  At this time, there is insufficient data with respect to the shape of the mineralization to calculate its true orientation in space.)

*Intercepts calculated using a 0.1g/t gold cutoff and up to 3 metres of internal waste. 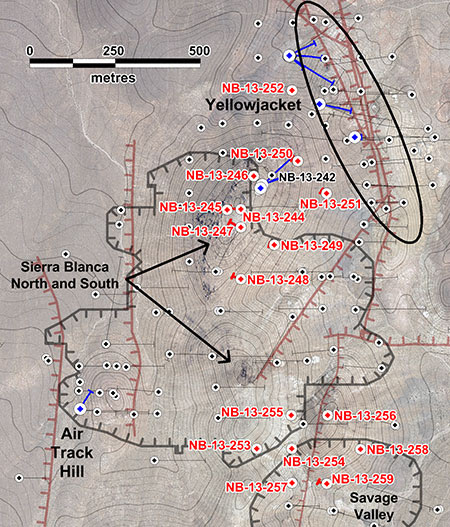 Corvus Gold Inc. is a North American gold exploration company, which is focused on advancing its 100% controlled Nevada, North Bullfrog project towards a potential development decision.  In addition the Company controls a number of other North American exploration properties representing a spectrum of gold, silver and copper projects.  Corvus is committed to building shareholder value through new discoveries and leveraging noncore assets via partner funded exploration work into carried and or royalty interests that provide shareholders with exposure to gold production.