Vancouver, B.C. – Corvus Gold Inc. (“Corvus” or the “Company”) – (TSX: KOR, OTCQX: CORVF) announces a new resource update incorporating all drill results from 2012 and 2013 at its 100% owned North Bullfrog Project, Nevada. This resource calculation is the first to incorporate drill results from the expanding Yellowjacket Deposit and is the first quantified estimate of its potential grade impact on the overall project (Table 1 & 2).

The high-grade Yellowjacket Deposit is a mineralized corridor between two major faults currently defined by the Josh Vein on the west and the Liberator Fault on the east.  The Josh Vein has been drilled on 50 metre fences for approximately 600 metres along strike to an average vertical depth of 120 metres and accounts for the bulk of the indicated resource at Yellowjacket (Table 1).  All of the 125,000 indicated ounces of gold and 800,000 ounces of inferred gold at 0.3 g/t cutoff in the Yellowjacket Deposit are new additions to the previous resource estimate and could have a major impact on future mine plans due to their higher gold and silver grade. The Yellowjacket structural zone has further potential to host more vein systems similar to the Josh Vein both to the west and east which will be tested during the current phase of exploration.

The Yellowjacket Deposit remains open along strike in all directions including down dip. The depth potential is best reflected by hole NB-13-370, drilled in late 2013 towards the northern extension of the zone, to a down dip extent of 170 metres, which intersected one of the best vein intervals drilled to date near the bottom of the hole (4.9m @ 21.2 g/t gold & 117.0 g/t silver).  The Company’s current 2014 drill program is targeting the extension of the Yellowjacket Deposit and prospective high-grade vein systems within the deposit area.

At present Yellowjacket and the disseminated resources are being calculated with different cutoff grades because of differences in the gold deportment. The gold at Yellowjacket occurs as native gold and silver sulfides in quartz veins occurring within a major District scale structural zone.  Initial metallurgical test work show gold and silver are readily cyanide soluble and work is ongoing to determine how to most effectively maximize extraction.  A NI 43-101 report on this new resource update will be filed on Sedar within 45 days.

Jeff Pontius Corvus Gold CEO states… “This updated resource estimate that includes our new high-grade Yellowjacket Deposit is our first indication of the significant impact this new and growing discovery will have on our current plus million ounce project. We are currently engaged in detailed mining and recovery optimization analysis of this high-grade mineralization so we can maximize its financial performance for the project as a whole and assess the impact of further resource growth.  Our drilling focus remains on continued expansion of the Yellowjacket Deposit along strike, at depth and for new parallel systems to further unlock the value of this amazing new Nevada high-grade gold-silver discovery.”

Giroux Consultants Ltd., of Vancouver BC, has produced the updated mineral resource estimate (effective as at 23 February, 2014), based on resource drilling in the Sierra Blanca and Yellowjacket areas of the District that occurred in 2012 and 2013. The new resource calculation includes an additional 16,209 samples derived from 111 holes totalling 23,020 metres with an average depth of 207 metres.  The resource also incorporates an updated geologic model and additional rock density data. Previous resource estimates from the Jolly Jane, Mayflower and Connection deposits have not been updated in this report because no additional drilling has been conducted in those resource areas. The locations of individual resource areas are shown in Figure 1.

The disseminated mineralization at Sierra Blanca was also modeled in a series of discrete volumes to prevent grade from smearing across certain important grade controlling faults.

The North Bullfrog district-wide global oxide resource includes five deposit areas, Sierra Blanca, Air Track West, Jolly Jane, Mayflower and Connection.  These deposits are characterized by broad tabular bodies of at or near surface, with low-grade disseminated, oxidized gold and silver mineralization. The current disseminated oxidized mineral resource, based on a cut-off grade of 0.1 g/t gold (“COG”), is listed in Tables 3 and 4.  The 0.1 g/t cutoff was established in the PEA published in October of 2013. There is disseminated sulphide material below the oxide zone and a resource has been estimated for that part of the deposit (Table 5).

The Yellowjacket, Sierra Blanca and Jolly Jane deposits remain open and are current exploration targets for the Company in 2014. 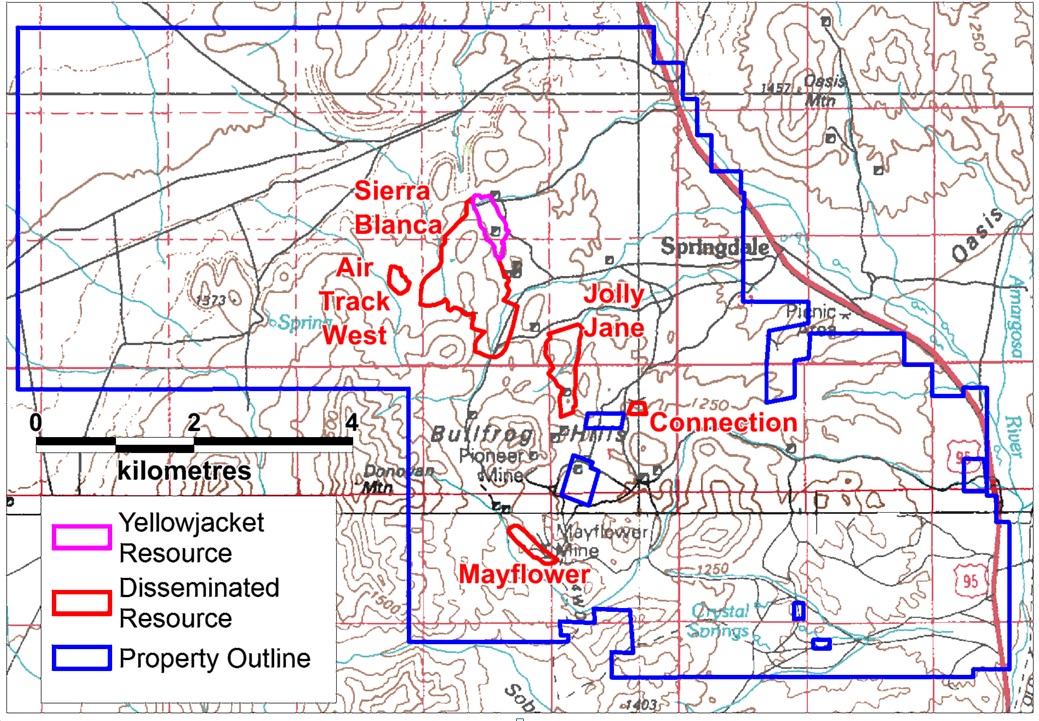 The Yellowjacket resource area is immediately east of the Sierra Blanca deposit and was modeled as a specific zone within the greater Sierra Blanca deposit.  The zone has a North-Northwest trend and is currently defined by the Josh Vein on the west and the Liberator Fault on the east. This zone includes vein and stockwork vein type mineralization controlled by the interaction of the two structures. While the main vein drilled to date has a NNW trend, the step over structures between the main faults appear to have a north-easterly trend.  Although the bulk of the indicated mineralization within the current resource is hosted by one vein system three others have been intersected with the drilling and will be further explored with the ongoing exploration program.

Corvus controls 100% of its North Bullfrog Project, which covers approximately 68 km² in southern Nevada just north of the historic Bullfrog gold mine formerly operated by Barrick Gold Corp.  The property package, shown in Figure 2, is made up of a number of private mineral leases of patented federal mining claims and 758 federal unpatented mining claims.  The project has excellent infrastructure, being adjacent to a major highway and power corridor.

Mineralization occurs in two primary forms: (1) broad stratabound bulk-tonnage gold zones such as the Sierra Blanca and Jolly Jane systems; and (2) moderately thick zones of high-grade gold and silver mineralization hosted by structural zones with breccias and quartz-sulphide vein stockworks such as the Yellowjacket target.  The Company is actively pursuing both types of mineralization.

Carl E. Brechtel, (Nevada PE 008744 and Registered Member 353000 of SME), a qualified person as defined by National Instrument 43-101, has supervised execution of the work outlined in this news release and has approved the disclosure herein. Mr. Brechtel is not independent of Corvus, as he is the COO and holds common shares and incentive stock options.

Mr. Scott E. Wilson, CPG, President of Metal Mining Consultants Inc., is an independent consulting geologist specializing in Mineral Reserve and Resource calculation reporting, mining project analysis and due diligence evaluations.  He is acting as the Qualified Person, as defined in NI 43-101, for the description of the general site information, the mineral exploration, and the site geology portions of the Report.  Mr. Wilson has over 23 years experience in surface mining and is a Registered Member of Society of Mining, Metallurgy and Exploration.  Mr. Wilson and Metal Mining Consultants, Inc. are independent of the Company under NI 43-101.

Corvus Gold Inc. is a North American gold exploration and development company, focused on its near-term gold-silver mining project at North Bullfrog, Nevada.  In addition the Company controls a number of other North American exploration properties representing a spectrum of gold, silver and copper projects.  Corvus is committed to building shareholder value through new discoveries and the expansion of those discoveries to maximize share price leverage in a recovering gold and silver market.