Vancouver, B.C……..Corvus Gold Inc. (“Corvus” or the “Company”) – (TSX: KOR, OTCQX: CORVF) announces results from the initial exploration program on its newly acquired Gerfaut Project in Quebec.  Gold mineralized rocks were found over an 11 kilometre strike length with several areas of outcropping copper and gold mineralization outlining a major new discovery (Figure 1).  Multiple styles of mineralization were encountered including gold with base metals, silver-lead mineralization and copper only stockwork mineralization (Figure 2, Table 1).  On the basis of these positive results, the claim position has been expanded from 24 km2 to 75 km2 and plans have begun for an aggressive 2013 exploration season, including additional surface exploration work and a discovery phase drill program.

Corvus CEO Jeff Pontius commented, “These very positive results, together with the results reported by Khalkos Exploration Inc. to the north, the extensive mineralized Cape Smith (Raglan) belt directly to the south and historic drilling by Falconbridge Limited during the mid-1990’s, leads us to believe that this unexplored region of northern Quebec has the potential to host major new copper and gold deposits.  Corvus’ first mover position in this new and emerging mineral belt has given it a unique opportunity to acquire some of the most prospective ground in the belt in one of the best mining jurisdictions in the world.  Gerfaut could represent another major discovery for the Corvus exploration team and produce significant downstream growth potential for our company as we augment our future anticipated production profile.”

The 2012 exploration program has outlined a number of possibly intrusion-related mineral occurrences which could reflect the district-scale zoning of a very dynamic copper-gold system.  Gold mineralization occurs in massive sulphide veins and with disseminated arsenopyrite in shear zones.  Silver mineralization occurs with galena in quartz veins while copper occurs as chalcopyrite in the form of replacement patches or in high temperature veins associated with pyrrhotite and/or pyrite.  The overall size of the alteration system and areal extent of mineralization is significant.  At present, it is not clear as to precisely what genetic gold depositional model to apply, although it will likely be a combination of structural and stratigraphic controls.

On the basis of these initial positive results, the claim position has been expanded to both the north and the east to cover the extensions of mineralization and an additional block, called the Contact Block, was staked to the northeast of Gerfaut (Figure 4).  Initial results from 25 selected rock grab samples collected on the Contact Block returned 10 samples containing greater than 0.1% copper including one with 0.5% (the minimum copper grade was 0.004% and the average of all 25 samples was 0.12%).

Figure 3: Gerfaut claims showing distribution of gold in traditional soil samples.  The intensity of the gold anomaly may be dampened by the till dilution of the bedrock response, particularly in the NE portion of the property, however, rock outcrop sampling has confirmed that even low level gold in soils may reflect the presence of mineralization. 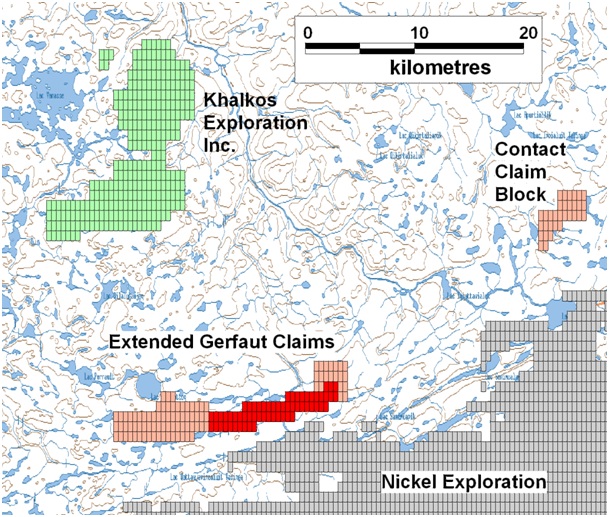 About the Gerfaut Project, Quebec

The Gerfaut property is located in the Paleoproterozoic trans-Hudsonian orogen of northern Quebec.  Gold and copper mineralization is hosted in meta volcanic and meta sedimentary rocks of the Parent Group.  The property was discovered in 1995 by Falconbridge while prospecting for nickel in the region.  In 1996 Falconbridge drilled two holes, both of which encountered gold mineralization including 5.8 metres of 4.27 g/t gold in PAR96-01.  In 1997 Falconbridge optioned the property to Exploration Boréale Inc. who conducted ground geophysical surveys and collected a number of mineralized rock samples over the property but did not do additional drilling.  Eventually the core claims reverted to Les Resources Tectonic Inc. (“LRT”).

The Gerfaut Project is being explored under a joint venture agreement with LRT, in which the Company can earn a 60% interest by incurring $565,000 on exploration and making payments to LRT of $225,000 over 5 years.  After having earned its initial 60% interest, the Company can earn an additional 20% by incurring an additional $3,000,000 of expenditures over 3 years.  LRT will retain a 2% Net Smelter Return, of which the Company can buy back 1% for $1,500,000.  Following the Company having earned its 60% or 80% interest, as applicable, the parties will enter into a joint venture in which each party will be required to contribute its proportionate share of ongoing expenditures.  If either participant should dilute to a 10% or lesser interest, its interest will automatically be converted to a 3% Net Profit Interest.

The newly staked claims are owned 100% by Corvus and are not subject to the joint venture with LRT.

The work program at Gerfaut was designed and supervised by Russell Myers (CPG 11433), President of Corvus, who is responsible for all aspects of the work, including the quality control/quality assurance program.  On-site personnel at the project log and weigh all samples prior to sealing and shipping.  Quality control is monitored by the insertion of blind certified standard reference materials and blanks into each sample shipment.  Sample shipments are sealed and shipped to ALS Chemex in Val d’Or, Quebec.  Preparation and assaying may be done in ALS facilities in Val d’Or, Sudbury or Vancouver.  ALS Chemex’s quality system complies with the requirements for the International Standards ISO 9001:2000 and ISO 17025:1999.  Analytical accuracy and precision are monitored by the analysis of reagent blanks, reference material and replicate samples.  Finally, selected pulps are forwarded to an ISO compliant third party laboratory for additional quality control.

Corvus Gold Inc. is a resource exploration company, focused in Nevada, Alaska and Quebec, which controls a number of exploration projects representing a spectrum of early-stage to advanced gold projects.  Corvus is focused on advancing its 100% owned Nevada, North Bullfrog project towards a potential development decision and continuing to explore for new major gold discoveries.  Corvus is committed to building shareholder value through new discoveries and leveraging noncore assets via partner funded exploration work into carried and or royalty interests that provide shareholders with exposure to gold production. Context for the Gold Stocks..