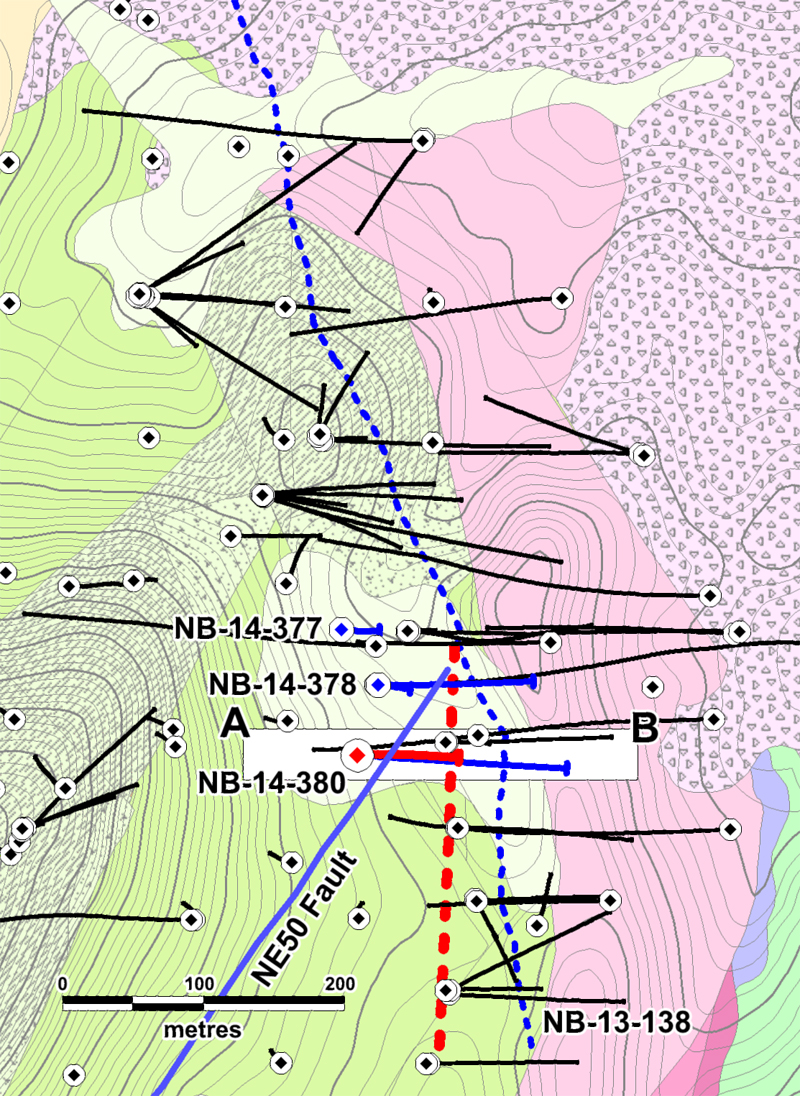 Assays are pending for the remainder of NB-14-380, which includes mineralized surrounding stockwork veining similar to the Josh Vein to the east. This represents an important addition to the vein system at Yellowjacket and illustrates the new discovery potential for additional high-grade veins even in the immediate Yellowjacket Deposit area.

Jeff Pontius Corvus Gold CEO states… “This new vein system which is similar to the Josh Vein immediately to the east, offers great potential to significantly expand the Yellowjacket Mineralized Zone. The location of this new high-grade mineralization within the overall larger low-grade Sierra Blanca deposit bodes well for other internal high-grade targets to be tested this year. The southern extent of this new system is completely open and could add dramatically to the overall value of the North Bullfrog project and Corvus as a whole.”

Table 1
Assays from NB-14-380 Quartz Vein Intercepts
(Reported drill intercepts are not true widths. At this time, there is insufficient data with respect to the shape of the mineralization to calculate its true orientation in space.)

*Intercepts calculated at a 0.1 g/t gold cutoff and with up to 1 metre of internal waste.

The Yellowjacket Zone has been defined by the Liberator Fault on the east and the Josh Vein Fault on the west (Figure 2). Geological evaluation of Yellowjacket Zone after the close of the 2013 drill program indicated that the fault displacement mapped along the central part of the Josh Vein structure was not enough to account for the full stratigraphic offset indicated by other drilling to the west. On this basis it was postulated that another strand of the fault should exist west of the known Josh Vein structure. Holes NB-14-377 (assays pending) and NB-14-378 (9.2m @ 17.9 g/t gold and 260 g/t silver) and NB-13-279 confirmed the existence of the missing structure and now hole NB-14-380 has demonstrated the continuity for 100 metres along strike. As shown in Figure 2 there is also clear evidence for a third fault to the west of the West vein structure. This fault, known as the NE50 Fault from surface geology, has a north-easterly strike which is one of the important mineralized vein orientations (Figure 1). The fact that a second vein is developed between these two faults in NB-14-380 could indicate that the NE-trending fault will also be mineralized if the structure is developed in the correct host rock. The silver to gold ratio of the West Vein system is much higher than normal for the Josh Vein farther north and is more similar to the discovery hole NB-12-138 (4.3m @ 20.0 g/t gold & 1,519 g/t silver).

As discussed previously (NR-14-08, March 3, 2014) the vein structure consistently pinches out as it approaches the surface and this is the case with NB-14-381 (Figure 2). However, the vein does continue to depth and was encountered in NB-14-382 (assays pending). This means that all potentially mineralized structures have to be tested at depth because the lack of mineralization near the surface is not a conclusive test of their potential. 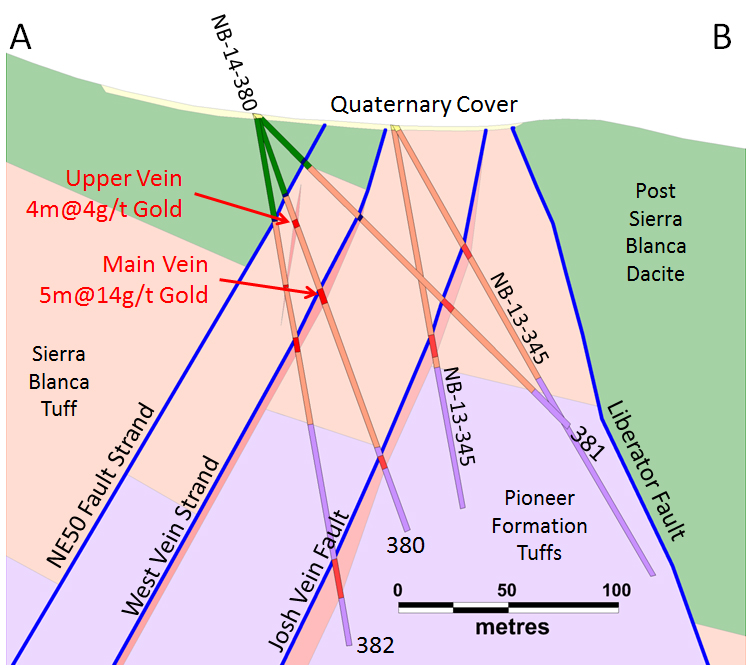 Figure 2: Cross section through NB-14-380 showing location of West Vein relative to the vein drilled in 2013. The fault to the west of the West Vein represents a potential target for future exploration.

Corvus controls 100% of its North Bullfrog Project, which covers approximately 68 km² in southern Nevada just north of the historic Bullfrog gold mine formerly operated by Barrick Gold Corp. The property package is made up of a number of private mineral leases of patented federal mining claims and 758 federal unpatented mining claims. The project has excellent infrastructure, being adjacent to a major highway and power corridor.

In addition to the Yellowjacket deposit the District has a large low-grade oxide resource contained in five at surface deposits (Sierra Blanca, Air Track West, Jolly Jane, Mayflower and Connection) containing an estimated Oxidized Indicated Resource of 36.7 Mt at an average grade of 0.26 g/t gold for 307,860 ounces of gold and an Oxidized Inferred Resource of 242 Mt at 0.18 g/t gold for 1,366,000 ounces of gold (both at a 0.1 g/t gold cutoff), with appreciable silver credits. Unoxidized Inferred mineral resources are 213 Mt at 0.16 g/t for 1,117,000 ounces of gold (at a 0.1 g/t gold cutoff).

Jeffrey A. Pontius (CPG 11044), a qualified person as defined by National Instrument 43-101, has supervised the preparation of the scientific and technical information that form the basis for this news release and has approved the disclosure herein. Mr. Pontius is not independent of Corvus, as he is the CEO and holds common shares and incentive stock options.

The work program at North Bullfrog was designed and supervised by Russell Myers (CPG 11433), President of Corvus, and Mark Reischman, Corvus Nevada Exploration Manager, who are responsible for all aspects of the work, including the quality control/quality assurance program. On-site personnel at the project log and track all samples prior to sealing and shipping. Quality control is monitored by the insertion of blind certified standard reference materials and blanks into each sample shipment. All resource sample shipments are sealed and shipped to ALS Chemex in Reno, Nevada, for preparation and then on to ALS Chemex in Reno, Nevada, or Vancouver, B.C., for assaying. ALS Chemex’s quality system complies with the requirements for the International Standards ISO 9001:2000 and ISO 17025:1999. Analytical accuracy and precision are monitored by the analysis of reagent blanks, reference material and replicate samples. Finally, representative blind duplicate samples are forwarded to ALS Chemex and an ISO compliant third party laboratory for additional quality control.

Corvus Gold Inc. is a North American gold exploration and development company, focused on its near-term gold-silver mining project at North Bullfrog, Nevada. In addition the Company controls a number of other North American exploration properties representing a spectrum of gold, silver and copper projects. Corvus is committed to building shareholder value through new discoveries and the expansion of those discoveries in a recovering gold and silver market. Breakout in Gold and Gold Miners!