Vancouver, B.C… Corvus Gold Inc. (“Corvus” or the “Company”) – (TSX: KOR, OTCQX: CORVF) announces initial assay results from three core holes along the northern extension of the Yellowjacket deposit, and two core holes from the western extension of the Sierra Blanca deposit, at the North Bullfrog Project, Nevada.  Drill hole NB-13-368 at the Yellowjacket deposit returned 33.3 metres @ 4.14 g/t gold and is 140 metres along strike from the previously reported intersection (NB-13-360, 9.6 metres @ 6.34 g/t gold – NR13-32, December 5, 2013).  Corvus has now reported results from within the high-grade Yellowjacket deposit at approximately 50 metre spaced drill fences over a current strike length of approximately 600 metres, within a structural zone ranging from 100-150 metres in width and to a nominal depth of about 150 metres.  The system remains open in all directions and indications from RC grid drilling to the west and northeast suggest additional vein zones may be present in those areas.

Corvus is awaiting assays from another 26 drill holes which are a mix of core and RC drilling testing the strike extension of the Yellowjacket deposit and two newly discovered vein systems between Yellowjacket and Air Track Hill (Figure 1).  Significantly, gold-tellurium mineralization, typically associated with bonanza grade gold systems, has now been discovered at Air Track Hill, located over a kilometre to the southwest of the Yellowjacket deposit and at the southwestern edge of the limit of the existing Sierra Blanca drilling.  This newly-discovered mineralization will be one of the focuses of the pending 2014 drilling program scheduled to begin at the end of January, 2014.

A number of holes which have cut the veins still have assays pending, including NB-13-369, 370 and 372.  Gold and silver continue to occur in these intersections as very fine grains of electrum, native gold and acanthite, a leachable silver sulfide.

Jeff Pontius, Chief Executive Officer, stated: “The remarkable consistency and expansion potential of the mineralization in the Yellowjacket deposit is encouraging for outlining a major new high-grade gold discovery here in Nevada.  In addition, the discovery of a new broad higher grade oxide gold-tellurium zone at Air Track Hill represents a completely new style of gold mineralization that bodes well for developing other new Yellowjacket type high-grade zones.  With the results of each new hole returned from North Bullfrog, our assessment of the potential of this new Nevada Gold District grows.”

Table 1: Significant intercepts* from recent core holes at Yellowjacket.
(Reported drill intercepts are not true widths.  At this time, there is insufficient data with respect to the shape of the mineralization to calculate its true orientation in space.)

*Intercepts calculated using a 0.1g/t gold cutoff and up to 1 metre of internal waste.

At Air Track Hill, located on the southwestern edge of the Sierra Blanca deposit, a new type of higher grade gold-tellurium mineralization has been discovered in hole NB-13-364 (Figure 1, Table 1).  This type of mineralization is frequently associated with high-grade gold systems around the world, with the most famous being the Cripple Creek District in Colorado.  Hole NB-13-364 revealed a shallow mineralized zone with 23 metres @ 1 g/t gold from 17 metres depth, including 4 metres of 2.2 g/t gold (Table 2).  The silver to gold ratio of the mineralization is 1:10, which is exactly the opposite of the 10:1 ratio in the Yellowjacket quartz veins and much lower than the normal 1:1 ratio in the disseminated mineralization (Tables 1 and 2).  The mineralization is hosted in a strongly altered pyroclastic unit with associated iron-oxide breccia veinlets.  The average tellurium content of the zone is 5 ppm, with a high value of 36 ppm.  Initial structural data suggests that the mineralization has a north-easterly strike similar to the newly discovered vein type mineralization within the main Sierra Blanca deposit.  Hole NB-13-365 was drilled to confirm the orientation of the mineralized zone (assays pending).

Core drilling on the northwestern edge of the Sierra Blanca deposit has also revealed a potentially new high-grade structural zone, thereby opening up potential mineralization to the west under an extensive area of shallow pediment cover.  This new zone is hosted in a dacite unit, which typically has been barren but this intersection and the one in hole NB-13-361 in the Yellowjacket deposit 700 metres to the east are changing that assumption.  Core hole NB-13-366 returned an intercept of 47 metres @ 0.9 g/t gold and 1 g/t silver from 41 metres depth (Table 2).

Table 2: Significant intercepts* from recent core holes at Air Track Hill and West Sierra Blanca.
(Reported drill intercepts are not true widths.  At this time, there is insufficient data with respect to the shape of the mineralization to calculate its true orientation in space.)

*Intercepts calculated using a 0.1g/t gold cutoff and up to 1 metre of internal waste. 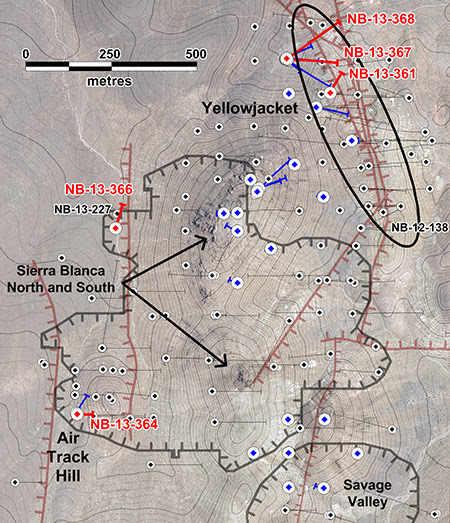