Complete assays from NB-13-353 show that, in addition to the main vein (7.9 metres @ 10.36 g/t gold and 105.61 g/t silver), there are multiple zones of veining that extend the entire length of the hole (Table 1).  These veined intervals occur in a variety of lithologies and, together with NB-13-350 (1.8 metres @ 2.35 g/t gold and 6.62 g/t silver), indicate that the corridor between the main Yellowjacket structures has the potential to host multiple new high-grade vein zones (Figure 1).

Jeff Pontius, Chief Executive Officer, stated: “The extension of the Yellowjacket system several hundred metres to the north, as shown by holes NB-13-350 & 352, dramatically expands this high-grade portion of the North Bullfrog deposit.  In addition, the multiple new vein zones identified in hole 352 and the recently announced new vein zone discoveries in RC holes to the west are outlining the potential for continued expansion of high-grade vein system to the west and north.

When put in the context of the greater North Bullfrog District potential and the fact that Sierra Blanca is only the first of several high priority targets to be explored, the overall potential of the Company’s North Bullfrog property is demonstrably significant.

Table 1: Significant intercepts* from recent core holes at Yellowjacket.
(Reported drill intercepts are not true widths.  At this time, there is insufficient data with respect to the shape of the mineralization to calculate its true orientation in space.)

*Intercepts calculated with 0.1 g/t gold cutoff and up to 3 metres of internal waste.

Drill hole NB-13-352 was drilled approximately 150 metres north of NB-13-350, where the first eastern quartz veins were discovered.  The silver to gold ratio in both holes suggests that the high-grade veins are part of the overall Yellowjacket system.  The upper intercept in NB-13-352 is in the same structural position as the veining in NB-13-350, indicating a likely continuity of veining.  The second high-grade intercept in NB-13-352 is in a new position and may represent yet another new vein zone. 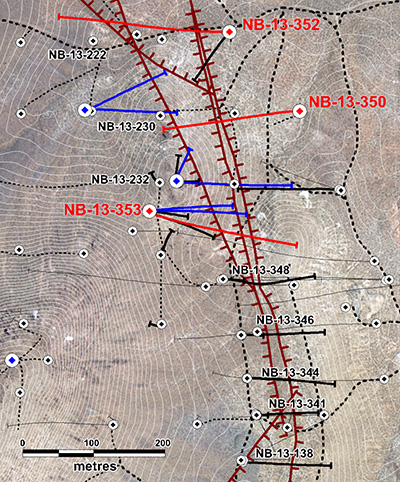