Corvus Gold founder and CEO Jeff Pontius joined us again to discuss todays news release which is posted below.

Vancouver, B.C… Corvus Gold Inc. (“Corvus” or the “Company”) – (TSX: KOR, OTCQX: CORVF) announces the latest results from six holes of the 2014 Phase One drill campaign at the North Bullfrog Project in Nevada.  Results include complete assays for hole NB-14-391, two additional holes from the northern extension of the Yellowjacket, and three holes from the southern portion of the West and Josh Vein (main vein).  Significantly, a new zone of high-grade gold and silver was intersected to the east of the main Josh Vein, representing the potential for another parallel system.  The Yellowjacket system is currently nearly a kilometre in strike length, 200 metres down dip and open in all directions.

The Phase Two 2014 drill campaign commenced September 3rd with an addition of a second core rig.  The focus of drilling will continue to be at Yellowjacket, and will target:

Following the completion of the 2014 drill program, the Company anticipates issuing a resource update in Q1 2015 and a new Preliminary Economic Assessment (PEA) in Q2 2015.

Drill hole NB-14-392 intersected the Josh Vein and its surrounding stockwork and continued to test a parallel target to the east of the main vein zone called the Rhyolite Zone (referring to its host rock).  The hole was successful in intersecting 11.3 metres @ 3.3 g/t gold and 4 g/t silver in this new zone.  This intersection is a follow-up to the original discovery hole drilled last year (NB-13-352 with 2.4 metres @ 7.6 g/t gold and 6.9 g/t silver, see NR13-29, October 29, 2013) and confirms its strike and dip.  The Rhyolite Zone dips to the east similar to the Liberator Zone (50 metres east) and potentially represents a new high-grade vein system similar to the West Vein discovery made earlier this year.

Holes NB-14-390, 391 and 392 have been drilled on the northern extension of the Josh Vein (Figure 1).  The final complete vein plus stockwork intercept for NB-14-391 returned 18 metres of 8.5 g/t gold and 34 g/t silver.  Hole NB-14-392, which represents a 40 metre step out to the north from NB-14-391 encountered 9.3 metres of 1.9 g/t gold and 12 g/t silver in the Josh Vein.  In hole NB-14-390 the Josh Vein zone is present as thin silver-rich quartz veining within highly altered host rock which limited main vein development and thus resulted in less mineralization due to a lack of vein density (Table 1).

Jeff Pontius, Corvus CEO, stated “These new results continue to illustrate the potential of the Yellowjacket system and its ability to grow.  An important example of this growth potential is the high-grade mineralization within the new Rhyolite Zone and its similarity to initial holes in the West Vein discovery made earlier this year.  The continued expansion of the Yellowjacket zone along strike and at depth highlights the so far unconstrained potential of this new Nevada high-grade discovery.  Corvus’s ongoing exploration work is expanding the scope and size of the Yellowjacket Deposit, thereby potentially increasing the overall value of Corvus in the future.”

*The veining and stockwork veining have been defined by geological observation of the percentage of veining in the interval, e.g. significant concentrations of veining in the immediate hangingwall and footwall of a significant vein. Outside of the immediate hangingwall and footwall zones a cutoff of 0.3g/t gold equivalent has been used assuming a 59:1 price ratio of gold to silver.  Up to 2 metres of internal waste has been carried locally. 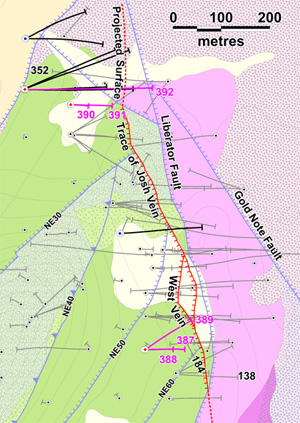 Figure 1: Location of 2014 drill holes at Yellowjacket.  Assays from the holes indicated in fuscia are reported in this release.  Black traces are from holes with pending assays.  Holes are labeled with last 3 digits of name.

The vein zone within the Yellowjacket at North Bullfrog is currently defined by the Josh Vein/West Vein structural zone on the west and the Liberator Fault to the east (Figure 1).  The interaction of these two faults has created a large, highly broken, zone which contains several quartz veined structures, such as the Josh Vein, which is surrounded by broad zones of stockwork mineralization.  The West Vein Zone discovered and delineated in the early 2014 drill program represents a new hanging wall zone west of the main Josh Vein Zone.  Ongoing drilling is continuing to intersect new vein structures, such as the footwall Rhyolite Zone in NB-14-392, within and around the overall Yellowjacket Deposit.  Drilling now indicates that previously defined northeast faults do not cut off the Josh Vein Zone going north or south, but actually appear to enhance it as a host for vein development and have therefore emerged as new exploration targets.

Corvus controls 100% of its North Bullfrog Project, which covers approximately 68 km² in southern Nevada.  The property package is made up of a number of private mineral leases of patented federal mining claims and 758 federal unpatented mining claims.  The Project has excellent infrastructure, being adjacent to a major highway and power corridor as well as a large water right.

The exploration work program at North Bullfrog was designed and supervised by Russell Myers (CPG 11433), President of Corvus, and Mark Reischman, Corvus Nevada Exploration Manager, who are responsible for all aspects of the work, including the quality control/quality assurance program.  On-site personnel at the project log and track all samples prior to sealing and shipping.  Quality control is monitored by the insertion of blind certified standard reference materials and blanks into each sample shipment.  All resource sample shipments are sealed and shipped to ALS Minerals in Reno, Nevada, for preparation and then on to ALS Minerals in Reno, Nevada, or Vancouver, B.C., for assaying.  ALS Minerals’s quality system complies with the requirements for the International Standards ISO 9001:2000 and ISO 17025:1999.  Analytical accuracy and precision are monitored by the analysis of reagent blanks, reference material and replicate samples.  Finally, representative blind duplicate samples are forwarded to ALS Chemex and an ISO compliant third party laboratory for additional quality control.

Corvus Gold Inc. is a North American gold exploration company, which is focused on advancing its 100% controlled Nevada, North Bullfrog project towards a potential development decision.  In addition, the Company controls a number of other North American exploration properties representing a spectrum of gold, silver and copper projects.