This essay is based on the Premium Update posted on December 1st, 2010

There is a good reason why the U.S. government prints the phrase “In God We Trust” on the currency. You have to have faith that the pieces of papers you carry in your wallet have value and that you can exchange goods and services for those bits of paper. Fiat money is not “backed up” by anything; intrinsically it is useless paper (nowadays not even that, but mere electronic bookkeeping entries). It is valuable only as far as people believe in its anticipated purchasing power.

When a few weeks ago the US Federal Reserve said it would create another $600 billion to buy US Treasury debt, that made a total of $2.3 trillion added since the Fed began its QE program almost two years ago. In terms of simple math, Ben Bernanke has added three times as many dollars to America’s core money supply as all the previous treasury secretaries and Fed chairmen put together.

To create fiat money all you need is ink, paper and the printing press. Gold, on the other hand, requires gold mines, workers, expensive equipment and time. There will never be limitless, unending supplies of gold.

The U.S. dollar has lost around 33% of its value in the past 10 years. This decline took place because the world is waking up to the awful realization that America has borrowed and spent its way into a hole. Meanwhile, gold has climbed from $300 per ounce to over $1,400 an ounce.

Fiat money requires that consumers and investors and nations have faith in it, something the U.S. dollar is rapidly losing – despite the recent upswing in the USD Index. As long as that continues to happen, people will turn to something tangible which they can trust – gold and silver.

Speaking of gold, let’s take a look at its long-term chart (charts courtesy of http://stockcharts.com.) 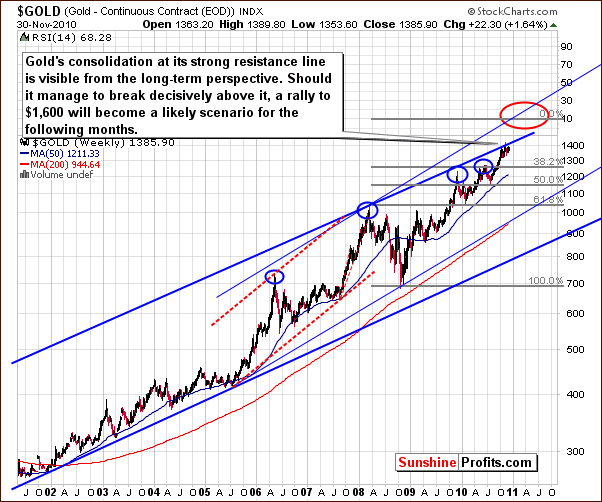 One the above chart, we have a major development worth noting. The consolidation period is now visible here as it has been ongoing for nearly 2 months. It began back in October after gold reached the upper border of the very long-term trading channel.

It is possible that we will now see gold’s price break out above recent price levels and the $1,600 target level remains valid. This target is obtained reached by analyzing the 1.618 phi number and extrapolating the upper border of the accelerated trading channel (marked with a red ellipse on the above chart).

With all of these bullish signals present, let’s consider what could invalidate them. There’s one thing that one of our Subscribers asked us about, and it’s featured on the chart below. 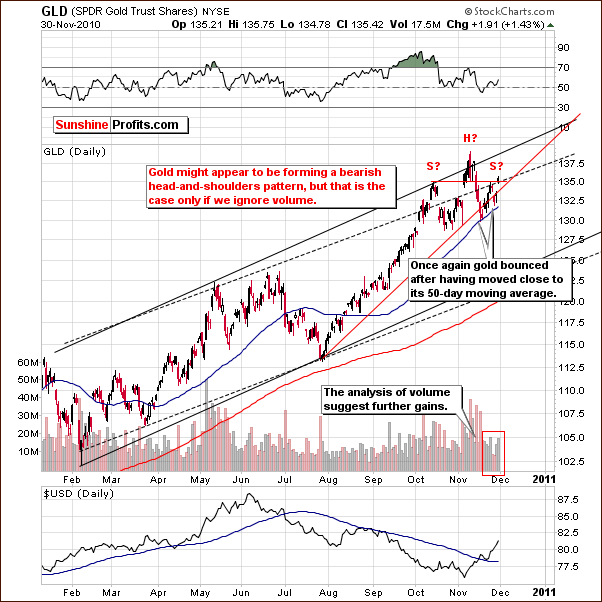 Gold’s short-term chart at first glance appears to reveal a possible bearish head and shoulders formation. This is however not yet confirmed. When such a situation arises, it is important to study recent volume trends. What we have seen lately is strong volume with rising prices and lower volume when prices decline. For this reason, the bearish head and shoulders pattern should not be of major concern today.

Gold’s price has been stopped recently at the intersection of several resistance lines but daily volume levels and other signs indicate gold’s next move is likely to be up. Such a move would immediately invalidate the bearish head and shoulder’s pattern and would likely result in a suggestion on our part to increase speculative positions in gold, silver, and mining stocks. 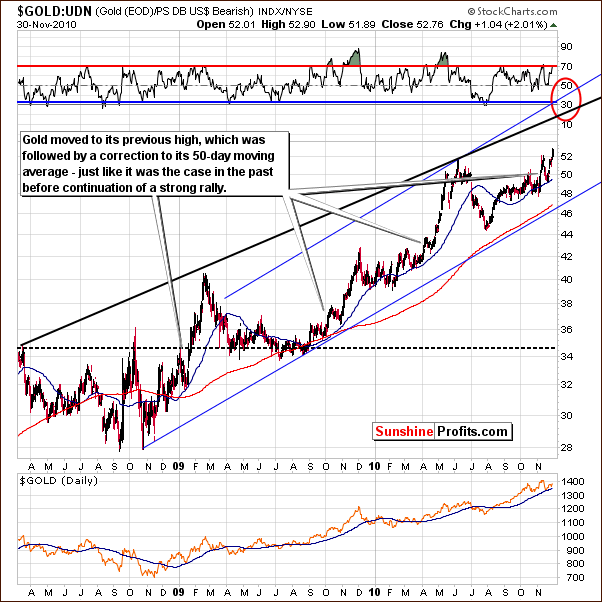 From a non-USD perspective, we see how gold’s price movements differ between non-USD markets and its price based on the dollar. Since our last update, we have seen a near perfect bounce off the 50-day moving average for non-USD gold prices. In the previous Premium Update we commented:

Gold moved to its previous high, which was followed by a correction to its 50-day moving average – just like it was the case in the past before continuation of a strong rally.

Non-USD investors have seen price movement above previous highs, which has not yet been seen on the USD side. The upside from a non-USD perspective appears to have been higher, mostly due to the weakness of the euro. We wrote about this as likely outcome in our Premium Update two weeks ago:

At this time for non-USD investors it seems best to hold long-term positions and enter small speculative positions right away. The reason we feel that speculative positions can be taken ahead of the correction is two-fold. First, the timing of any correction is quite difficult to pinpoint as the precious metals stopped responding to USD rallies, and secondly, the correction appears as though it will likely be quite small. Furthermore, the rally, which will likely follow could last for several months, thus making any small price decline, which was missed insignificant.

The target for gold priced in currencies other than the dollar is much higher than gold is today (marked with red ellipse on the above chart), so there is still much room for further gains. Meanwhile, it seems that Investors who held their positions at that time are happy that they did.

Summing up, although recent price action in the short-term shows some bearish signs, daily volume levels dispel this sentiment. The head and shoulders pattern has not been confirmed and likely will not be. The positive signs from volume levels far outweigh this coincidental pattern and we remain bullish for gold in the short-, medium-, and long-term. From a non-USD perspective, gold is seeing new highs and the outlook remains strongly bullish.