Reprinted from Short Side of Long Blog

Before I start writing about Gold Miners, which is the topic of today’s article on the blog, I would like to lead into the story with a currency introduction. I have been a bear on the US Dollar since middle of January 2012 (Articles: Dollar Rally Ending – Part I & Part II). Since middle of January I have argued for the bullish Euro case and have remained a Euro bull despite all the pessimism.

As we can see in the chart above, the Euro Dollar exchange rate (two most liquid currencies in the world) is now at a decision point, and regardless of what I think, the market will soon decide. In other words, either the Euro will break down or it will break up, so stay alert and follow this exchange rate in coming days and weeks, as it will hold strong clues as to where a lot of asset classes, including Precious Metals & PM Mining Stocks could move in coming months.
Price Is Oversold 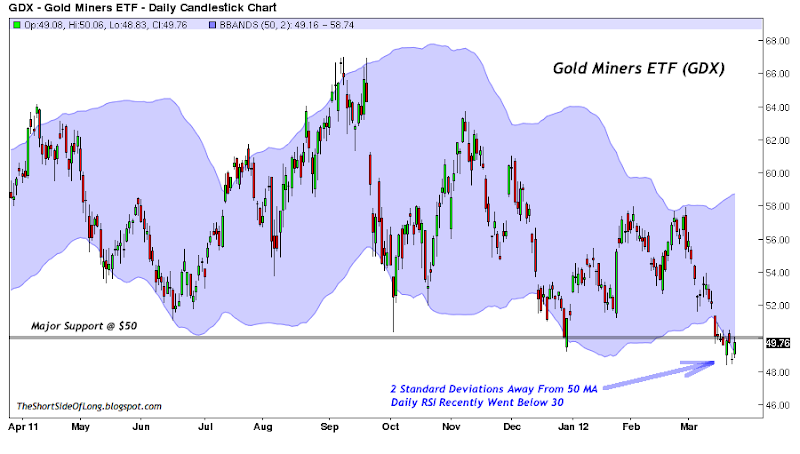 Gold Miners are now quite oversold. The chart above shows that the price of the ETF is currently trading 2 standard deviations away from 50 day moving average. At the same time, daily RSI level recently hit an oversold 30 reading. That in itself is obviously not enough to call a bottom, but from my experience, it never pays to sell anything when its 2SDs away from 50 MA. Also, keep in mind that while we are oversold, we could easily have a false breakdown here around a major $50 support, which ends up being a bear trap.
Breadth Is Oversold 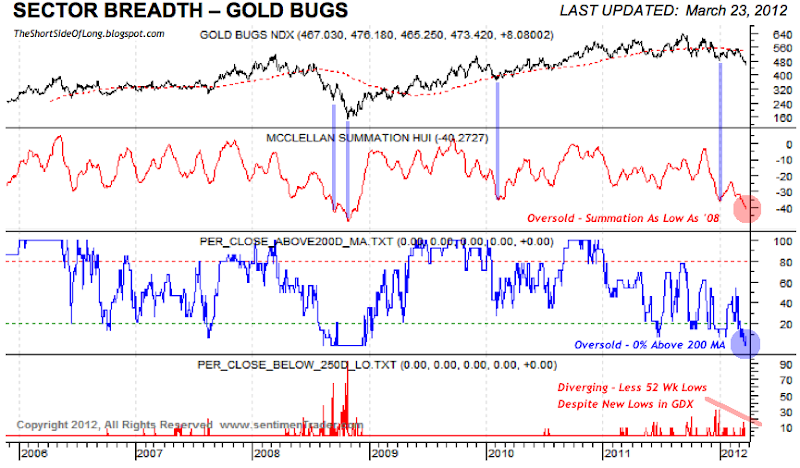 From the breadth point of view, Gold Miners are also oversold. As a matter of fact, they are as oversold as in 2008. First thing I would like to put forward is that GDX recently made a new closing low last week. Summation Index (smoothed longer term advancers minus decliners) is now as low as it was during 2008 levels. Second, the percentage of Gold Miners above 200 day MA is currently at 0%, which once again is the lowest since 2008. And finally, the percentage of 52 Week New Lows is bullishly diverging, while the GDX itself is making new lows.

On top of that, we also have a Bullish Percent Index breadth reading on Gold Miners show divergence that foretells of optimistic future. Despite a new low in price as of last week, there are now more and more Gold Mining components entering an uptrend. This is a bullish divergence, which signals that a bottom is either here or very near.
No Repeat Of 2008
One could than say…

Anything is possible and crashes do occur from oversold levels. Having said that, I’d argue against it for the following reasons: 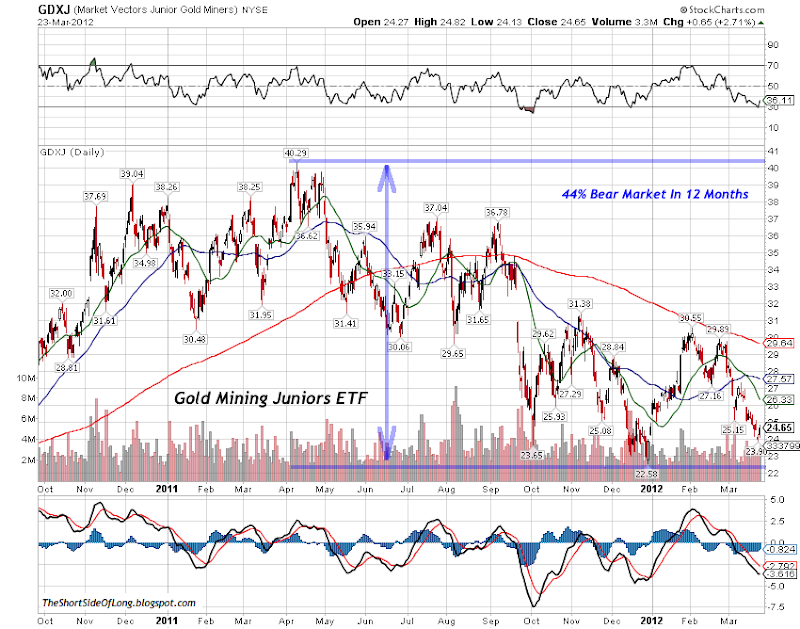 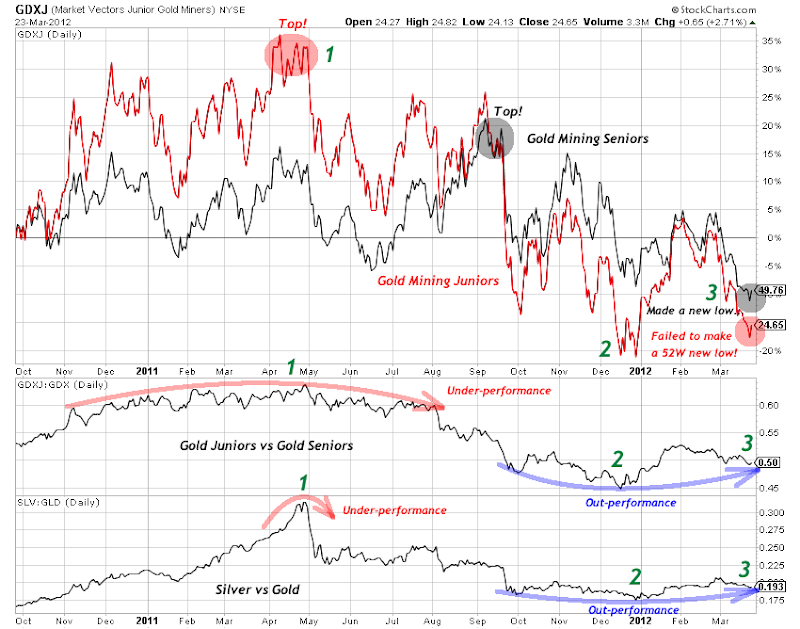 Money tends to flow into high beta sectors when the risk on inflationary trade is occurring, while it tends to flow into low beta defensive sectors when the risk off deflationary trade is occurring. I use the same concept between Junior and Senior Miners, as well as between Silver and Gold. Consider the chart above, which measures relative strength of Precious metals liquidity aka money flows, and note the following:
Sentiment Is Very Negative

The chart above shows two common indicators I tend to use to track Gold Miners sentiment. The first is the Rydex (dumb money) mutual fund flows into Gold Bugs Index (similar to GDX) and the second is the Put Call Ratio on the GDX ETF. Both show extreme bearishness and a potential for a bottom in coming days or weeks.
Summary
As you can see, there are a lot of indicators pointing to a Gold Miners bottom either around these levels or in coming days or weeks. Be it oversold price, oversold breadth, an already large cyclical bear market (Silver down 48%, Juniors down 44% from 2011 peaks), relative strength and bearish sentiment, which contrarian love to see – all of these point to buying into the PMs sector.
Having said all that, refer back to the beginning of the post. If the Euro breaks up, it will confirm what I have written here; but if the Euro breaks down (Dollar breaks up), than we could see some more selling first for a few more days or weeks, until the final bottom is reached. It is critical to keep your view on the Euro Dollar exchange rate in coming sessions to gage weather this is the right time to invest into the PMs sector or not. 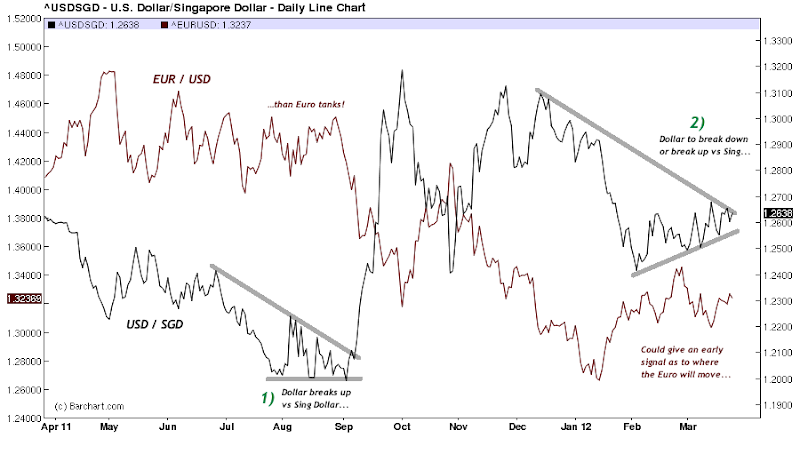 On a side note, the chart above shows how the Singapore Dollar vs US Dollar exchange rate tends to be a leading signal for where the Euro Dollar exchange rate could head next. This tends to be very useful when the Sing Dollar enters a tight triangle decision point, like back in August 2011 or right now. So if the Singapore Dollar breaks down, the Euro Dollar could follow lower too, and visa versa as well. Stay tuned as the market gets read to make a decision. Also consider the post I wrote on PMs only a week ago, where there is a risk for Gold’s bullish outcome if the Dollar keeps moving higher (Article: Commodities: Gold’s Risk Scenario).
Disclosure: I am short US Dollar since middle of January and long Silver since late last December. For more about what, where and when I invested into, check out the portfolio page in the tab above or just click here.