Unless you’ve been living under a rock then you have witnessed the now false breakout in Gold and gold stocks. Our expectation was that the breakout would take Gold to $1420 and the stocks up to their neckline resistance (GDX $30 and GDXJ $51) and then we’d see the first real correction since the December low. Before you send in the hate mail, as some already have, let me remind you that we’ve emphasized having an exit strategy and last week wrote, “You sit tight until you decide to take profits or something changes.” Something clearly changed this week. The breakout was nullified and precious metals will finish this week with a nasty candlestick that implies an interim top.

There are multiple reasons why recent price action will damage the recovery. First, both the metals and the stocks were unable to rally back to summer resistance. Second, false breakouts usually mark a key turning point. Recall that gold stocks had a false breakdown in December before rebounding for three months. This decline has also thrown the current recovery off course as compared to history. We will come back to this point later.

Although the two big markets (GDX and GDXJ) failed to reach their necklines, there are several parts of the sector that did reach their necklines. The chart below includes the S&P TSX Index, the BMO juniors ETF (ZJG.to), the explorers (GLDX), silver juniors (SILJ) and the Tocqueville Gold fund (TGLDX). The Canadian market has been aided by the weakening loonie though nevertheless a fair portion of the mining stock sector was able to rally back to resistance. The potential head and shoulder bottom patterns are well intact for Canadian miners, exploration companies, silver juniors and various mutual funds. 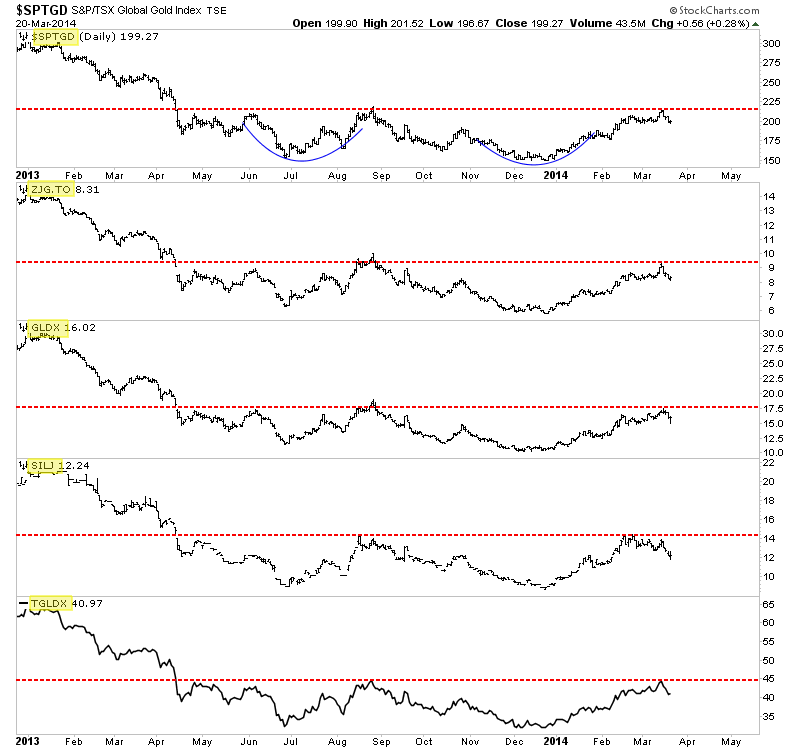 Meanwhile, GDX peaked at $28 and quickly declined below the recent consolidation lows. The next support is the open gap at $24. We anticipate strong support around $23. It marks the summer 2013 low (the left shoulder), the next low in October and the underside of the brief but bullish consolidation that began in late January. A decline to $23 would equate to a 17% correction which is below the 21% threshold for major corrections (mentioned in past articles). 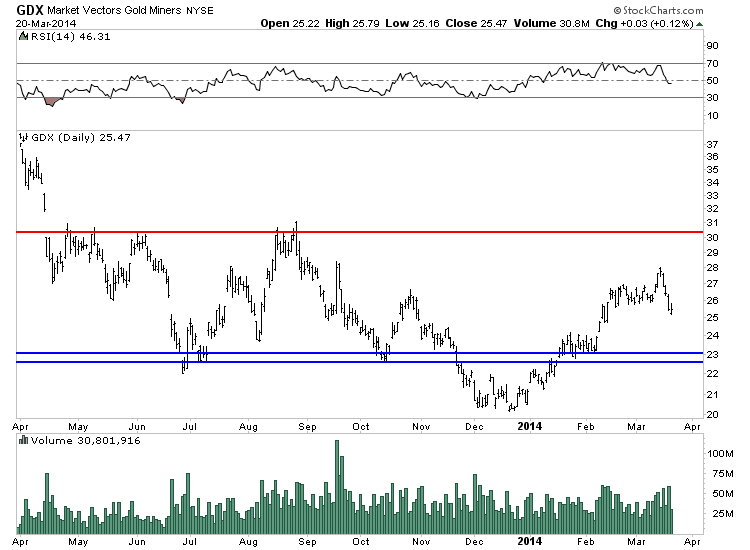 The large cap miners (GDX) have definitely veered off the recovery course set by the analog chart posted last week. The significance of that, in our opinion is not that the miners are headed to new lows. There is too much evidence that they bottomed. It’s far more likely that the off course movement indicates that no upside move is imminent or likely in the coming weeks and that the bottoming process (for the large caps) may not be complete.

Let’s remember that the analog is only one tool among many and that the gold stocks have only had a handful of major bottoms to study. Moreover, the 2011-2012 topping process in the gold stocks was unique in its length. The topping process began at the tail end of 2010 and the first breakdown didn’t begin until the first few months of 2012. Perhaps the implication of that unusual topping process is a forthcoming longer than normal bottoming process. It took GDX 15 months to begin its breakdown move (December 2010 to March 2012). Currently, the mining stocks as a whole are 11 months into their bottoming process.

To sum it up, a few things are clear. An interim top plus a strong low in place equates to range bound activity over the coming months. Second, the eventual push through neckline resistance is badly needed to kickstart the next bull market. Until then sentiment will remain muted and bears will continue to press their luck. The weaker stocks and indices could have a deeper correction while the stronger stocks and indices will correct the least and presumably form right shoulders. The next several months will offer traders and investors the opportunity to patiently accumulate the strongest and best stocks ahead of what will be, in earnest the start of a rip roaring bull market. If you’d be interested in learning about the companies poised to outperform the sector then we invite you to learn more about our service. Ski Gold Stocks: When is the next Major Buy Signal Coming?