Last week I penned an article titled, Gold Bear to End with a Bang. For those of you who prefer video, here is my analysis on video. I warn of the dangerous short-term downside potential in Gold that could mark the end to this bear market. Thus far, this analysis has been on track and has served to protect subscriber portfolios in recent days and weeks.

Sadly, this analysis did not sit too well with “Ranting” Andy Hoffman, marketing man and manipulation guru extraordinaire at precious metals dealer Miles Franklin. Rather than critique my analysis, he resorted to personal attacks in a lengthy rant. When someone attacks you personally, it’s probably because you are right. Moreover, he didn’t even read the entire article because he made numerous errors in reference to its content. Before I get to the larger point, let me correct some of his errors.

First of all, he assumes I’m implying that the gold stocks would not decline given a decline in the price of Gold. This is totally absurd. I noted: There is very strong support sitting right below the summer lows. Here is that same chart which shows the downside potential to that major support. 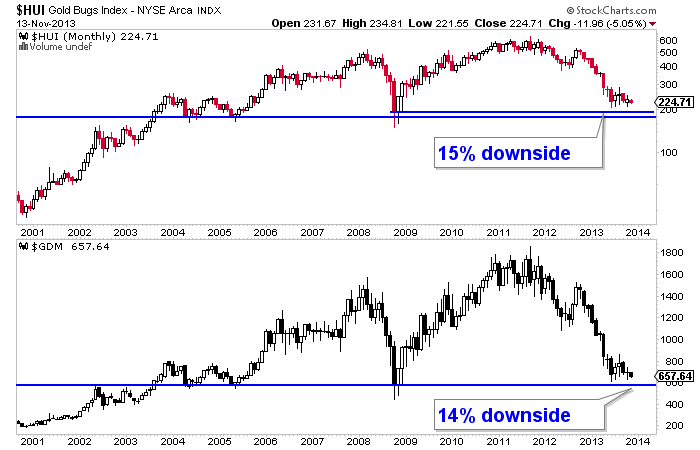 Secondly, he posted only one chart from my article while neglecting not only the other two important charts that show the pattern but also my conclusion. He compares my A-B-C labeling to the Aden Sisters’ pattern of which there is no relation whatsoever.

Third, he mocks the 1976 comparison which is quite foolish in my opinion. In a previous article I noted the several comparisons between today in 1976.

Instead of carefully reading the entire article and considering my analysis, he resorted to attacking me personally and professionally. He tried to denigrate me professionally by mocking my Chartered Market Technician designation and calling me a “two-bit” technician. If that were the case then how did I anticipate the June bottom and big rebound here and here or the top in commodities in 2011 and the big decline in Silver in 2011? Surely I’ve made some bad calls but the reality is technical analysis works fine. It fails when the analyst has the wrong interpretation. And by the way, I’m one of only a few legitimately credentialed technical analysts in the gold community.

Furthermore, Hoffman claims that I don’t have my readers interests at heart and am leading them to slaughter. Are you serious? Its disgusting and disingenuous to claim that I don’t have my readers interest at heart. I’m alerting them about the potential for a serious decline. This guy was jamming Silver down people’s throats above $40/oz and he has the gall to call out someone else for making an honest prediction?

Hoffman goes on to mock newsletter writers as a group which I find ironic considering the only references Miles Franklin has (as to its credibility as a dealer) are newsletter writers! Also, according to its website, part of Miles Franklin’s philosophy is integrity. Yet, to attack someone personally and their professional credentials for no sound reason shows that its front man does not represent the company’s philosophy.

Honestly, it’s not surprising. Hoffman and the gold bug conspiracy loving charlatans have made a complete mockery of precious metals and the gold community. As the bear market has persisted these folks have shown no humility and become more fanatical in their already outlandish and ridiculous views.

The bigger the decline, the greater the manipulation they say while raising their already extreme future price targets. The more US equities outperform, the more grandiose the headlines become about the world ending and markets collapsing. Gold goes up, they are right. Gold goes down, they weren’t wrong. It was manipulation. How convenient for these guys. They never lose!

What is hilarious is this group has a double standard with technical analysis. Anytime I post an article with a really bullish chart pattern, the conspiracy brigade will quickly utilize it to its advantage. If my opinion is to the contrary, then they trot out the manipulated market line like a trained monkey.

Not once publicly or to subscribers have I ever blamed manipulation for my own mistakes and failures. It is a loser attitude and prevents growth as a trader or investor. Learning from mistakes is what makes you better in anything.

It’s absolutely pathetic how much Hoffman and his ilk use this excuse to cover up their failed forecasts and pumping of the metals at much higher prices. This whining about manipulation never made anyone one single cent. Do you ever hear money managers or fund managers blame their problems on manipulation? Does anyone actually believe a cartel is naked shorting mining stocks? “Honey I have to get to work early today, we really need to knock down the mining stocks.”

I stick by my forecast and am confident in its outcome. This sector is headed for trouble in the near term but it is likely to be the end of the bear market. There will be a huge and fantastic rebound. When I provide charts showing how much the metals and stocks can rebound, Hoffman and others are free to use them to promote their views. In the meantime, do yourself a favor and tune out the nonsense and anyone who isn’t going to help you make money. I’d be honored if you wanted to learn more about my premium service in which we focus on the gold and silver stocks which will outperform dramatically.