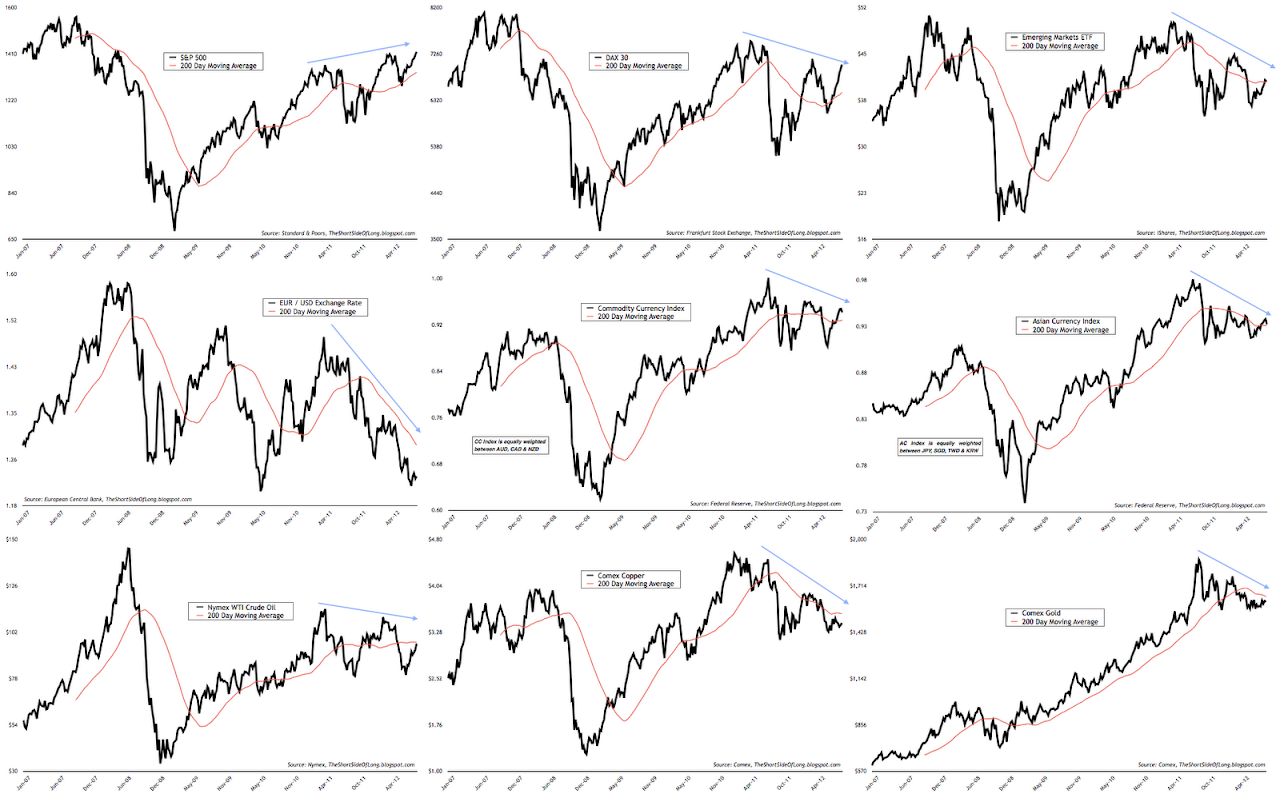 We continue to see that industrial economic barometers like Copper and Crude Oil are failing to confirm the S&P 500’s new closing high this week. Emerging Markets, the saviour of global growth in the post Lehman recovery also continue to lag other equity indices indicating that not all is well with the BRICs. Furthermore, the short term rise in the DAX 30, Commodity Currencies and Brent Crude (not shown here) has been almost vertical and most likely overdue for at least a pullback.
Leading Indicators
This weeks economic update is not necessary due to the feature article.
Featured Article
This week I received another monthly issue of the highly respected Merrill Lynch Fund Managers Survey. What struck me the most out of the whole survey was the fact that global fund managers think we are now entering the point of a late cycle within the current growth expansion (chart below). I think this is one of the most important charts for those that practice long term investing, because it lets one know that investments in stocks made during the last recession (between late 2008 and early 2009), could come under heavy pressure in the up-and-coming downturn. 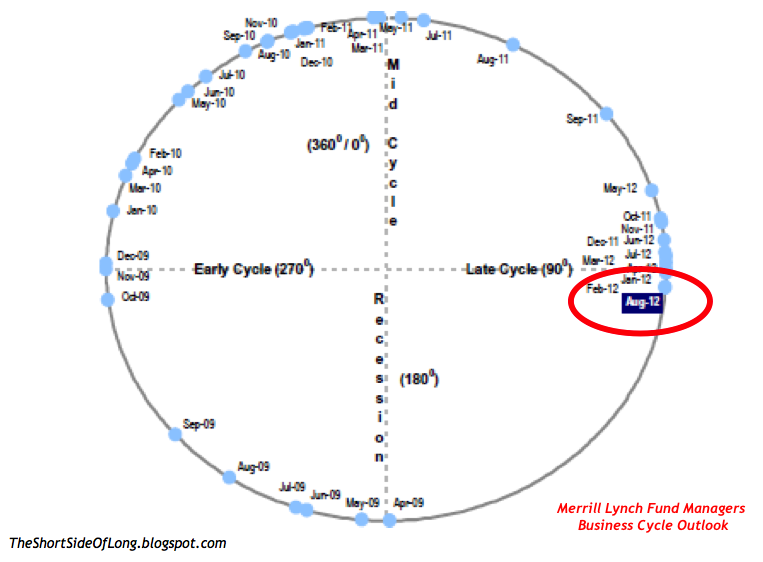 The survey stated that global managers think we are more than 75% in completion of a full business cycle. By full cycle I mean from from the previous recession trough in 2009 to the up-and-coming recession trough. That basically means we have gone from an end of a recession (June 2009) to “green shoots” (November 2009), to a recovery (February 2010), to the early cycle pause (summer of 2010), to Emerging Market overheating (November 2010) and commodity inflation pressures (May 2011), into mid cycle slowdown scare (summer of 2011) and finally, today we find ourselves in the late cycle (August 2012). 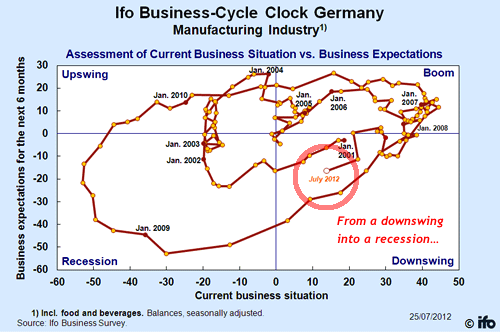 This is not the only survey confirming this outlook. The highly respected Ifo Business Confidence survey, which tracks the opinions of 3000 CEOs – most of which come from manufacturing powerhouse companies – also shows a similar outlook. The fact of the matter is that the majority of German CEOs think we are currently in the downswing of a business cycle, with a recession approaching.

Away from the Merrill Lynch survey, this weekend I also had the pleasure of conversing face to face or through email and telephone with quite a few global investors, newsletter writers and Australian miners.From what I sensed, while miners were scared of further slowdown, majority of investors (who sit in their offices behind computers all day) thought that things in Europe were just about as bad as they could get. They kept quoting how everyone was very negative on Europe and that from a “contrarian” point of view (their words), the worst is most likely over.

I had to remind these gentlemen that Europe was barely entering a recession and Germany in particular was still growing. I outlined that we are now most likely entering the real part of a downturn, where growth goes from stall speed to… no speed. As we can see in the chart above, this is quite a similar occurrence to the middle of 2008. 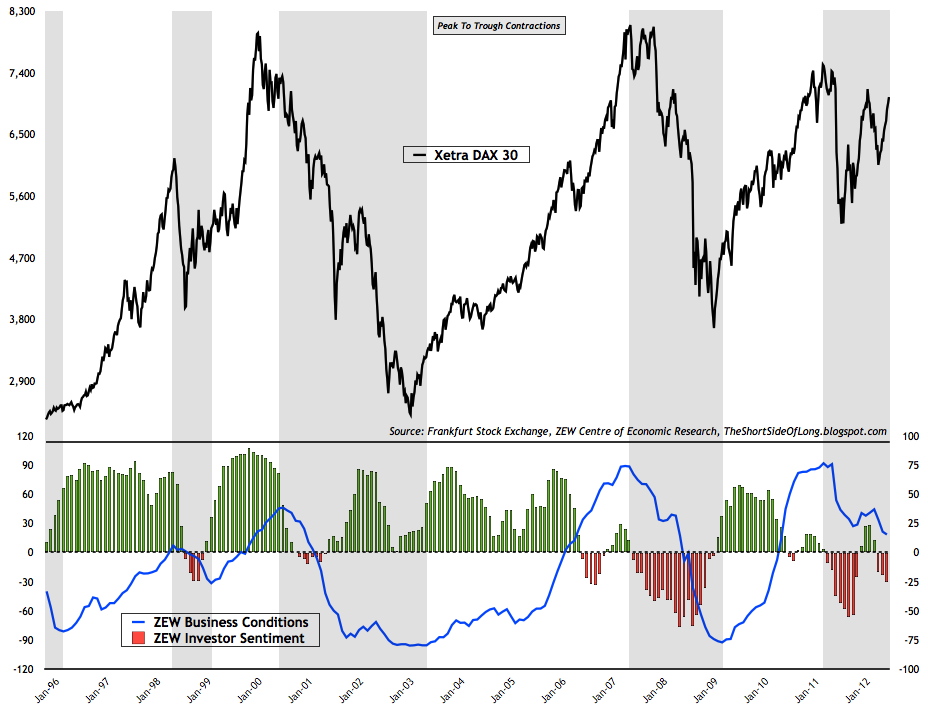 I also tried to explain to my investor / trader acquaintances that private sector business conditions in major European countries were no where near depressed or bottoming. Merely, they were only starting their contraction as outlined by the ZEW Business Conditions in the chart above. While we are down to two and half year lows, we are still in the positive readings.

Than the conversation turned to China (as it always does). The Red Dragon is the mystery beast that no one has figured out yet. What is the real growth rate? Will the property bubble burst? Will we see a soft or a hard landing? Is it a cyclical or structural problem? And the questions went on and on. 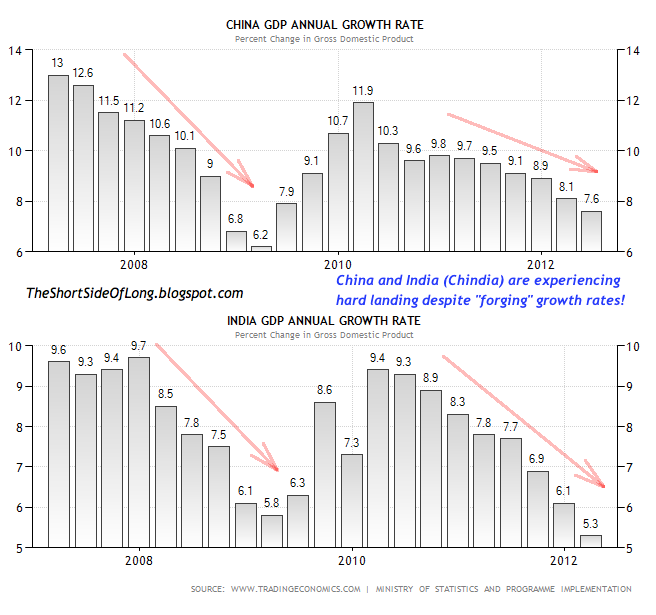 My view is that not only China, but also India, is headed for a very hard landing. First of all, while I haven’t been in business investment for too long (as I am still very young on a relative basis to many professionals), I have to admit that from studying history, I have never seen or heard of any economy “landing softly” from large over-capacities. This is just a myth and I think we will see it again with Chin-dia.

First of all, if major Asian economies are growing anywhere near 5% to 7% like we can see in charts above, I find it astonishing that companies like McDonalds are experiencing falling sales in Asia. Analysts recently reported that:

Please understand that unlike in US and Europe, Asia is still not saturated with McDonalds restaurants and this has been the strongest region when it came to growth rates over the last few years. So, it is my opinion that I would rather trust McDonald’s revenue report, where sales in Asia are barely growing, than the official government GDP figures. 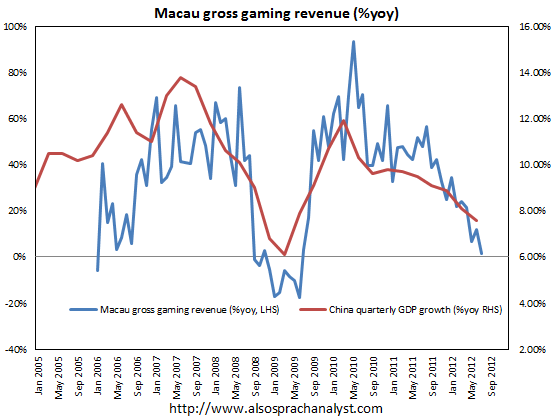 I also find it interesting that the Macau gaming revenues have totally collapsed in recent months, and if this is any indication of where the GDP figures might be in coming quarters, than a hard landing is much more likely than a recovery that many analysts are still predicting. 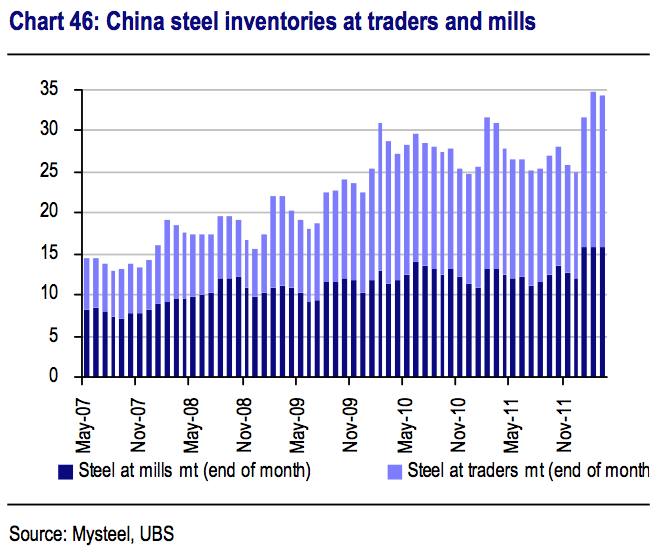 Many China bulls claim that Growth is really coming from the construction side of things, however month after month all I see is an increasing trend in steel inventories, falling Chinese steel prices, falling Australian coking coal and iron ore prices (necessary to produce steel) and falling global cement prices (down 40% to 50% from their recent peak). Copper continues to act very weak, not confirming the S&P 500 rally, despite further stimulus talk from the ECB and the Fed.

Then we move onto United States. Let be honest, with the rest of the world “looking bad”, the conversation usually turns towards “de-coupling” themes, where investors state that the US is the cleanest dirty shirt, best house in a bad neighbourhood or the tallest midget in a circus. 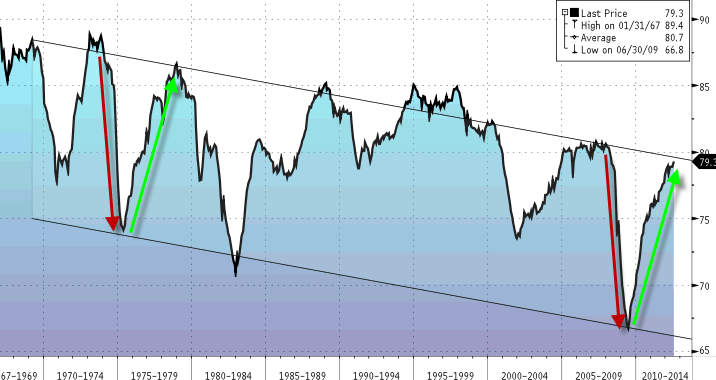 Personally for me, the US economy and its stock market remain in a secular bear market. That means, any recoveries, no matter how powerful in the cyclical term will eventually disappoint again. As we can see in the chart above, Capacity Utilisation – a lagging economic indicator, shows that the cyclical recovery post the 2008 recession is very similar to the recovery post the 1974 recession, both occurring in the context of a secular bear market. In the coming months and quarters I expect the economy to start to disappoint. 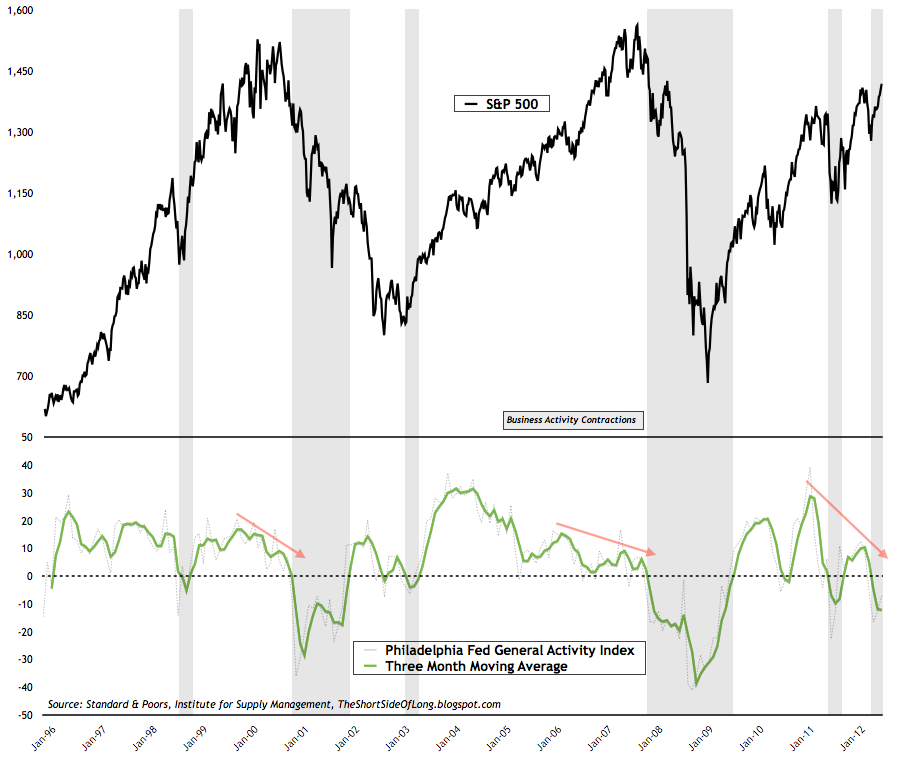 The more important leading indictors, like the Philly Fed Index which once again contracted this month for the fourth time in a row (not seen since 2008), is signalling very very weak growth and most likely the beginning of a recession. The bulls are somehow managing to put a positive spin on the data, just because their minds are clouded by couple of % points rally in the equity market, but the fact is that the three month moving average is seriously contracting. 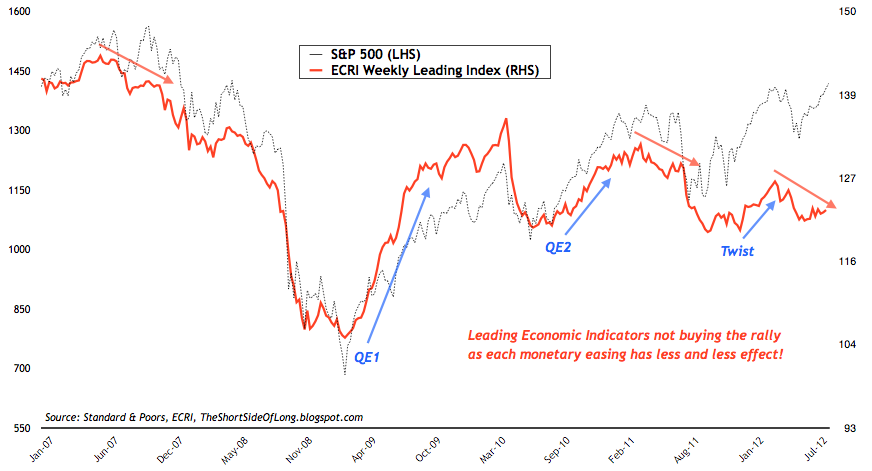 The ECRI Weekly Leading Index is also not buying into the recent equity market rally either. First of all, the divergences between future economic activity represented by the ECRI LEI and stocks represented by Wall Street bidding up stocks in “hope” of stimulus is enormous, as we can see in the chart above. Therefore, either the stock market is right and the economy will miraculously jump start into “turbo speed” or the stock market is wrong and gravity is waiting around the corner.

Second of all, it is plainly obvious that each central bank policy stimulus program from late 2008 onwards is having less and less of an effect. In his recent interview with Tom Keene on Bloomberg, Gary Shilling summarised quantitative easing perfectly:

“Each time unsuccesful policies are tried, they are less effective as investors, consumers and businesses recall previous experinces. The effects of quantative easing have only been temporary.” ~ Gary Shilling

I couldn’t agree more and neither could the ECRI chart above. Printing money cannot prevent another recession or downturn. Sometimes it can only post pone it in the shorter term, however we have been postponing a downturn for two summers in a row now and if we manage to postpone it yet again, not even a ten year old kid will believe the growth rates, as we all know economic activity is being “edited” until the US elections pass. 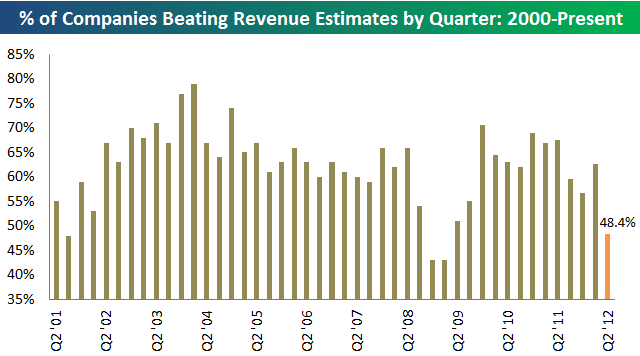 And finally, let us discuss the invincible US corporate profits, which seem to just go up quarter after quarter. It is interesting to see how the bulls are reacting these days, as they notice a dramatic disappointment in revenues (top line sales) just like the bears do too, but they dismiss it to the side claiming that earnings (bottom line profits) are still doing well. Anyone who has a common Economics 101 understanding knows that revenues falling indicate that it is only a matter of time until earnings also start falling. 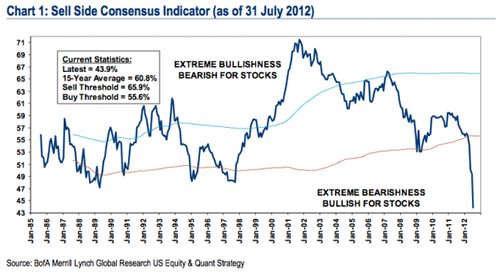 Well, bulls claims that since “everyone is bearish” stocks will surprise on the upside regardless of revenues. I’ve heard S&P 500 targets towards 1600s and unto 2000s. In my opinion this is totally ludicrous. The main reason comes from a variety of thinking processes, but specifically the ever so popular chart above is usually a bulls best weapon in convincing other bulls that they are on the right side of the trade. I am pretty sure that you have most likely seen that chart on just about every finance blog out there. What a load of you know what… 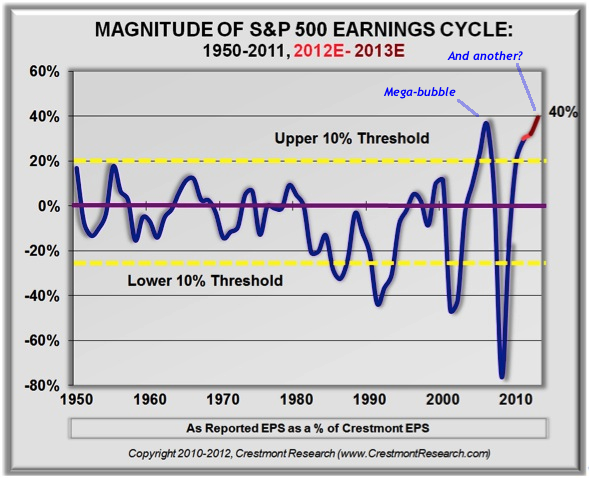 If you really what to know what analysts think, then focus on their earnings expectations. After all, the stock market is valued by its price relative to its earnings. As we can see in the chart above, despite huge signs of a global economic slowdown, analysts are in bullish la-la-land extrapolating ridiculous earnings growth above trend well into early 2014. 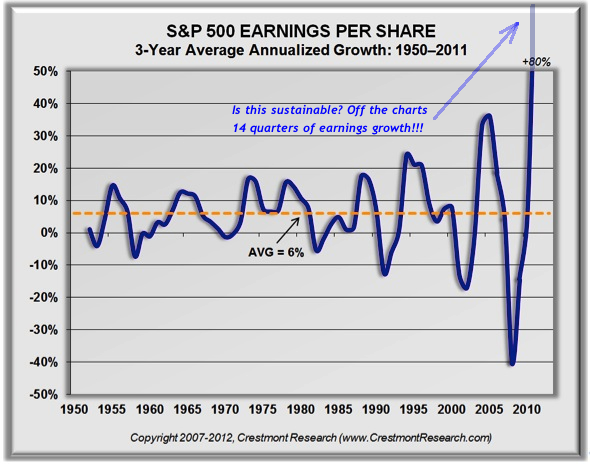 And if you do not believe that we are in a ridiculously bullish la-la land, than the chat above (with its readings off the chart… literally) should do a good job proving the unsustainable growth US companies have been achieving for 14 straight quarters now. Since profit margins and earnings tend to mean revert throughout history, the up-and-coming downturn is going to hurt a lot. So what could create an environment where earnings disappoint? I have three main points where earnings could disappoint into 2013 and they are: 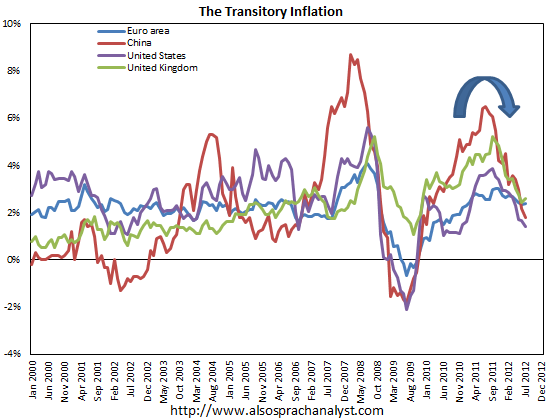 I am not going to enter into a debate between perma-deflationsts, who have been wrong in picking recessions during the last two slowdowns in the summer of 2010 and 2011; nor perma-inflationsists, who in my opinion are about to be wrong post the US elections, in picking a huge melt up into 2013/14. All I will say is that we are currently in a period of disinflation or deflation. What does that mean? Basically, Economics 101 states that we are now in a period where supply exceeds demand. I will repeat that again… supply exceeds demand. That means prices do not rise, but more likely fall. As we approach deflation on the CPI figures (negative readings similar to 2008), we will see central bankers ready to act with large “money printing” programs in trillions of Dollars / Euros / Yen / Pounds. In the mean time, we will hear a lot of “talk” from central bankers, but we will not see a lot of “walk”.

Trading Diary
What I Am Watching