Boredom is starting to slowly reappear in the gold market as multiple attempts to penetrate $1250 on the upside were thwarted. Investor sentiment was bound to come back down to earth, and this correction is doing just that. With precious metals stocks down 10% from their recent peak, latecomers to the party are starting to get nervous. This is great news for long-term investors.
I would ideally like to see gold test $1180-$1200 on the downside before exploding to new highs. This would constitute a very bullish stance for the yellow metal. A test of $1180-$1200 and subsequent bounce would suggest to me that we will see $1400 in the next few months. To those of you who believe in the gold story, do not lose your position. We’ve all been here before: be patient and buy the dips. 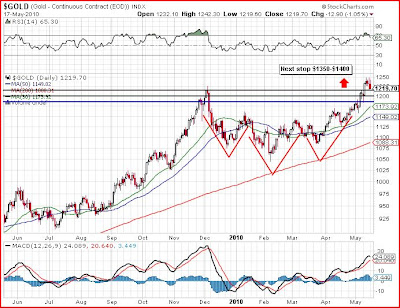 Gold is now trading as a currency, not a commodity. There are two indicators that reflect this sentiment change in gold: the coincident rise of the dollar and gold; and the rising gold to oil ratio.
Gold and oil traded in lockstep for the better part of the last year before problems in the EU appeared. Once it became apparent to investors that the term “shock and awe” only described the level of fiscal mismanagemt in the EU, gold started to receive massive capital flows. The gold:oil ratio has been gapping in response. 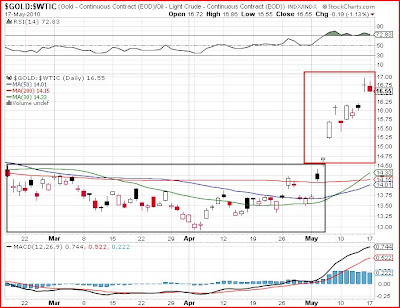 Curious is the massive decline in crude oil given the huge Gulf region oil spill. I believe crude oil is signaling weakness in global economic growth moving forward. Rest assured that you won’t be hearing nonsense about rising oil prices evidencing a global V-shaped recovery anymore. Oil is a pure anti-dollar play for the time being.
The drop in oil prices means gold miners are going to bank some serious coin. Ignore fear-driven sell-offs in gold stocks and start building your position. The fundamentals for gold miners are getting stronger. Trust that the fundamentals will assert themselves in the long run.
My strategy for riding this bull market remains the same. I buy every single panic sell-off, then I go outside and whistle on the street. The last thing I do is stare at my computer screen. You may think I am saying this tongue in cheek, but I am being 100% serious.
A lot of investors are so focused on minor, inconsequential details (like nominal prices) that they are missing out on the big picture. In a genuine effort to help people “see the light”, I will write a post soon to address all the misguided “gold bubble” arguments.
This post comes from the authors blog: http://www.expectedreturnsblog.com/
Previous

Deflation and Economic Weakness Are the Best Catalysts for Gold