In the wake of the Fed’s announcement of open-ended or as I like to call it, permanent quantitative (QE) easing, mainstream advisors and pundits have found another way to promote stocks. Recently I heard one popular media pundit say based on QE buy stocks but not gold stocks. Also, pundits are instructing followers to buy Apple based on QE. What nonsense. This stuff practically writes itself. Next, when inflation takes hold we’ll hear about how stocks are an inflation hedge. The reality is the cyclical bull market in equities is approaching its end and will give way to the bull market in Gold and gold stocks which is set to move into the recognition phase.

A simple way to compare Gold and stocks is to use ratio charts. Below we graph Gold against various markets which includes the S&P 500, the Nasdaq and emerging markets. During the financial crisis Gold surged against equities. As the intensity of the crisis peaked, so did Gold in real terms. It peaked again during the initial European crisis. Nonetheless, note that these ratios have maintained their uptrends throughout the cyclical bull in stocks. Over the twelve months, we expect these ratios to retest their highs. In other words, look for Gold to outperform equities. 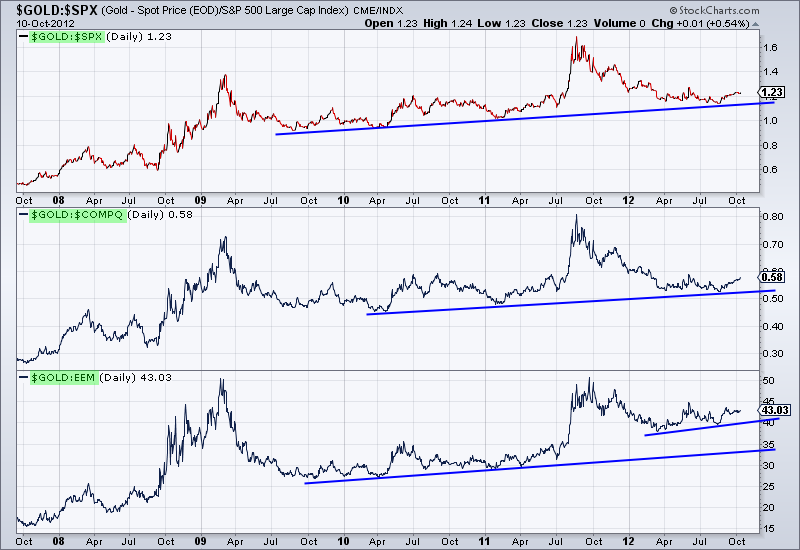 The performance of the gold stocks, being a hyper-volatile sector has been more erratic and less consistent than Gold. However, the gold shares as depicted below by the HUI gold bugs index have maintained their uptrend against the S&P 500. It does not take a professional to see that this chart is a buy, which means buy gold stocks and sell the stock market. 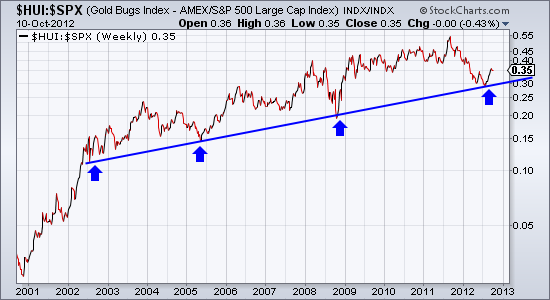 While the focus of this missive is stocks we want to include an observation on bonds. Recently we wrote about the importance of a potential breakout in the Gold/Bonds ratio. The skeptics on precious metals will argue that if stocks fall then bonds will rise thereby hurting precious metals. However, the chart below argues that bonds may have already priced in a recession. The 30-year price typically bottoms prior to recessions and then gains during a recession. Over the past 18 months the 30-year bond price has gained substantially. Sure, it could rise further but the bond market is already quite heavy and that lessens the risk for precious metals. 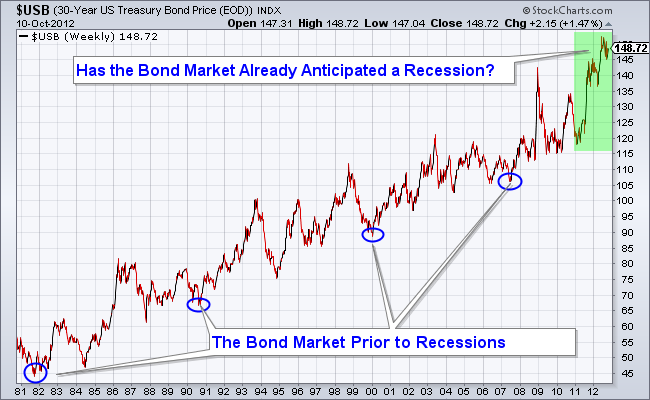 Gold is nearly a full 13 years into its bull market while the gold stocks are close to a full 12 years into the bull market. The public participation and bubble phase in a bull market develops as the bull market begins to outperform all asset classes. Over the long-term, Gold has crushed and stocks and bonds. Yet, those conventional assets have performed quite well in the last 18 months. Over the coming months, Gold is likely to challenge its all-time highs while equities continue a topping process. Furthermore, as Gold breaks out to new highs and inflationary fears emerge, capital will move out of fixed income and into Gold and gold shares.

Readers are well aware that in the summer we forecasted the rebound in precious metals and resistance targets of $1800 for Gold, $57 for GDX and $35 for Silver. Over the coming weeks look for precious metals to continue to correct and consolidate. This current correction could be the final chance to accumulate the metals and the shares before they advance to test the all time highs.  If you’d be interested in professional guidance in uncovering the producers and explorers poised for big gains then we invite you to learn more about our service.