Back in August we wrote a piece titled: The Catalyst for Consolidation in the Gold Sector. We noticed that the large cap producers had begun to outperform the rest of the sector which consists of small producers, developers and explorers. Risk aversion, the Euro debt crisis and a struggling stock market has contributed to the continued underperformance of the riskier plays in a risky sector. The chart below shows GDX (large producers), GDXJ (developers, explorers) and the ratio between the two. 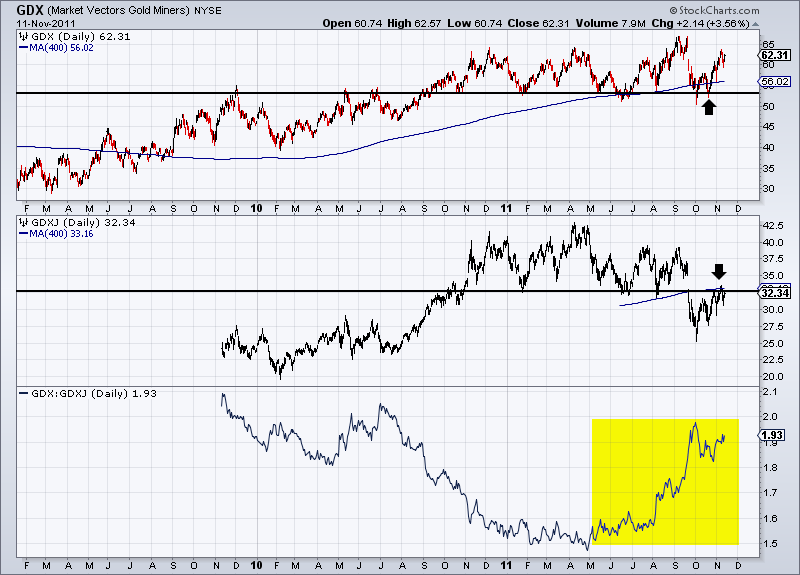 As you can see, GDX was able to maintain its support while GDXJ broke support and made a new 52-week low. As a result, the ratio surged in favor of GDX.

Traders and investors need to remember that gold stocks are a risky bunch and that the non-producers are extremely risky. Yes, the sector is in a bull market but that by itself is not enough to drive the speculative plays higher. Until we reach the bubble phase, the non producers will rise on their own merits and not because “it’s a bull market.” Though we are likely at least two to three years from the birth of a bubble, does it mean the non-producers will continue to underperform in the meantime?

Hardly. Remember, the large caps (GDX) have been in a consolidation for a year and that has a negative effect on the speculative plays. The longer a consolidation lasts, the more weak hands jump ship. At the start of the consolidation, the non-producers held up better. Ultimately they are going to underperform in a weak market and outperform in a strong market. The good news is the large caps are close to a major breakout which is not only a catalyst for the large stocks but a catalyst for everything else in the sector. 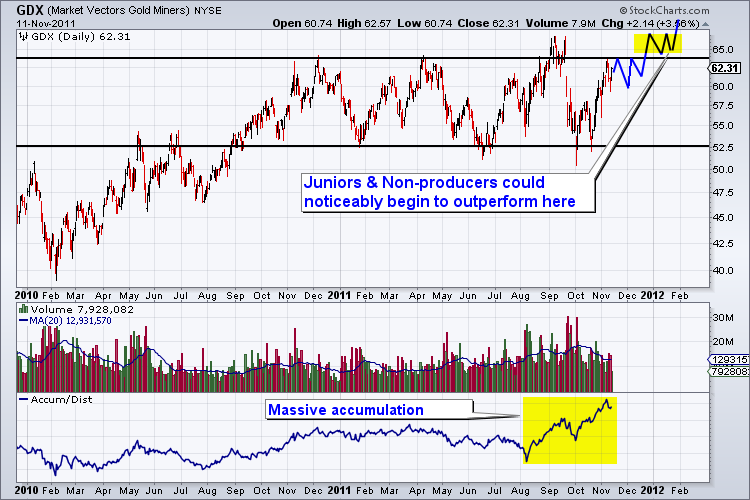 A breakout in GDX, as we presume in the above chart, would certainly have a positive impact on junior developers and junior exploration plays which have underperformed badly in the last few months. After all, this is happened before. GDXJ performed better in Q3 and Q4 of 2010 when GDX broke out of an eight month consolidation. GDX also made a huge breakout in the second half of 2005 and junior stocks surged over the next 18 months.

This time, GDX is close to a very significant breakout as it could pull away from a one-year base as well as the 2008 highs and on some charts, the 1980 highs. Although the non-producers have lagged, they would ultimately find a huge bid in the immediate aftermath of a breakout in GDX. Traders and investors need to know when to play it safe and when to take risks. Heading into this potential breakout, it is wise to stick with producers who are finding a bid. However, when the breakout appears imminent, it would be wise to set your sights a bit lower on the food chain and find the developers and explorers ready for a major rise. If you’d like professional guidance in navigating this bull market and finding the best performing stocks, then we invite you to learn more about our service.

Bloomberg: Gold Traders most Bullish Since 2004