I believe we have recently added a much-needed element that will lead to much higher gold prices- boredom. General gold sentiment amidst near-record prices

is muted and reminiscent of sentiment last fall when we broke out to new highs, backtested the breakout, then rocket launched for 3 straight months. It was the type of move that was met with widespread suspicion as even gold bugs were calling for a return to $800-$900 gold. 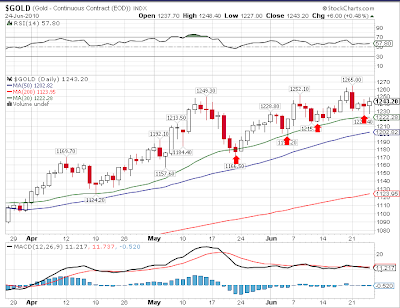 Gold charts are showing that there is some major accumulation taking place. Pullbacks are shallow and exhibiting diminishing strength. Gold has regained the failed breakout level of $1250 in short order. This is a market signalling major strength.
The late summer to fall months have given us monster gold rallies each of the past 3 years. The price action in gold suggests this pattern will play out again this year. As we move to new highs, the hardest thing to do will be to sit tight and hold for the major gains. These major cyclical moves tend to put your emotions to the test. 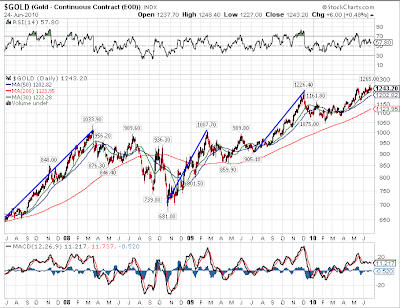 Precious metals and bonds are pretty much the only places people want to be. Silver will be a major beneficiary of this developing trend. Silver peaked in 2008 and has since lagged gold. However, the fundamentals are starting to come together for silver. The recent depegging of the yuan from the dollar is bullish for silver since China has historically been silver-friendly. As investors increasingly seek safe haven plays, capital will “trickle down” to silver since gold will be perceived as expensive.
$19.81 is the next level to keep an eye on. A test of silver’s highs from this bull market should be coming soon. 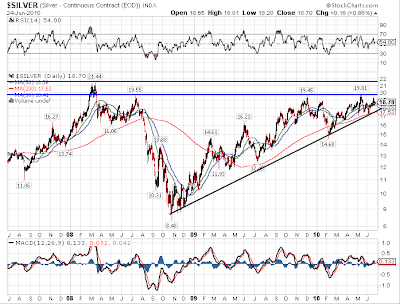 I continue to be firm in my belief that the next leg up in gold will be historic. So many variables for higher gold prices

are converging. Confidence is starting to shift and economic surprises will now be to the downside. Most of the potential “black swan” events I can think of are gold positive: currency crises, war, banking crises, debt defaults etc.
Those with the patience to sit on their hands while gold rises to record highs will reap the greatest rewards from this bull market. The major money is made by sitting and watching, not trading and panicing. When all is said and done, the upcoming explosion in gold prices will be perceived as a gamechanger. While I am not adding to my positions right now, current prices will be seen as “cheap” in 6 months. Stay focused on the endgame- what we have all been waiting for is soon approaching.
Source: http://www.expectedreturnsblog.com/
Previous

Too Many Advertisements for Gold?