In our most recent commentary we wrote about the relative strength in the gold equities. Gold equities have not only bucked the downtrend in the equity markets but in relative terms are breaking to new highs against equity indices. In the chart below we plot precious metals prices, GDX versus the Morgan Stanley World Index and GDX versus the S&P 500. We highlight how each performed during bear markets. Other than in the crash in 2008, precious metals and the equities have performed quite well during times of struggle for conventional stocks. 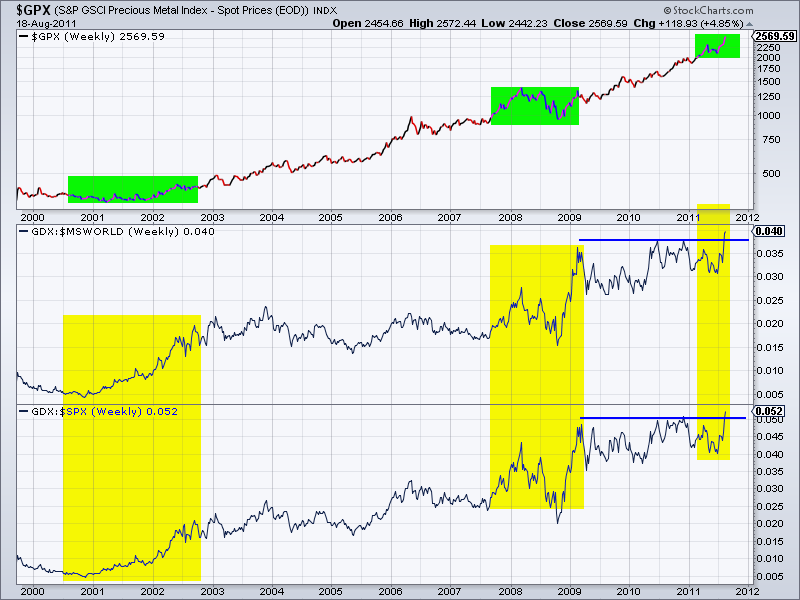 For a historical perspective on the gold stocks relative to the stock market, one should consider this chart from Nick Laird of Sharelynx.com. This picture shows the ratio of the Barrons Gold Mining index versus the S&P 500. Although a year old, the current ratio is fairly close to where it was in 2010.

Precious metals and the related equities cannot have a strong bull market lasting several years if conventional stocks are rising. If conventional investments are rising then the mainstream and retail investor won’t put one cent into Gold. After all, if conventional assets are healthy then why do you need Gold? Gold flourishes in an environment where stocks and bonds are questioned. The gold stocks do best in such an environment, provided the equity market is not crashing.

We have already had two 50% declines in the last ten years. We are following the typical pattern of a secular bear market. The pattern calls for a cyclical bear market over the next few years. The private sector has already had to deal with two recessions in ten years. It is prepared for this environment. This cyclical bear will be a government-led recession in which high inflation and rising interest rates hurt growth. Meanwhile, households are still in a delevarging process that will last another five years at least. It is a muddle through environment.

For gold stock investors, this is nothing to fear. This is exactly the environment we need for gold and silver stocks to flourish. Their relative strength amid the equity carnage is a positive omen. They are starting to act as called for by the aforementioned history. However, we do understand why some investors are concerned. Equities are selling off and with 2008 in the rear-view mirror this can be even scary for Gold. If you’d like professional guidance in riding this bull market and managing the ups and downs then we invite you to learn more about our service.