Gold and silver stocks are not only the most volatile sector but the highest beta sector. Therefore the percentage moves can be quite exaggerated relative to the market. Currently, the shares have emerged from a W bottoming pattern. They have gained substantially (in percentage terms) in just the past month. I wanted to consult history and in particular the rebounds following the bottoms in 2000, 2005 and 2008 to get a sense of the reasonable upside potential over the coming months. Judging from history, one should not be alarmed about the recent gains because these rebounds tend to run much longer and higher.

Below we chart the HUI in weekly form dating back to 2000. We also plot the HUI’s rate of change for 18 weeks and 26 weeks (equivalent to four and six months) and we note the length of time it took the HUI to break to a new high following the start of the cyclical bears. The market typically rebounds 50%-70% four months following a bottom and roughly 75% six months after a bottom. 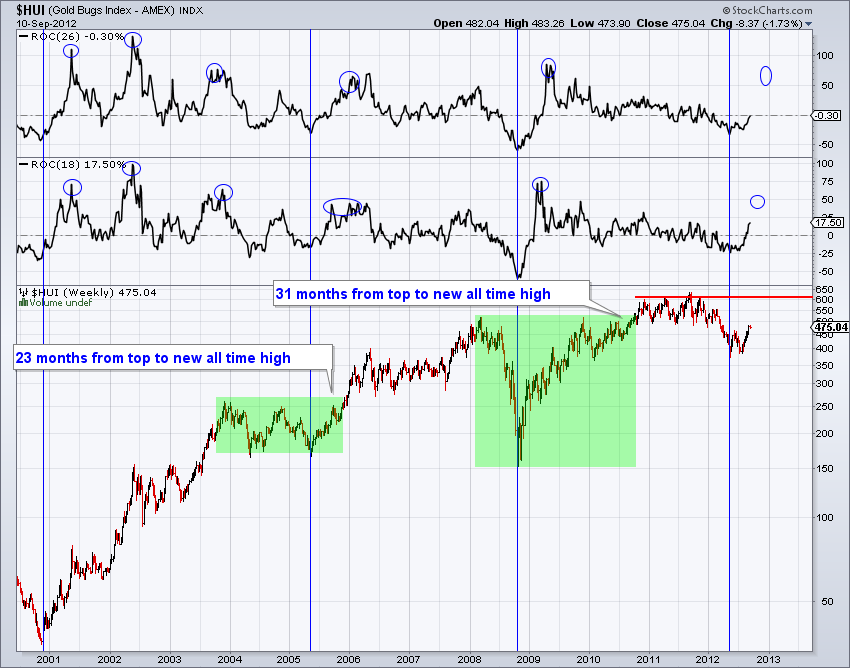 If the HUI rebounds 50% from the May 2012 low then we are looking at a target of 558 by or in October. That target is essentially on par with the Q1 2012 high of 555. Secondly, a six month rebound of 65% would take the HUI to 615 (exactly the level of the red line) by or in December. Even if these targets are hit a month or two later, we still would experience a bullish outcome. Keep these targets in mind as we move to short-term analysis.

Next we chart GDX, GDXJ and SIL. In recent days these markets achieved significant breakouts on ‘gap up’ moves. Monday’s action is a strong signal that these markets could fill their open gaps (see circles) and then retest previous resistance which is now support. GDX is very comparable to the HUI. The initial rebound target for the HUI (558) is equivalent to GDX $57. Furthermore, $57 is the 62% retracement (from the 2011 high to 2012 low) and the target from the length of the W bottoming pattern ($48-$39 = $9, $9+$48=$57). 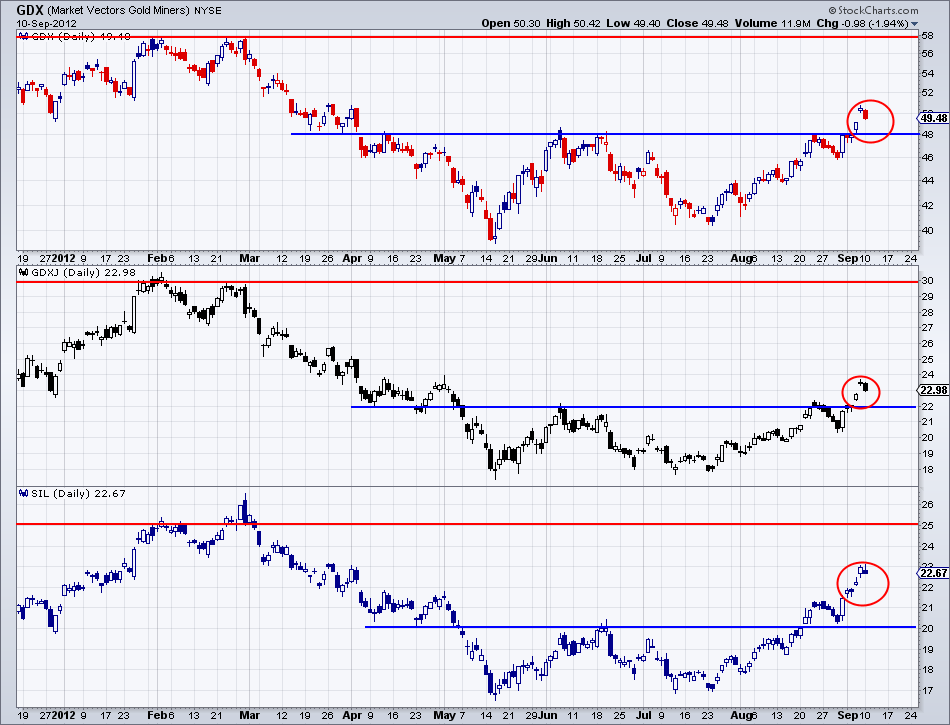 While gold and silver equities have had a strong run, they have only broken out from their multi-month bottoming patterns. A retreat and fill of the gaps would alleviate the current overbought condition, temper sentiment a bit and facilitate another strong leg higher. Moreover, judging from history, this rebound still carries substantial upside potential in the coming months. Traders and investors should look to take advantage if the miners fill their gaps and retest the breakout. If you’d be interested in professional guidance in uncovering the producers and explorers poised to outperform then we invite you to learn more about our service.