Sell in May and don’t go away. Sell and buy gold stocks.

We all know gold stocks have been a disaster for weeks and months. The HUI gold bugs index kept falling below support levels until finding support near 260 which we consider to be very strong support and probably the major low. In the nine trading days since the bottom the gold stocks have recovered only slightly and gradually. However, after Tuesday’s reversal, we see plenty of evidence that augurs for a strong recovery in May.

The gold stocks remain extremely oversold and by several metrics are more oversold now than at the 2008 low. Take a look at the weekly chart below of GDX and specifically the RSI, BPGDM (bullish percent index) and the volume. 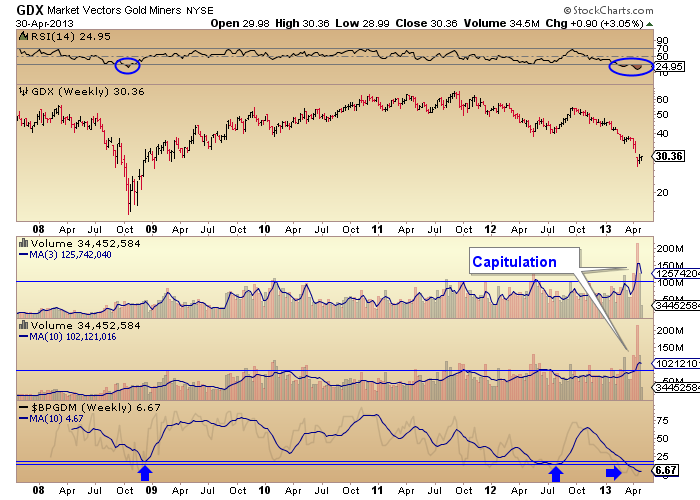 Second, a 10-week moving average of the bullish percent index (a breadth indicator) is currently below 7%. The late 2008 low was 19% while the July 2012 low was 15%. The moving average smooths out the indicator over a longer-term basis and shows how the market has been oversold for quite a while.

Finally, we plot two volume panels and smooth volume out with a 3-week and 10-week moving average. The moving averages show how volume was relatively constant for three years before exploding in recent weeks. The breakout in volume is evidence of capitulation. 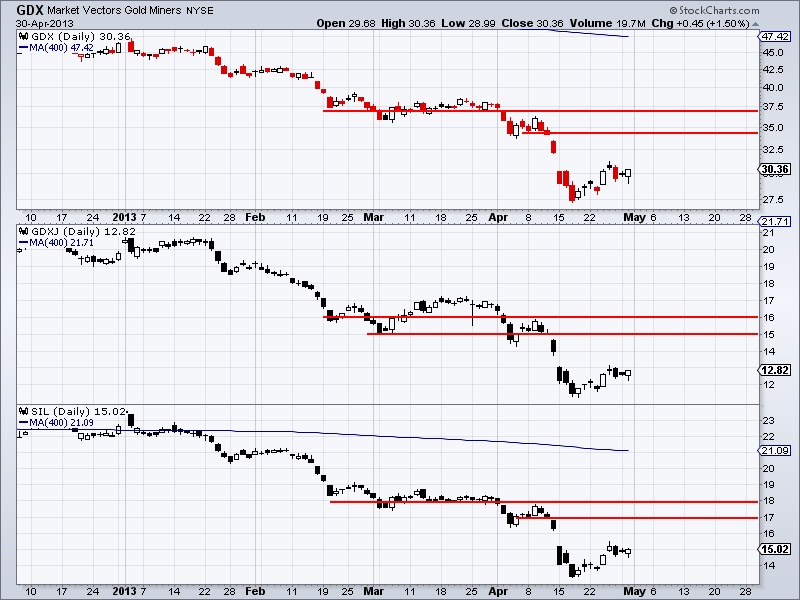 I’m sure you’ve seen plenty of sentiment-related charts showing how bullish this sector looks from a contrarian perspective so I won’t bore you with old information. However, there was an interesting development in the last COT for Gold. As of April 23, with Gold closing around $1410, commercial short positions hit their lowest level since December 2008. Also, non-commercial gross short positions (as per the chart below) surged to a new high, bettering the high of a few weeks ago. Some have likely covered in recent days but there should be more to come as the Gold price has stabilized. 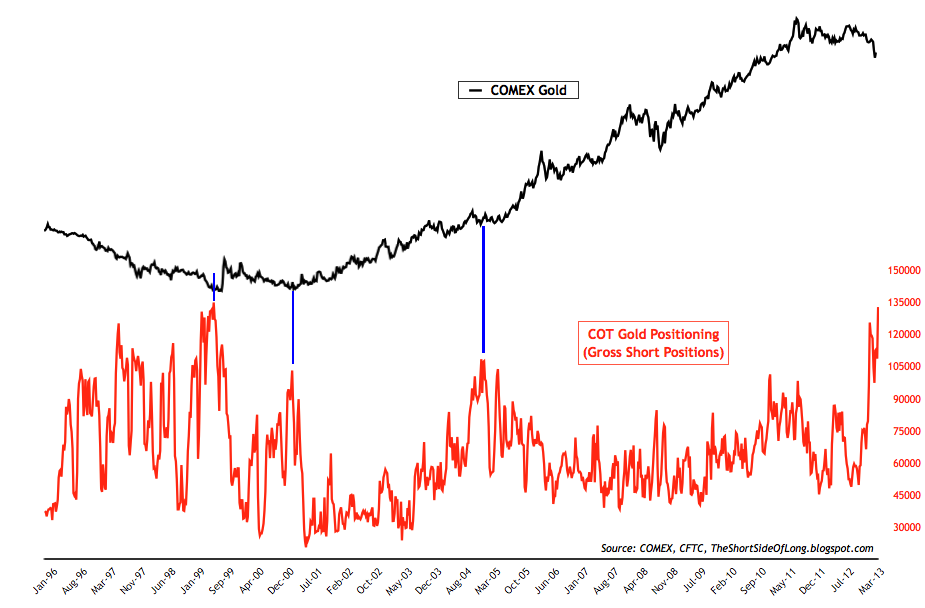 In the past week we’ve slowly added more exposure as the evidence is quite compelling. That being said, one should always have an exit strategy or a stop loss of some sort. Looking at GDX, GDXJ and SIL, they have about 10% downside to the recent lows. Long-term players could use those levels as a stop while aggressive traders could use a smaller stop.

We should note that there are much better options than playing the miners ETFs. They help us track the sector but as Rick Rule recently noted, if you buy the sector (specifically GDXJ) you will eventually get killed. Just reference the past four years. While the indices are at the same levels since 2009, many gold and silver companies are trading substantially higher since then. We just completed a 17-page report covering our current four favorite exploration or development companies. If you’d like our analysis on the companies poised to recover now and lead the next bull market, we invite you to learn more about our service.