Gold shares rebounded in line with other assets but the initial rebound has been met with more selling over the past few days. A retest of the recent lows is now inevitable. Just a few weeks ago, GDX staged an impressive intraday reversal. It gapped lower at the open and was down 7% at its lows before erasing most of its losses. GDX ultimately rallied from $51 to $58.

As it stands now, the next few days will be critical for the mining stock complex. Wednesday, GDX closed below support at $55 which hasn’t been penetrated on a weekly basis since June. The market has found reliable support this year at $52 which also marks the 600-day moving average, a level which has supported GDX at every key bottom except in 2008. 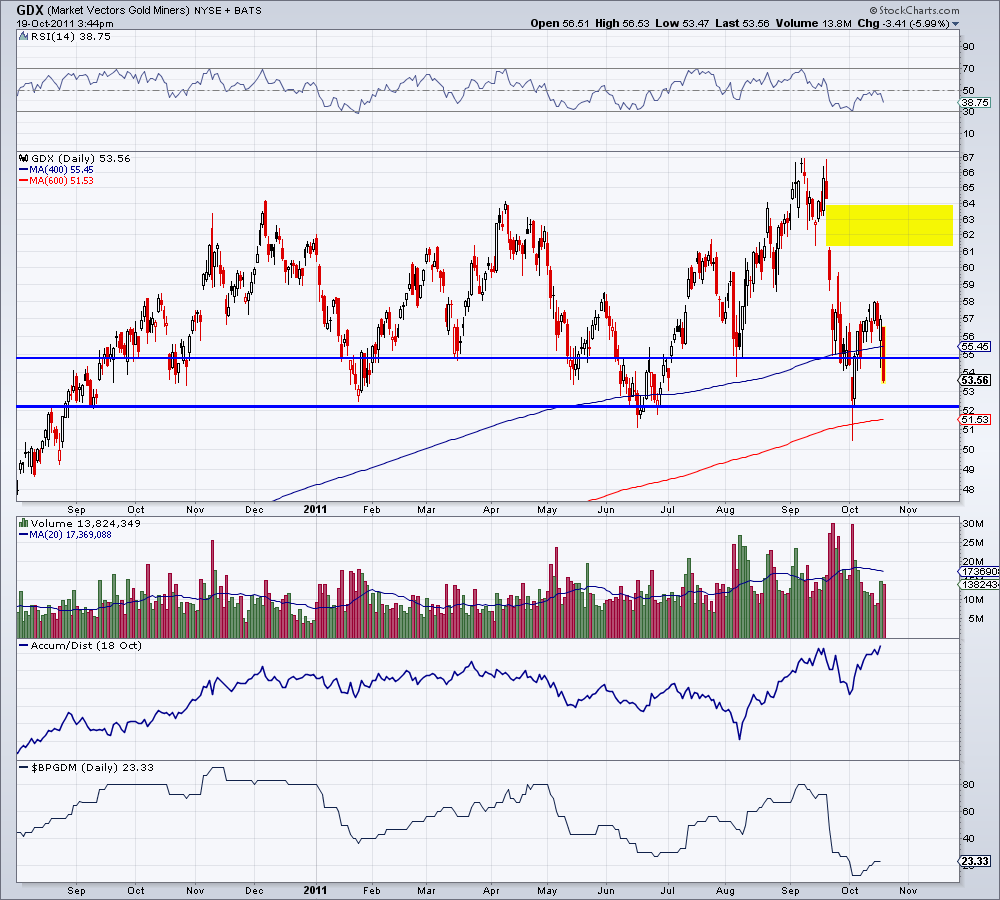 There are other things to consider beyond basic technical analysis. This chart from sentimentrader.com shows the HUI along with some breadth indicators which are looking very healthy relative to 2008. In mid 2008, the McClellan Summation index had already broken to a multi-year low. Presently, the index is yet to break to any major new low. Also, the cumulative advance decline line remains in an uptrend and close to a new all time high. 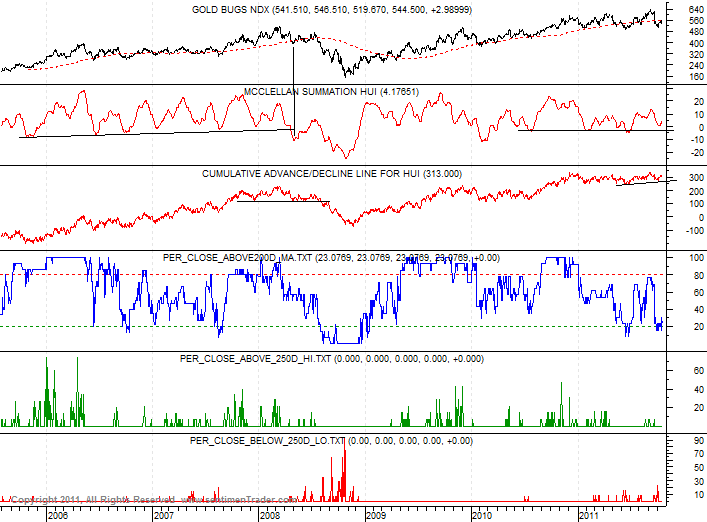 Typically, breadth indicators will breakdown first and signal trouble. That is what happened in 2008. We aren’t seeing that yet. Furthermore, we should note that the bullish percent index (the percentage of stocks on P&F chart buy signals) for GDX is only 23%. The recent low of 16% was the lowest figure since, you guessed it late 2008. Needless to say, the gold stocks are quite oversold.

In addition to being oversold, many analysts believe the gold stocks are undervalued. Among others, Frank Holmes via TD Securities finds that in particular, the explorers and developers are significantly undervalued. It is hard to argue with the following chart. 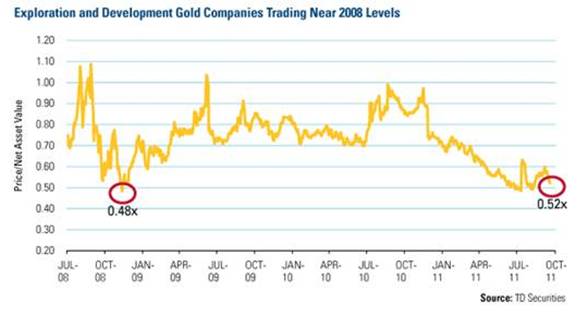 More important than being undervalued, gold stocks are under-owned. After all, if they were over-owned then who would be left to buy? A recent MoneyShow article mentions that the TIS group, a research-oriented institution finds that gold stocks are quite under-owned. Quoting from the article:

The total value of all gold mining shares in the world is about $240 billion, but less than 1% of all global pension fund assets hold gold or gold stocks. If market conditions persuade them to double their weighting in gold shares, it would cause $300 billion in new buying that would leave shares in shortage.

You may be surprised to learn that most pension funds and individuals have not been investing in gold mining stocks or the metal itself, even though gold has been the trade of the millennium.

These are times when discipline has to trump emotion. The emotional investor is worried about the current environment and a pending retest of the lows. Will they hold? Is this 2008 all over again? All we can do is consider the evidence and position ourselves accordingly while mitigating all risks. This is a bull market, so over time the market will trade much higher. That does not mean we can’t fall another 20% before a bottom. One should have a plan and cash if that is the situation. Also, one shouldn’t have too much cash if the market rockets higher after a retest. If you’d like help from a professional in navigating and profiting in these markets, then we invite you to learn more about our premium service.