At the end of December we posted a commentary titled “Three Things that could Halt Gold’s Run.” We theorized that strength in conventional markets pressures Gold. When stocks perform well, mainstream gurus and stock jocks can ignore Gold. Here is a snippet of our comment:

Currently, stocks are performing well as are commodities led by energy. As a result, some investors feel they won’t need to invest in Gold if the “conventional” options are performing well. I expect this to continue in the early part of Q1 in 2011. This is partly why the precious metals complex is consolidating or correcting.

Interestingly, stocks and commodities have continued higher and higher making new recovery highs. Precious metals on the other hand, diverged and experienced a routine but significant correction. Gold has underperformed for months. We believe this is a healthy divergence which could be the very beginning of something important.

Bears and deflationists like to champion the “all one market” theory. While this can be true from time to time, it is incorrect in the larger picture. First of all, since 2000 stocks are in the red while Precious Metals (2nd row in chart) and Commodities (bottom row) are significantly higher. Moreover, check the performance during each bear market in stocks. Precious Metals gained during both bear markets! 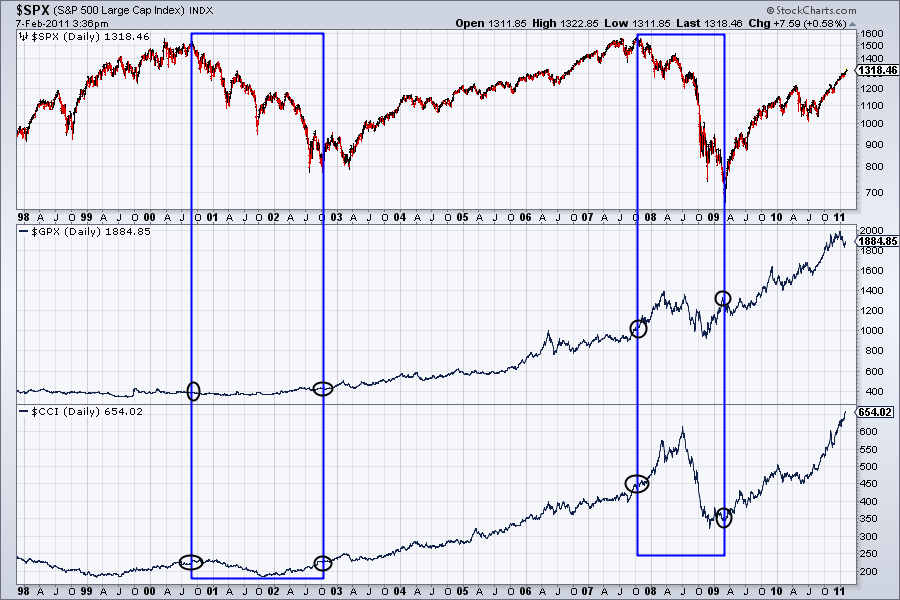 Thus far, stocks are actually following our forecast. We are looking for sizeable gains but a peak in April/May. Higher interest rates and inflationary pressures will cause a mild bear market similar to what we experienced in the late 1970s and from 1910-1914.

The chart below shows the 30-year Treasury Bond. The market is breaking down and is likely to test support at 115. The good news is that the bullish consensus was recently 20%, which means there are too many bears and bonds should bounce. However, the market is now below the long-term moving averages and dangerously close to breaking to multi-year lows sometime in 2011. 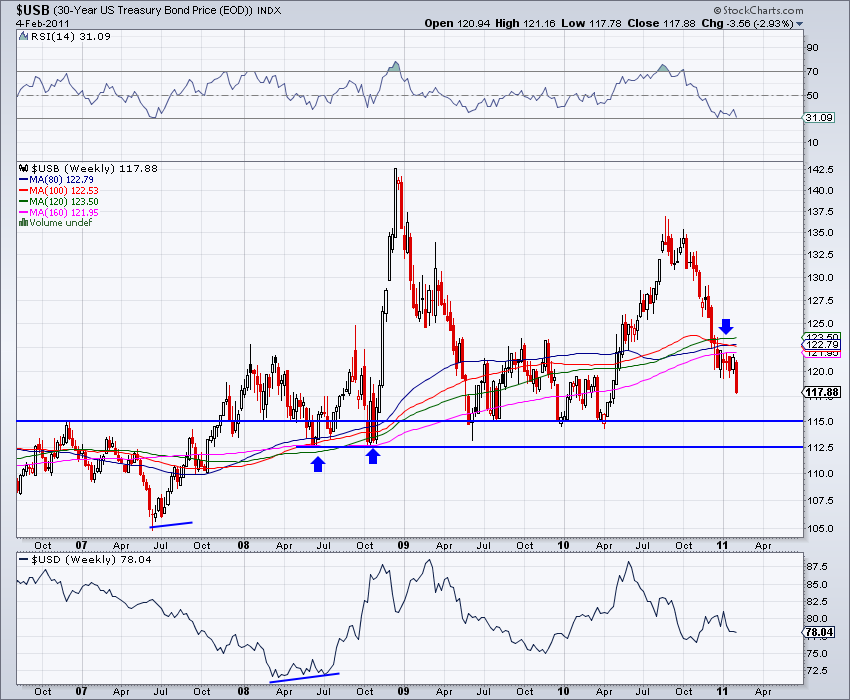 A breakdown in Treasuries means higher interest rates across the entire spectrum. This means higher borrowing costs for homebuyers, homeowners, corporations and Uncle Sam. Increased monetization from the Federal Reserve will put upward pressure on input costs for most corporations. As a result will we see a mild bear market in stocks with continued inflationary pressures. The factors that will cause the new bear market in stocks and bonds, are the same factors which will drive an acceleration in Precious Metals.

With stocks and bonds in a bear market, your friendly neighborhood investment professional and his ilk will have nowhere to turn but to Precious Metals and hard assets. You see, until what will be a few months in the future, there were other options (aside from Precious Metals). Treasuries performed well from 2000-2003 and from 2007-2008. Stocks performed well from 2003-2007 and from 2009-2010. This is why even 11 years into a bull market, the global allocation to Gold is only 1%.

Fear not fellow gold bug! Our time is coming. Three to six months from now, bonds and stocks will be in a simultaneous bear market for the first time since the late 1970s. Yet, this time around the fundamentals for Precious Metals are even more powerful and sustainable. Even those who trumpet the “stocks are an inflation hedge” argument will be forced to chase performance in the coming bubble and mania in precious metals.

In the meantime, speculators and investors are best advised to do their due diligence in order to uncover the value and growth plays in the junior mining sector which may explode in the coming years. We certainly are for our subscribers.

Accumulate Gold but Be Cautious on Silver