This essay is based on the Premium Update posted on December 10th, 2010

We picked up the Asian addition of The Wall Street Journal this week and on the back page was an article titled “China reveals Huge Appetite for Gold.” The article states: Gold’s record rally has been attributed to everything from worries about inflation, the dollar and the emergence of exchange-traded funds. One big factor many may have missed: huge buying from China.

We haven’t missed it. We have been writing about the rising Chinese demand for gold in many previous updates.

It used to be that America was the New World and Europe was Old. Now they both look frayed around the edges and the New World label seems to belong to China and other emerging market economies. This new growth has been accompanied by a voracious appetite for the yellow metal.

Data cited last week by China’s state-run Xinhua news agency showed that China imported 209.7 metric tons of gold in the first 10 months of the year, a fivefold increase compared with the same period last year. This is interesting. China is now the world’s biggest producer of gold and consumes all its own production. China’s booming mining industry produced 277 metric tons of gold so far this year, up 8.8% from the same period last year. This means that in addition to buying up everything from local production, they are also importing a hefty chunk for a total of at least 486 metric tons so far. Without a doubt, a good portion of this gold is finding its way into the vaults of the People’s Bank of China gold reserves. Keep in mind that in April 2009 the People’s Bank of China announced that it had added 400 tons to its reserves for a total of 1,054 metric tons making China the world’s fifth-largest holder of gold, just ahead of Switzerland, and among the six nations plus the International Monetary Fund that have reserves of more than 1,000 metric tons.

Over the past several years, China’s money supply expanded by over 50%, due to a massive lending boom that helped generate record GDP growth. That boils down to a lot renminbis searching for somewhere to go. The Chinese are just as worried about inflation and the erosion of the value of paper money as the rest of us. They have been looking for tangible safe investments in which to park their cash. Their problem is that as individuals they are limited in where they can invest. Capital controls restrict investment opportunities for individuals abroad. In China they can place it in a standard bank account and receive a negative rate of return, given an inflation rate running at about 3%. They can also invest in the stock market, but Chinese equities are much more volatile than those in developed markets, so that carries some risk. That leaves real estate, gold and other tangible assets.

Two things happened at about the same time recently. On the one hand the real estate market was beginning to look like a bubble and the government made all out efforts to slow it down, and on the other hand, the gold market opened up for Chinese citizens.

The WSJ notes that up until a few years ago China’s gold market was strictly controlled by the central bank, which bought all the gold mined domestically and then sold it to jewelry makers. Recently, the government loosened restrictions on buying, both by individual and institutional investors. Just this August China began allowing more banks to import and export gold, opening up the gold market to the institutions and their clients. Last week the Chinese approved the country’s first gold fund designed to invest in overseas listed gold ETFs. This year many Chinese investors added gold to their portfolio and at the Shanghai Gold Exchange, trading volume rose 43% to 5,014 tons in the first 10 months of 2010.

The major trends in any market are caused by changes in the fundamentals, and since we have just seen an improvement in the latter, let’s see if the long-term charts reflect that (charts courtesy by http://stockcharts.com.) 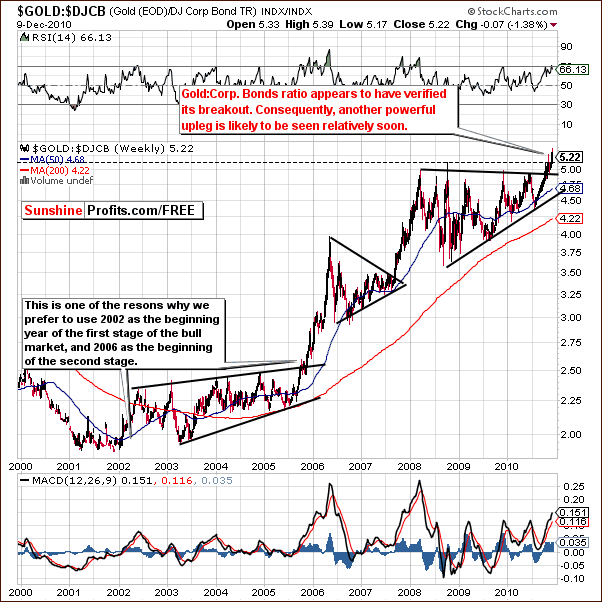 They do. The very-long-term chart that you can see above features the ratio of gold to corporate bonds. Here, we clearly see the distinction between long-term consolidation and long-term rallies. Once a consolidation has concluded, the breakout is generally quick and sharp to the upside. Of course, the rallies in the ratio correspond to the major rallies in gold itself, which is why it is important to analyze it today. We have seen the aforementioned rallies on two occasions both in 2005-2006 and again in 2007-2008.

Based on prior trends, if this ratio breaks out above the resistance line, a bigger rally is likely to be seen. It appears that we are in such a situation today. There is a strong likelihood that once the consolidation is over gold may very well rise to the $1,600 level.

Whether or not it’s going to take place right away is a different story. Please take a look below for details. 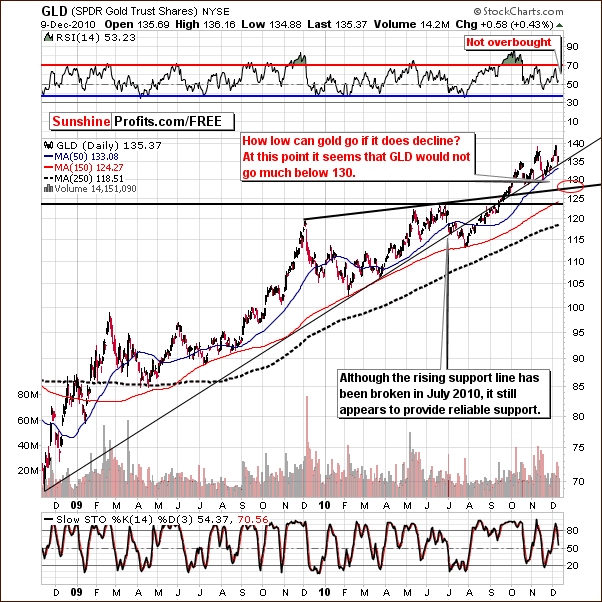 Zooming in slightly provides us with an estimate of the probable downside target level if the decline is to continue. Based on recent price movement and historical trends, a decline here could possibly be seen to the $128 level. This would correspond to a spot gold price close to the $1,300 level. 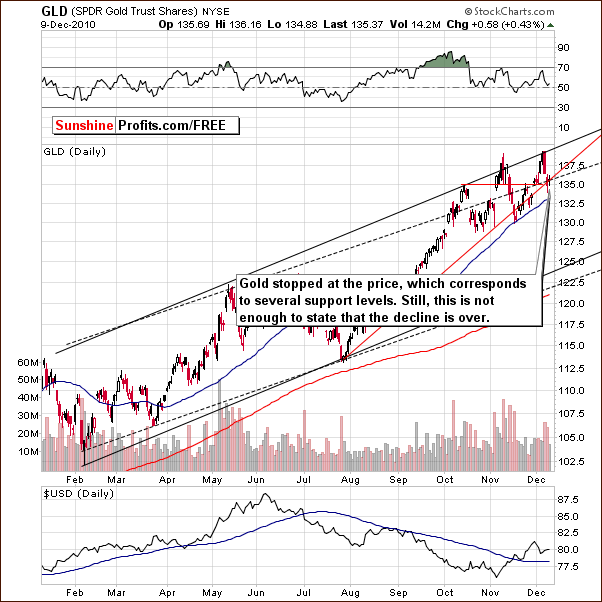 Zooming further allows us to see that several support levels have together stopped a recent decline. This could be interesting phenomenon to those, who still doubt the usefulness of the analysis charts from the technical perspective. Volume levels have been higher on the downside and since the recent decline was quite small, it seems appropriate to wait for additional signals before any bullish sentiment surfaces.

There’s more to the analysis of volume than the above statement (available in the full version of this essay), but the main point remains unchanged. Meanwhile, let’s move to the analysis of the ratio that should be included in the arsenal of every Gold and Silver Trader – specifically because of its accuracy in predicting local tops. 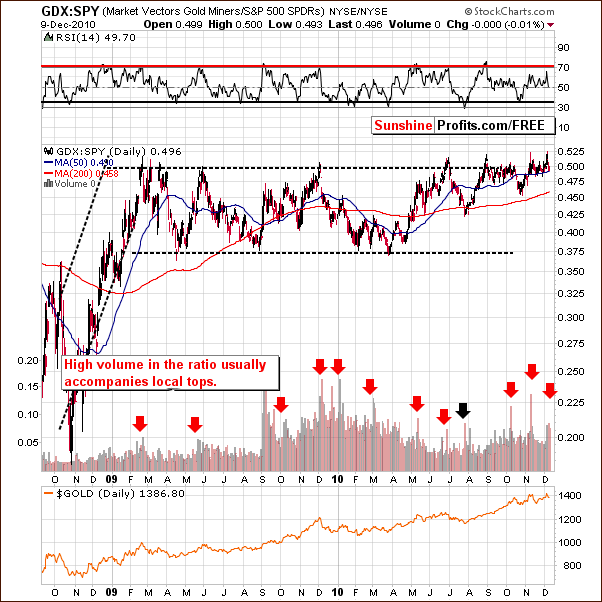 The GDX:SPY is a measure of mining stocks performance relative to all other stocks. We have previously discussed the unique single spike in volume signal as one, which has been extremely reliable in finding local tops in the past. In last week’s Premium Update, we wrote about not seeing the single spike in this ratio. It did not appear that the local top was in. Soon after that, however, such a spike in volume was indeed seen, and a local top emerged.

Volume levels have been emphasized in the above chart. The high volume levels, which are noted by arrows, are very closely aligned with local tops. This is a clear indication of the importance of volume levels analysis with respect to prices. The suggestion here is for further weakness in the near-term.

Summing up, the major trend appears to be up, and it may not be long before the massive rally resumes. Still, in the short run, a corrective phase is still not out of the question. Should it materialize, it should be viewed as an opportunity to add to one’s gold and silver investments.

A Gold Correction is an Option