One way to measure the potential investment upside of silver is to measure it against gold.  Right now the gold/silver ratio is around 63.5.  In the last couple years years it’s been in the 80’s and as low as 48.  At the peak of the last precious metals bull market in 1980, the ratio touched down around 17.  I fully expect that the gold/silver ratio will once again go at least as low as 16, which is a long term historical norm (i.e. 100’s of years).  In Rome before The Fall, gold and silver were exchangeable at a ratio of 8.

Why is this you might ask?  Silver is poor man’s gold, making it the 2nd best ultimate form of currency.  When gold is over $2000/oz, it will be unaffordable for most people to buy much gold to protect themselves.  But at that point if the gold/silver ratio is still around 60, the price of silver will be a much more affordable $33/oz.  I suspect that the ratio will be a lot lower by then. Furthermore, because the relative price of silver is much lower than gold, it is more “fungible,” meaning it’s more practical as a currency for everyday mundane use.

The chart below – inspired by DC from NJ – is another way of measuring the relative strength of silver vs. gold.  As you can see, silver  has been in a steady climb in price relative to gold and is currently chewing thru a lot of “resistance,” as defined by the two horizontal black lines.  Hedge funds currently like to “game” the gold/silver ratio, which may slow down the ultimate price movement of silver against gold.  However, given that the total market value of all the available silver in the world is small compared to gold, when the “poor man’s gold” effect really takes hold, expect the price of silver to really rocket higher.  Eventually that ratio will decline to a level that is much more consistent with the ratio that held for centuries. 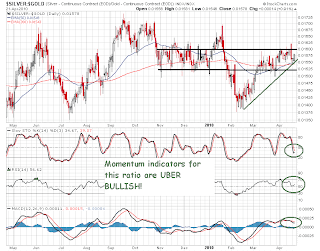 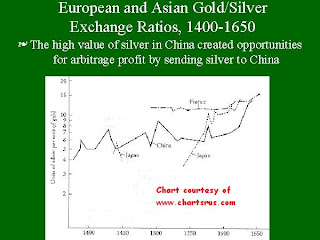 One other thought to keep in mind.  The Big Wall Street Banks are short paper silver in an unbelievably insane amount.  For instance, look JUST at the silver futures short position on the Comex, most of which is held by JP Morgan.  As of last week, the total net short position reported by the “commercial” category – largely a handful of NY banks – was 58,235 contracts.  This represents 291 million ounces of silver.  Against this, as of today, the Comex has 50 million ounces of deliverable silver.  If a little less than 20% of those holding long positions ask for delivery, the Comex will default.  The price of silver will do a moonshot.
Now think about the ramifications if what the Comex reports as inventory is really part of the fractional bullion system in place that has been verified by lawsuits, GATA and even LBMA operators…I’ll leave the rest up to you.  Suffice it to say that the last two times my fund took delivery of Comex silver, we had to wait several weeks before the bars showed up.

“7 Reasons Why Silver Will Make You Rich!”

Embry: Gold Price to Go Parabolic in Near Future – For Good Reason!