This essay is based on the Premium Update posted on October 22nd, 2010

We’ve heard a lot about the currency war, but next thing you know they’ll be calling it the McCurrency War. If we needed any proof that the Chinese yuan is 40 per cent undervalued, we finally got it from the Economist. The magazine’s famous Big Mac Index compares the prices of a Big Mac in various countries making exchange rate theory more easily digestible.

The Economist reported that in China a McDonald’s Big Mac costs just 14.5 yuan on average in Beijing and Shenzhen, the equivalent of $2.18 at market exchange rates. In America the same burger averages $3.71. The average wage is higher in the US, so theoretically Big Macs can be more expensive, but still, the discrepancy is clearly visible.

That makes China’s yuan one of the most undervalued currencies in the magazine’s Big Mac index, which is based on the idea of purchasing-power parity. This says that a currency’s price should reflect the amount of goods and services it can buy. Since 14.5 yuan can buy as much burger as $3.71, a yuan should be worth $0.26 on the foreign-exchange market. At just $0.15, it is undervalued by about 40%.

As we have written before, the currency war is a sticky issue that just won’t let go. Because China pegs the yuan to the dollar, and keeps the rate of the yuan artificially low, exporters in other countries have been losing their competitive edge against China, their chief rival in the global markets. In response, many governments are taking measures to lower the value of their currencies.

Many observers say China’s move to raise key rates is a classic Economics 101 textbook response to the country’s dangerous property bubble, strong growth and rising inflation. In most economies, higher interest rates attract foreign investors looking for better returns and the money flooding into the economy usually boosts the local currency. But China’s economy is mostly closed, limiting the impact of higher rates on the yuan.

In the technical part of this week’s essay we’re going to focus on gold. On the very long-term gold chart (charts courtesy by http://stockcharts.com.) we see declines have moved lower after having touched the long-term resistance level, the upper border of the very long-term trading channel, marked with thick blue line. This is not surprising as a breakout above resistance of this strength is not expected on a first attempt. After that, we look forward to see this trading channel to accelerate. 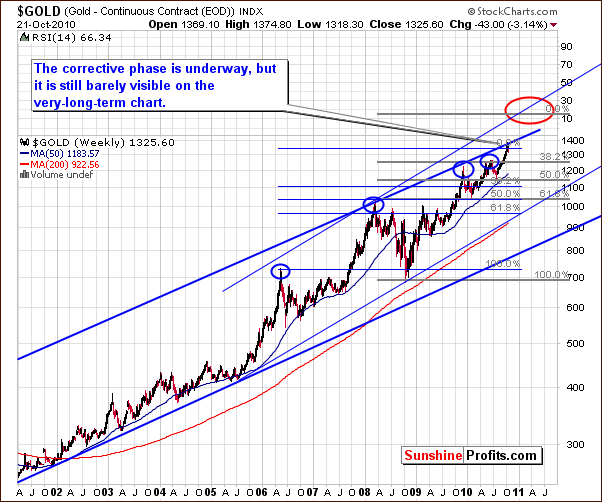 It now appears that the rally has been held and although a correction is surely underway, it is barely visible in this chart. The decline is simply not severe enough to be clearly seen from a very long-term perspective. This could be also an additional indication that the price did not fall enough. 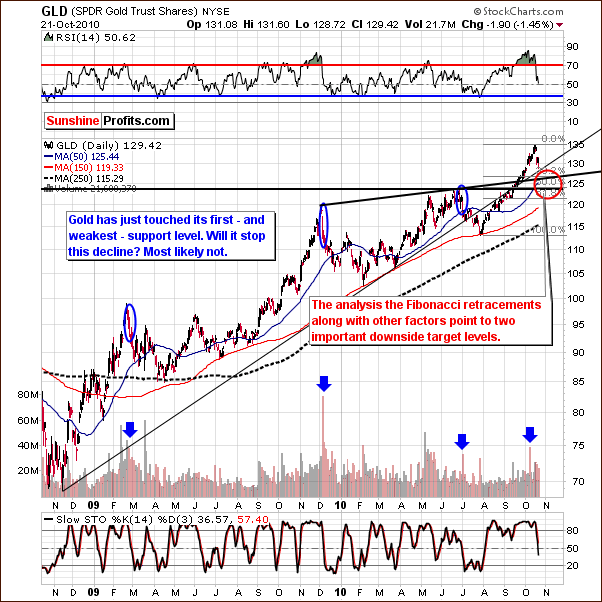 The long-term chart for gold allows us to illustrate likely target area for the near-term. We have not changed our sentiment or the target levels themselves, as further declines appear likely. Fibonacci retracement level analysis points to two important downside target levels. These are seen in our chart marked with red ellipse.

The first long-term support line may appear to have stopped the recent decline. This is however unlikely as it is but a minor support line and quite weak. We can see that it has been broken through on several occasions in the past. This was seen in August and September and for this reason, it is unlikely to have anything more than a slight, temporary effect upon the declining trend.

Recent price gap in GLD ETF (noticeable around the price level we are right now) is support level by itself. But even if price will move back up it will most likely only create a short-term bearish head and shoulders formation, starting in the beginning of October and ending right now. Providing that the upward move is minimal (not higher than intra-day highs) and accompanied with low volume, the head and shoulders pattern would likely bring prices to the red target level in our chart. This would also be a signal to add to short positions if so inclined.  The short-term chart with detailed targets is reserved to our Subscribers. 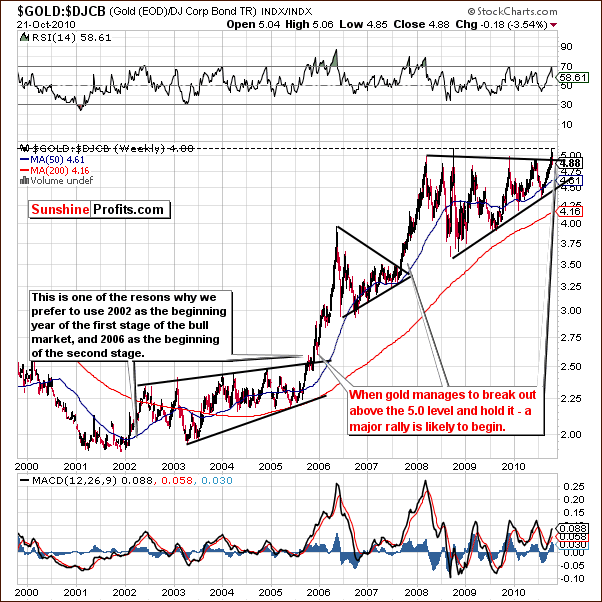 Our third gold chart this week is the result of our Subscriber’s inquiry. The ratio takes gold’s price and divides it by the Dow Jones Corporate Bond Index. Since gold has outperformed this index for the past several weeks, the ratio has been attempting to reach new highs but has thus far failed. No severe declines have been seen either.

The chart we have created covers the whole bull market period for precious metals. This allows us to see how the Gold-DJCB ratio has performed in the past. Note that breakouts have been seen followed by sharply higher values from one consolidation period to another. The next big rally may indeed be upon us – if the ratio manages to decisively break above the 5.0 level. Please note the pattern of this ratio during 2006 and 2008 rallies.

After a consolidation period, a ratio greater than 5 could indicate a major rally if such a level is held for several days. No breakout has been seen yet and the rally has therefore not been confirmed. Conclusive calls can only be made after this is seen. In the past the sharp move upward in gold, silver and mining stocks coincided with the breakout in the ratio.

This chart also precisely explains why we often refer to the 2002 as the beginning year of the bull market, not the 2000. It is also clearly visible why we see the 2006 as the beginning of the second stage of this bull market. This is when the major breakout materialized (it was also the time when gold’s rally became visible from the non-USD perspective).

Summing up, gold prices are likely to rise in the medium-term (months are concerned here). It is likely however that in the short-term (next couple of weeks) we will see a period of consolidation and possible further price declines.

The Myopic World of Asset Allocation Sees Only Stocks, Bonds, and Cash

Gold Explained, And Then Some