I want to discuss something that came up on the blog Friday. An anonymous poster hinted that we were going to see more gold weakness in the days ahead because big money was having to sell  positions. Folks, big smart money traders don’t sell into weakness. These kind of investors don’t think like the typical retail investor who is forever trying to avoid draw downs. Big money investors take positions based on fundamentals and then they continually buy dips until the fundamentals reverse. The fundamentals haven’t reversed for gold so I’m confident in saying that smart money isn’t selling gold, it is using this dip to accumulate.

With that being said there are times when big money will sell into the market and it is why so often technical analysis as it’s used by retail traders doesn’t work. They do so in order to accumulate positions. Let me explain.

When a large fund wants to buy, it can’t just simply start buying stock like you or I would. Doing so would run the market up causing them to fill at higher and higher prices. Unlike the average retail trader, smart money attempts to buy into weakness and sell into strength. (Buy low, sell high). In order to buy in the kind of size they need without moving the market against themselves, a large trader needs very liquid conditions. Ask yourself, when do those kind of conditions exist? They happen when markets break technical levels.

If big money is selling it is because they are trying to push the market below a significant technical level so all the technicians will puke up their shares. By running an important technical level big funds can trigger a ton of sell stops to activate, allowing them to accumulate a large position without moving the market against themselfs in the process. We saw this very thing happen in the oil market recently and also in February as gold bottomed. 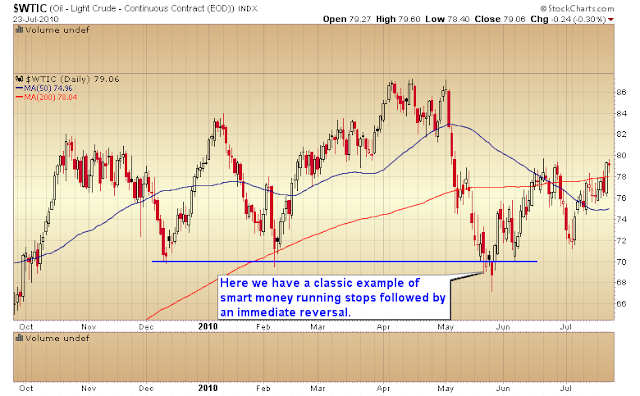 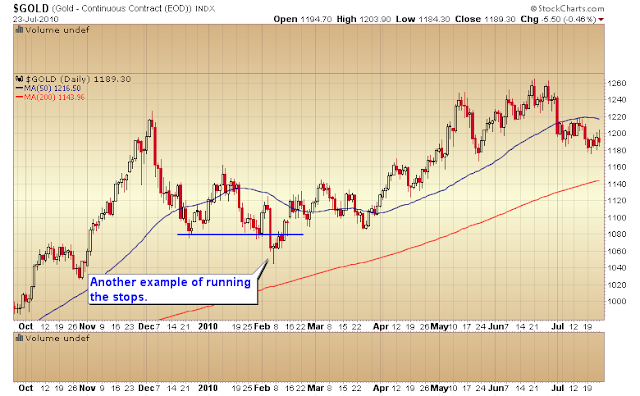 Technical traders wrongly assume these breaks are continuation patterns but the reality is that very often they are just smart money “playing” the technical crowd so they can enter large positions. The key to watch for is an immediate reversal of a technical break. When that happens you know there was someone in the market buying when everyone else was selling. 9 times out of 10 it was smart money.
At the moment everyone is jumping on the bear side for gold. Remember we saw this exact same sentiment in the stock market 3 weeks ago. I knew the bears were going to be wrong simply because the market was way too late in the intermediate cycle for there to be enough time left for a significant decline.
The gold bears are going to be wrong also and for the exact same reason. It is just too late in the intermediate cycle for there to be enough time left for anything other than a minor decline.
I’m now waiting, and hoping for a break of the May pivot. I want to play that break if it comes like a smart money trader. That means I want to buy into the break instead of panic sell like most dumb money retail traders will invariably do. 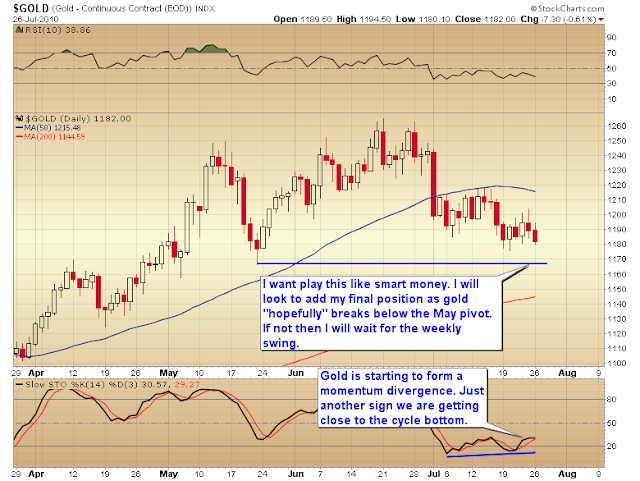 The reason of course is that gold is still in a secular bull market. In bull markets you buy dips.

Also the dollar with the break below 82 this morning is starting to show signs that it is now in the clutches of the 3 year cycle decline. Every C-wave so far in this 10 year bull market has corresponded to a major leg down in the dollar. I’m confident this C-wave will inversely track the dollars move into that major cycle low due early next year.

Sentiment wise gold has now reached levels more bearish than at the February bottom. That means gold is at risk of running out of sellers.

And finally, and most importantly it’s just simply too late in the intermediate cycle for gold to have enough time for a significant drop. This is the 25th week of the cycle and the intermediate cycle rarely lasts more than 25 weeks. That puts the odds heavily in favor of a major bottom either sometime this week or next. And don’t forget gold is about to move into the strong demand season. Like clockwork gold invariably puts in a major bottom in July or August before the run up into the strong fall season.

The bears are going to be wrong again.

Embrace the Sell-Off in Gold

The Strength of Reaction and Precious Implications