But I digress.  I think by now most people understand that the Government-reported Consumer Price Index is not only a complete farce, but is a complete insult to the intelligence of anyone paying attention or not on entitlement program payments.  The most rediculous measure of price inflation, and the one that Bernanke insists on shoving up our ass, is the “core” CPI reading, which excludes food and energy.  Ummm, let’s see.  If I don’t eat and I don’t heat my home or drive my car, then I don’t have to worry about inflation.

Let’s take a look at some charts and you can decide if you think price inflation is building in the system:

Heres’ the CRB Commodity Channel Index, and index of 28 global commodities – it happens to be up 58% since its December 2008 low (please click on the charts to enlarge):

Feeder Cattle – Up 25% since December

Anyone NOT see price inflation?  I was having a conversation with someone who has been a long-time goldbug the other night.  He mentioned that he was worried about deflation.  I asked him to explain to me where he was seeing deflation, other than in the price of housing.  He could not point out any examples.
What’s more baffling to me is that those who are making the deflation argument point to debt destruction and the money supply.  Can someone explain to me where there is ANY debt destruction occurring?  Yes, the financial sector has experienced a big decline in debt outstanding, but that’s STRICTLY because the Fed, aka Banana (Republic) Ben Bernanke, has monetized over $1 trillion of bad assets from the banks and banks have shifted $100’s of billions of debt to the Treasury via TARP (yes Virginia, most of the TARP money has not been repaid).
We know that the U.S. Government debt outstanding is going to approach $14 trillion by the end of the year.  It began 2010 just below $12 trillion.  And here’s the household mortgage debt, once again: 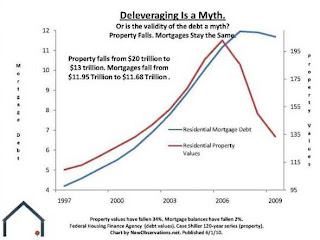 I’d love for a deflationist to explain to me where there is bona fide debt “destruction” occurring in the system…As for the money supply, my colleague and friend, “Jesse,” wrote a blog a few weeks ago in which he presented the money supply as determined by the Austrian School of Economics.  Here’s the link to his essay, which contains the definition of the Austrian’s “True Money Supply,” TMS.  And here’s the chart: 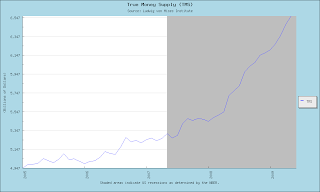 Well, there you have it.  The two pillars beneath the deflation argument turn out to be pillars of sand.  Overall the level of debt in the system is not being “destroyed,” and the money supply is not contracting in the way the Orwellian metrics are presented by the Fed.  Yes, the value of your home is crashing, but that may be the only real asset falling in price.  Well, golf course green fees and country club memberships are dropping in price too.
I know that based on my personal experience with the overall cost of living of my life, it seems to get more expensive every month.  But just wait until the price of the commodities above begin to work their way through the producer channels and into the grocery store, gas station, utility bills etc.  And soon we will feel the effects of the healthcare legislation (unless of course you are one of Obama’s chosen category to receive healthcare which is paid for by the rest of us).   Oh ya, and then there’s this: 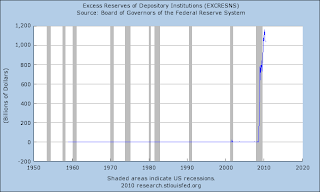 That shows those nefarious excess bank reserves.  The Fed has been paying the banks interest on those reserves as a means of keeping QE1 from flooding the system and unleashing another source of price inflation:  more dollar devaluation.  That money shown above is printed money that has not hit the economy yet. However, in a futile attempt to pull the economy out of its current cliff-dive, the Fed has indicated it may stop paying interest on this money.  I suspect the money will be put to use financing Treausury issuance and into the stock market.  But since Government deficit spending is inflationary, this money will contribute to what I believe will be an acceleration in price inflation.  Rest assurred, however, that the Government reported measure of inflation will not show much, if any price increases.
And one more point I’d like to make.  There’s a reason gold keeps moving higher.  It is the ultimate barometer of currency devaluation, which is the tautological twin of price inflation.  Gold has increased nearly 450% since its $250 bottom at the start of the decade.  If you don’t think that’s a measurement of the devaluation of the U.S. dollar, that’s fine – but you are wrong.  But here’s an article of interest from the world’s second largest – formerly largest until China took over – buyer of gold.  It turns out that India is experiencing double-digit price inflation:  Rampant Inflation In India.  I got news for you in case you haven’t figured this out:  expect that the demand for gold from India will accelerate this year.  I would surmise that is why the nearly 100,000 gold contract COT liquidation has produced only an 8% price correction.  Historically a massive COT liquidation produced 20-40% price corrections.  Got gold?
Source: http://truthingold.blogspot.com/
Previous

Breaking Down The Charts: Gold and Silver