As we travel to Toronto for the Cambridge House conference, we thought we’d share a few points from our upcoming presentation titled “The Setup for a Gold Bubble.” There are many different ways we can analyze this. By that we mean fundamental triggers, historical ratios, valuations and potential money flows, etcetera can explain the setup for and why this bull market will become a bubble. Today, we focus on intermarket analysis, which is one of our favorite subsets of technical analysis.

For a bull market to become a bubble, it needs to attract excess money flows from other asset classes. In other words, during a bubble, money flows from various asset classes into a single one. Prior to the bubble the market must be an under-owned asset class with room to absorb the massive flows. This chart, from Pierre Lassonde’s recent presentation shows Gold’s share of global asset allocations. It currently is below 3%, which is extremely low in comparison to the 1980 figure of 14% and considering that the bull market is in its 13th year. 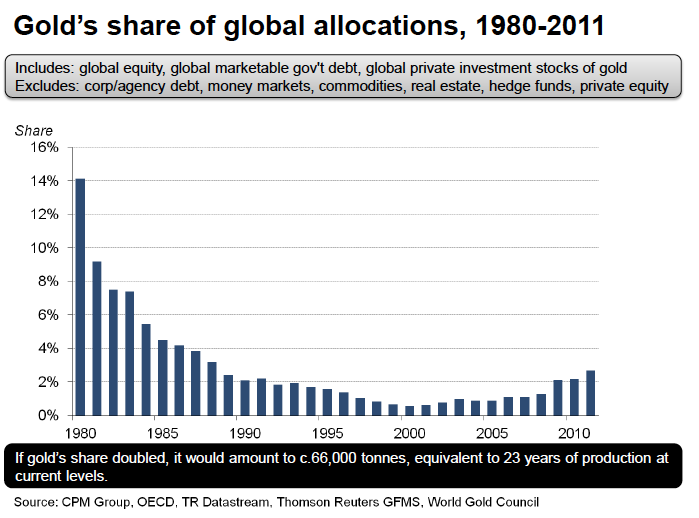 While some of the newly created money and debt will find its way into Gold, the biggest inflows into Gold will come from other markets and particularly bonds. The bond market, which dwarfs the equity and commodities markets, is by far the biggest market in the world. In recent years and in response to the global economic malaise the average investor and average institution has shifted funds out of equities and into bonds. Inflows into bond funds have been gargantuan while inflows into equity funds have been negative. Thus, in an intermarket sense, the trigger for the coming bubble in Gold will be the shift of funds out of bonds and into Gold and the like. 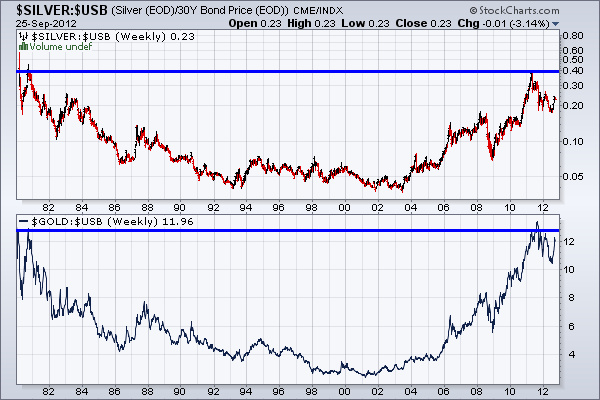 In the meantime, Gold and Silver and the shares have begun to correct and digest the strong gains from the recent rebound. October is the only bearish part of the seasonally bullish period. Interim bottoms typically occur in the middle of or near the end of October. Thus, the coming days and weeks could be an opportunity to shed some bonds in favor of bullion and to pickup some stocks, which you may have missed at the last bottom. If you’d be interested in professional guidance in uncovering the producers and explorers poised to outperform then we invite you to learn more about our service.