According to the SPDR GLD electronic traded fund (ETF), retail investors poured in another $900 million this week into the Gold ETF, on top of last weeks inflows of $3.3 billion. The 4 week inflows stand at almost $6.5 billion, which is 11.3% of the fund. This is the largest monthly inflow since May 2010. Comparing that to the start of July, where GLD ETF held $57.47 billion in assets, we can see that retail investors continue to pile in. 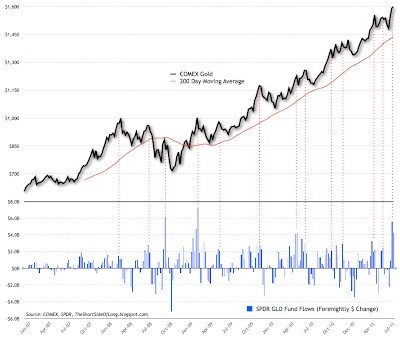 On top of that, Hulbert Gold Sentiment Index stands at 67% bullish exposure and is starting to approach the extreme levels of 70% we saw earlier in May, when Gold dropped from $1577 to $1462 in a matter of days. On top of that, Gold speculators tracked by Commitment of Traders report, showed that contracts increased from 157,775 three weeks ago, to 219,297. That is almost a 40% increase and the highest level since December 2010, when Gold topped at $1432.
One positive aspect Gold has behind the current rally is that seasonality tends to be very positive during August and September. Both months tend to be positive at least 80% of the time since 1980s, with September positive 97% of the time.

Finally, for those who haven’t read it already, I looked at the current bull market in Gold last week, coming to the conclusion that after 11 straight annual gains, a correction should be in the cards sooner rather than later. Obviously, this correction should represent a great buying opportunity.
Post Source

Interview with the Korelin Economics Report 7/22