Gold and silver have spiked inexplicably this evening.  I can’t find any news that would have triggered the sudden, unusual early evening action.  Typically the early evening action is low volumn and the manipulators like JPM tend to try and swat the metals lower until Bombay and Hong Kong open up.  Then the physical accumulators take over.  This is actually a tradeable pattern.

At any rate, given no news, I took a quick perusal of hourly and daily charts of the USDX.  Here’s the daily (the hourly looks bearish, but that’s obviously of shorter term significance): 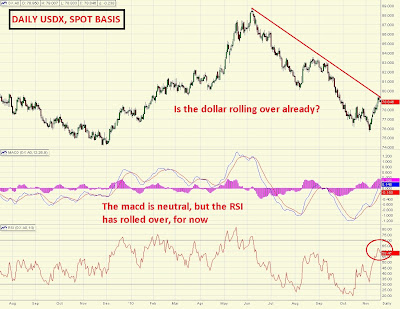 (click on chart to enlarge)
I am not willing to commit to calling a resumption of the downtrend.  But I do think the message of the action in gold/silver tonight reflects the market’s expectation of a possible rollover.  I thought the Fed’s QE2 monetization of $8.2 billion in 10-yr Treasuries – a staggering size for this duration – sent the unimistakable signal to the market that the Government is going to start having problems selling longer duration paper, especially with $104 billion in total Treasuries on deck to be issued next week.
I will commit to saying that I believe that we are at a point in the global systemic unravelling in which gold is likely to start “disconnecting” from its correlation to the US Dollar and begin to move a lot higher against anything fiat.
Source: Is The Dollar Rolling Over Already?
Previous

Bonds, Dollar, SP500 & Gold Have Changed Direction – Are You Ready?