Source: Is The Dollar Rolling Over Already?

I decided to check in with the chart of the US Dollar index this morning.  When the dollar bounced from a rediculously oversold “technical” condition in early August, I was thinking it would move back somewhere into the 84-86 area.  I’m too lazy to run a fibo analysis, but I’m sure that area correlates with some magic, pre-programmed “black box” fibonacci lines.

When I looked at a daily and weekly chart this morning, I was somewhat startled to see the dollar “rolling over,” accompanied by a bearish formation in the macd and slow stochastic momentum indicators – especially the slow stochastic.  Here’s the daily chart: 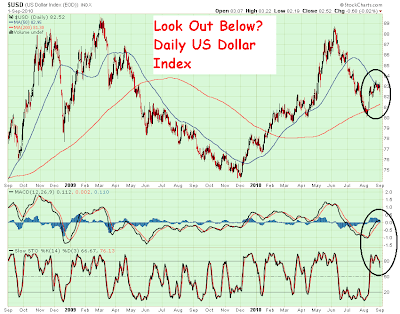 (click on chart to enlarge)
As you can see, the dollar dropped down to its 200 dma in early August, accompanied by a very “oversold” reading on the technical indicators.  A bounce was to be expected.  But what has been unexpected is what appears to be the brevity of this trading bounce.  At this point it looks like the next move is for the dollar to sell off down its 200 dma and that will be a key “test” level.  That should occur in the high 81 area.
The fundamentals point to an eventual collapse in the dollar.  At some point the Treasury/Fed are going to have start really printing money to cover all of the terminal cancers festering and growing in the system:  State insolvencies, massively underfunded public pensions,  the obviously the massive Federal spending deficit and related Treasury bond funding requirements (with one month left the Govt has issued $1.5 trillion in new debt this year, which is the true measure of the spending deficit), and obviously the deteriorating economic conditions.  The list is bigger and many of us know what the variables are.
Furthermore, expect that gold and silver will show surprising strength as the dollar continues on its downward path.  Many people are scratching their heads over the surprising strength in the metals during the last two weeks, traditionally a period when the bullion banks send the metals lower ahead of the Indian seasonal buying and while trading volumn is low prior to Labor Day. I suspect this strength is forecasting a lower dollar.  This is underscored by the fact that most sentiment indicators are still showing very negative sentiment in the gold investment community, including the “Gartman” indicator.  Gartman has been one of the best contrarian indicators during the last 5 years and about 3 weeks ago he issued a veiled “go short” call on gold. LOL.  Thanks Dennis – remember, those who can do, those who can’t publish market newsletters (the exception being Richard Russell, of course).
Finally, I’m not ruling out a possible continuation of this bounce in the dollar.  All it will take is some hefty intervention in the yen by the Bank of Japan (something that has been hinted at, as Japan is getting nervous over the big move higher in the yen) to send the yen lower and the dollar index higher.  But then again, if the BOJ manipulates this, it will likely send Japanese investors to seek refuge in gold, just like the Europeans have been doing for the last six months.
Previous

Is Silver Ready to Explode?

Silver about to Breakout Big