From UBS on Friday:  “Physical demand picked up Friday in the wake of gold’s test below $1200, with our sales to India the largest recorded since early January.”

Tulving and Company – one of the largest coin dealers in the country – announced on its website that it had its busiest day ever last Thursday. We bought more gold for our fund this morning after the Comex opening paper raid. I was put on hold twice. Tulving is more sold out of 1 oz. gold bullion products than I can ever recall seeing. Here is what happens now when the big banks drop paper bombs on the Comex: 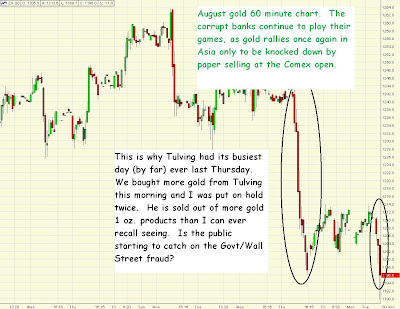 This too shall pass. In nine years I have never seen the public respond to price hits by buying physical bullion. Ultimately the physical market will blow up this massive paper fraud. Even Ted Bulter – per his King World radio interview – has thrown in the towel on his hopes for CFTC reform and enforcement of the laws with respect to Comex gold and silver positions and trading manipulation. Shockingly, he had some scathing remarks about Gary Gensler and Bart Chilton. I’m glad to see he’s finally climbed on board the reality wagon that GATA has been pulling around for several years now.
Congress Has Unwittingly Confirmed That Gold/Silver Is Money
For anyone who is expecting any kind of meaningful reform to come out of the Financial “Reform” Bill making its way throught Congress and on its way to the El Hefe’s desk, stick to your medical marijuana habit while you still have a job and can pay for it. This reform bill is turning out to be one big farce. With respect to commodities trading, the Bill requires that Banks move all of their commodities trading to a separate subsidiary which would be remote from the bank holding company. HOWEVER, gold and silver trading will remain at the bank holding company.
“Why” you ask? Aren’t gold and silver just commodities? Those of us who understand the Golden Truth know the answer.  But this move confirms that the big banks not only manipulate the gold/silver market BUT, ironically, it is an implicit confirmation by the Government THAT GOLD/SILVER ARE MONEY.
With regard to the Fed/Govt manipulation of gold/silver:
“The greatest trick the Devil ever pulled was convincing the world he didn’t exist” (“The Usual Suspects”).
Previous