In bull markets, corrections and consolidations are needed to periodically cleanse the market of extreme optimism and an overbought condition. After a market has strong run it inevitably reaches a point of resistance. This is where there are more buyers than sellers.  A market can correct in two ways. Either it declines and retraces much of the preceding gains relatively quickly or a market will consolidate near its highs for a long period of time. The first correction is a function of price while the second, time. The correction or consolidation ends when a fundamental catalyst emerges which triggers greater demand that overwhelms current supply. 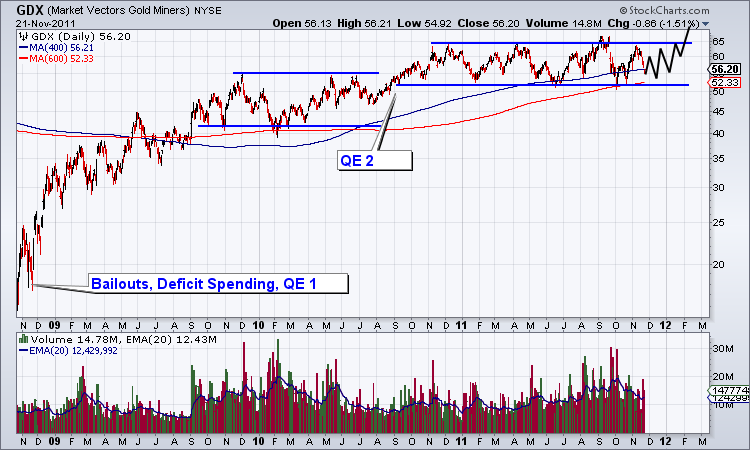 The consolidation has endured due to a working off of the overbought condition from 2009-2010 gains as well as the lack of a real catalyst. The Fed, though accomadative has been on hold while emerging markets turned their focus to inflation. European bond markets were in fair shape into the summer. However, the good news for gold investors is that a trio of major catalysts lie on the horizon and should easily trigger the next breakout.

The obvious catalyst is a massive bailout of European nations and European banks through a $3 Trillion debt monetization (the figure stated by many). Until last month the European crisis was limited and a hope of being contained. Since then interest rates on French bonds, which had been following Germany began following Spain and Italy higher. The 10-year yield on French bonds has surged in the past six weeks from about 2.50% to nearly 4%. Meanwhile, Ambrose Evans Pritchard, the intrepid reporter wrote that Asian investors are pulling out of German Bunds and Europe all together. Bund yields (10-year) look to be forming a double bottom just below 2%. Bunds stopped rising in last month as yields surged in Spain, Italy and France. Understandably, Germany has stood in the way of an ECB bailout. However, the sooner the crisis spreads to Germany, the sooner we can expect a German-led ECB bailout.

Moving over to Asia, we hear that China has started to turn its focus away from inflation and towards growth. Last weekend the Chinese Vice-Premier, Wang Qishan indicated publicly that “ensuring growth is the overriding priority,” and “unbalanced growth would be better than a balanced recession.” He also noted the persistent weakness in the global economy.

China’s tightening, which began October 2010 has been effective. It was recently reported that Chinese inflation rate has fallen in recent months from a high of 6.5% to 5.5% and industrial production growth slipped to a one-year low. GDP growth has slowed in recent quarters from 9.7% down to 9.1%. According to analysts at Citigroup, the slowdown could intensify. Bloomberg reports:

If tightening measures aren’t relaxed, property investment will “scale back significantly” in the next two quarters, “dragging down the whole production chain and GDP growth,” Minggao Shen and Ben Wei, analysts at Citigroup, wrote in a report dated yesterday. Exporting firms are also facing an environment worse than in late 2008 due to the overseas slowdown and rising costs, they said.

Last but not least let us consider the USA. Our bond market remains the strongest in the world while the US Dollar is likely to rally further in the near term. This combination along with lower commodity prices and a global move to inflationary policies will allow the Fed the political cover to institute another round of debt monetization. Combined with potential action in China and imminent action in Europe, this is powerful policy that should result in a massive catalyst for select markets.

The current investor psychology of fear, indifference, and surrender is leaving them vulnerable as they miss the big catalysts that lie directly ahead. Gold and gold stocks remain in excellent position for a potentially tremendous 2012 and 2013. Required action from Europe, a shift in Chinese policy and more monetization on steroids from the Fed is going to catapult the bull market in precious metals like we haven’t seen since the late 1970s. In our premium service, we seek to manage the short-term risks in this volatile sector while keeping focused on the major opportunities. The technicals are lined up while fundamental catalysts are soon to emerge. The combination could lead to an explosive 2012 for gold bugs. We invite you to learn more about our service.