Here’s a great chart I borrowed from:  HERE 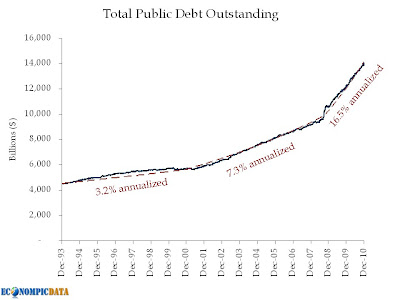 The amount of debt represents the difference between Government revenues and Govt spending.  Does this chart show any signs of a Government that has the ability to reduce its spending deficit?  Now, the Fed balance sheet is growing multiple billions by the day, so the real spending deficit is even bigger than is represented by the above graphic.

I’m all for the tax cuts just passed, but it has to be offset by cuts in spending.  Not only will we NOT get cuts in spending, the budget grows by the day more quickly than pinocchio’s nose.

Here is what the market thinks about the U.S. Government’s ability to manage its finances: 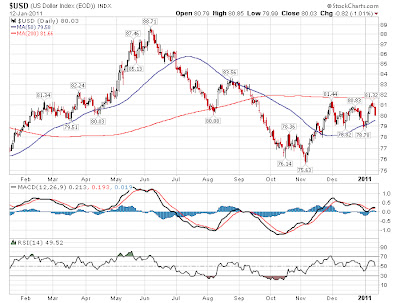 (click on chart to enlarge)
For sure, we get some technical dead cat bounces along the way, and a reader always busts my stones when we get one (but is radio silent when the dollar resumes its descent lol), but Geither – in so many words with his China rhetoric yesterday – essentially told the world that the U.S. is going to print the dollar to much lower levels.  Bernanke is putting those words into action.  It’s a serious Comedy of Errors.  Here’s a great analysis of the U.S. dollar situation I sourced from King World News blog.  I agree with this view:  LINK
And what is even more humorous to me is that everyone in this country is discussing the dire multi-sovereign fiscal crisis going on in Europe.  The fact is that California alone is in worse shape than several countries over in Europe combined.  Then layer on top of that Illionois, NY, NJ, etc.  I don’t have time to add up the numbers, but if you include the full present value of Federal entitlement liabilities, State pension unfunded-liabilities, State/municipal debt obligations and private debt in this country, we would all wonder why news about the situation in Europe is even in the news.  Besides, China has already said it will prevent a collapse in Europe.  I have not heard China make that proclamation about this country, nor will we after Geithner took his water pistol to a battle field of political rhetoric.  It was more pathetic than Poland’s calvary trying to defend against Germany’s tank and air attack.
Two of the biggest Government lies that grow and perpetuate on a monthly basis are the monthly employment and inflation reports.  For a great explanation of the golden truth about the real numbers, this interview with John Williams is a must-read:  Govt Lies
Those of us who have been investing in precious metals for at least the past decade have known all along that the Govt economic reports are bogus.  The analysis of this is now starting to seep into the mainstream media, to an extent.  Certainly not the most common sources of news like the night time local t.v. news broadcast or daily newspapers.  But it’s getting a lot more exposure and acknowledgement in blogosphere.
One more must-read.  This guy has become my favorite economic analyst and his writing style is superb:  Alisdair Macleod
One has to wonder how long it will be before the Obama people decide to curtail what is allowed to be posted on the internet….it gets more Orwellian by the day.  Protect yourself with gold and silver.
Source:Observations On The Government Spending Bubble, The Dollar and Government Lies
Previous

U.S. Dollar, Gold, & Silver Were Down on Thursday – Really?