Based on the November 22nd, 2013 Premium Update. Visit our archives for more gold & silver articles.

In our latest free essay, we focused on silver. We wrote: “the outlook for silver remains bearish and further declines should not surprise us.” On the same day, after the essay was posted, silver declined sharply moving very close to the declining support line that we had featured in that essay. On a side note, it was actually a long-term support line that stopped the decline (for now).

With so much volatility this week, we have decided to zoom out a bit and take a look at the markets from the long-term perspective. Is the final bottom in for gold, silver and mining stocks? We have prepared 3 charts for you today that should help us deal with this issue. Let’s start with the Dow-to-gold ratio (charts courtesy of http://stockcharts.com). 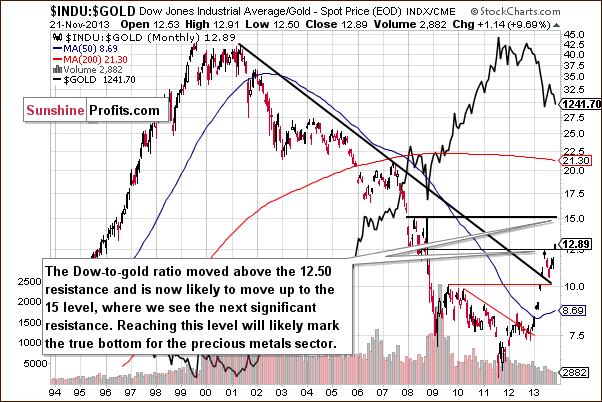 That’s one of the most important and useful ratios there are as far as long- and medium-term trends are concerned. In particular, the big price moves can be detected before they happen (note the breakout in the first months of the year that heralded declines in gold).

In Tuesday’s Market Alert, we wrote the following:

The Dow-to-gold ratio moved above the 12.5 level – to 12.56. The breakout is small and unconfirmed by the moment, but we are one step closer to the next (and probably final) plunge in the precious metals sector.

With the ratio even higher today, we have a good possibility that the breakout will be confirmed and that we will see a big drop in the price of gold in the coming weeks or months.

Having discussed the above, let’s move on to the chart featuring junior mining stocks. This is actually the only somewhat bullish chart that we feature today. This might seem encouraging, until you consider the fact that the previous small breakouts turned out to be fake moves and led to even bigger declines. 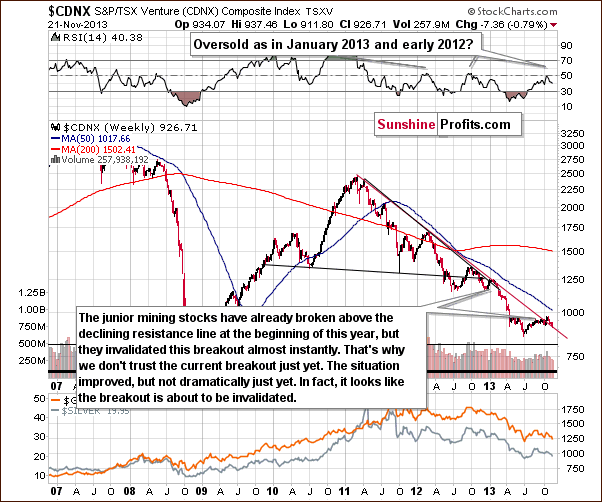 In our essay on mining stocks from Nov. 8, we wrote the following:

Although the juniors sector moved above the declining resistance line, we think that it’s still too early to say that the breakout has been truly confirmed – especially when we take into account the position of the RSI.

Please note that the last two times when the indicator reached these levels, major medium-term tops were formed. Therefore, we would need to see a verification of the breakout first to view it as an important medium-term signal. This would be the case in any other breakout as well, but in case of the above chart, waiting for a verification seems particularly justified because we have already seen a false breakout at the beginning of this year – one which was followed by a significant decline in the entire precious metals sector.

Since we wrote the above, juniors have declined (in the preceding two weeks and also this week) and they look like they are about to invalidate the previous breakout, which would – naturally – have bearish medium-term consequences for the entire precious metals sector.

If the decline that we are likely to see in the precious metals sector takes juniors back below their declining red support/resistance line, we will have one more indication that the next major move will be to the downside.

Please note that in case of the junior mining stocks the next significant support is much below the current value of the TSX Venture Index, so the coming decline will likely be very significant.

Finally, we would like to discuss the current situation with the gold-stocks-to-gold ratio. 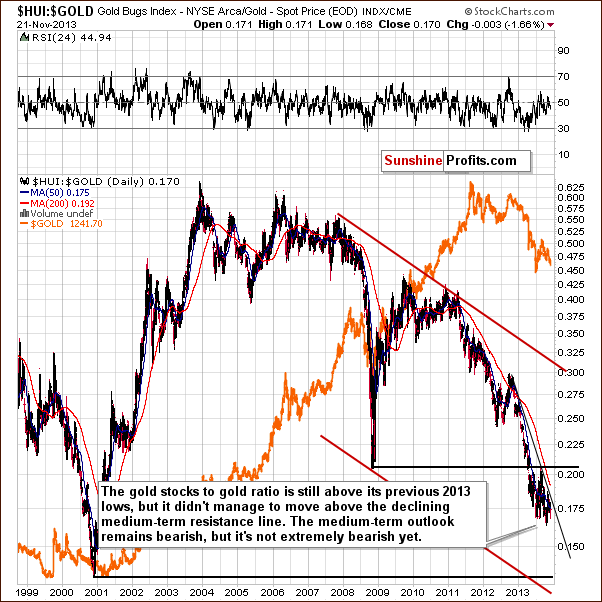 On the above chart, we see that the situation has deteriorated in recent days. Since the beginning of the week, the HUI-to-gold ratio has declined and hit a fresh monthly low on Thursday. Despite this drop, the gold-stocks-to-gold ratio is still above its previous 2013 lows.

From this perspective, the downtrend remains in place, and it will remain in place as long as the HUI-to-gold ratio stays below the declining resistance line. Since the ratio is not that close to it, it doesn’t seem that we will see a breakout soon. In fact, we don’t expect to see one before another major plunge in the precious metals sector.

Summing up, the final bottom for the decline in gold, silver and mining stocks doesn’t seem to be in just yet. Consequently, jumping in with both feet into the gold market might not be the best idea right now. Still, when and how that bottom is reached is a different matter and we encourage you to keep an eye out for technical signs that could help you not only enter the market at the right moment, but perhaps make money also while metals and miners decline.

To make sure that you are notified once the new features are implemented, and get immediate access to our free thoughts on the market, including information not available publicly, we urge you to sign up for our free gold newsletter. Sign up today and you’ll also get free, 7-day access to the Premium Sections on our website, including valuable tools and charts dedicated to serious Precious Metals Investors and Traders along with our 14 best gold investment practices. It’s free and you may unsubscribe at any time.

Sunshine Profits enables anyone to forecast market changes with a level of accuracy that was once only available to closed-door institutions. It provides free trial access to its best investment tools (including lists of best gold stocks and silver stocks), proprietary gold & silver indicators, buy & sell signals, weekly newsletter, and more. Seeing is believing.

All essays, research and information found above represent analyses and opinions of Przemyslaw Radomski, CFA and Sunshine Profits’ associates only. As such, it may prove wrong and be a subject to change without notice. Opinions and analyses were based on data available to authors of respective essays at the time of writing. Although the information provided above is based on careful research and sources that are believed to be accurate, Przemyslaw Radomski, CFA and his associates do not guarantee the accuracy or thoroughness of the data or information reported. The opinions published above are neither an offer nor a recommendation to purchase or sell any securities. Mr. Radomski is not a Registered Securities Advisor. By reading Przemyslaw Radomski’s, CFA reports you fully agree that he will not be held responsible or liable for any decisions you make regarding any information provided in these reports. Investing, trading and speculation in any financial markets may involve high risk of loss. Przemyslaw Radomski, CFA, Sunshine Profits’ employees and affiliates as well as members of their families may have a short or long position in any securities, including those mentioned in any of the reports or essays, and may make additional purchases and/or sales of those securities without notice.

On the Trail of Juniors with Blue-Sky Potential: Eric Coffin