Throughout October, I was regularly updating the blog with short term price action in various asset classes, which represented trading opportunities. One of those was the triangular pattern in Gold and Silver. Let us update the picture…

Chart 1: Precious metals broke down out of their respective triangles 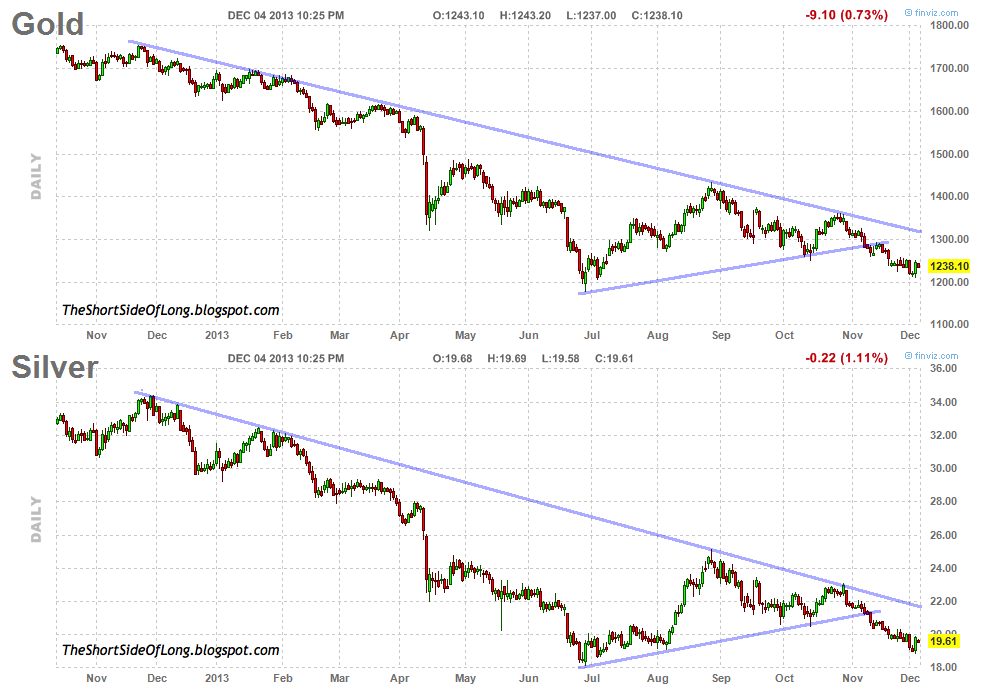 Source: Fin Viz (edited by Short Side of Long)

A big clue in the tape came around late October when the overall PMs sector, and in particular Silver, started to reverse near the high end of its downtrend line resistance. Silver actually posted a huge technical reversal, giving a sell signal which I personally took with a small trade, after which the whole sector broke down and re-tested its recent lows from June. A close friend of mine actually did amazingly well on this trade (you know who you are).

In the last 24 hours, we have seen sharp reversals in price on the back of super negative sentiment (Silver sentiment is at 2nd lowest level since 2001) and technical oversold conditions that happens to be right on or near supports. Many analysts are now claiming Gold and Silver are forming a double bottom. This view is similar to the double bottom claims, between April and May 2013, which never really held as prices broke down into June lows.

So has the overall sector finally bottomed out?

I wish I had a crystal ball and knew the right answer, however my opinion continues to be one of caution in the short term and extreme optimism in the long term. Let me explain. In the short term, I continue to think that the final low will arrive with a bear trap, which is also known as a false break down (one final scary sell off). Therefore, I expect at some point (maybe not straight away) for Gold to break down another 100 or more dollars lower (obviously Silver will follow).

To the contrary, in the long term, I expect both metals to make new highs (Gold above $1921 and Silver above $49) in coming years. With that in mind, I continue to accumulate these assets on weakness as other investors panic sell during the ongoing bear market. The motto is buy low and sell high.

Silver Doré Production Commences at the Del Toro Silver Mine