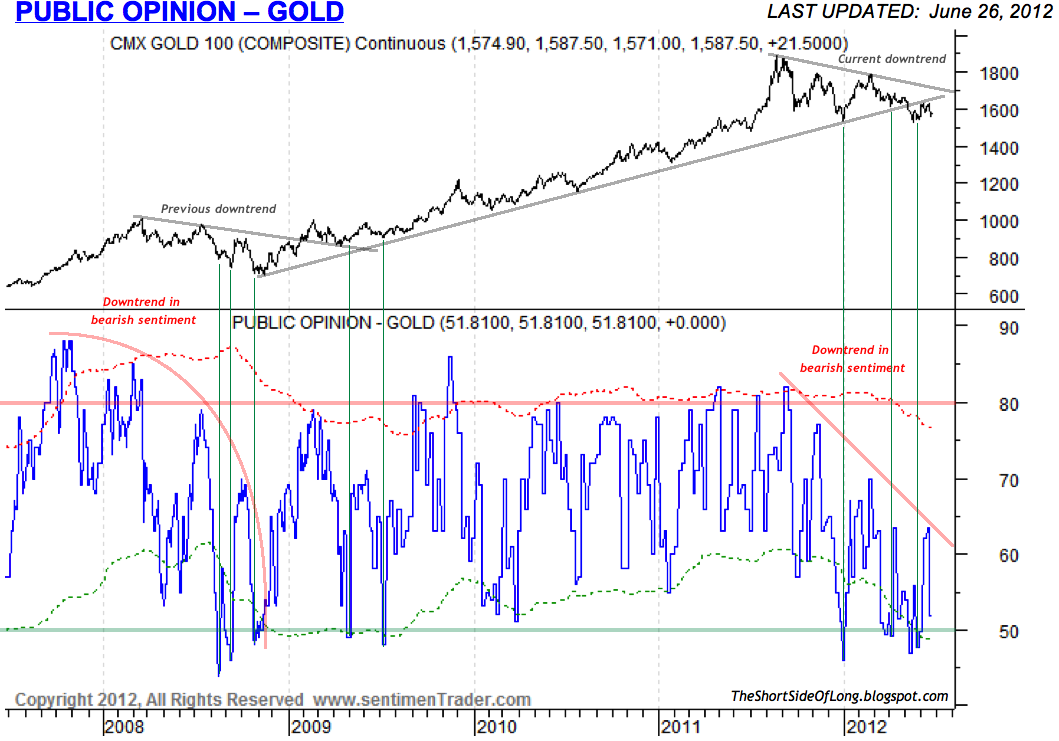 Public Opinion on Gold, which is a select group of sentiment surveys, fell quite hard once again this week. Having said that, a strong contrarian buy signal from bearish extreme levels usually occurs as readings drop below 50% bulls and we aren’t quite there just yet. Another major point I would like to put forward is that Gold’s bearish sentiment has been trending downwards since August 2011, similar to the way it was trending downwards in 2008. Eventually, we will have no bears left and from those negative extremes a new cyclical bull market will be born. 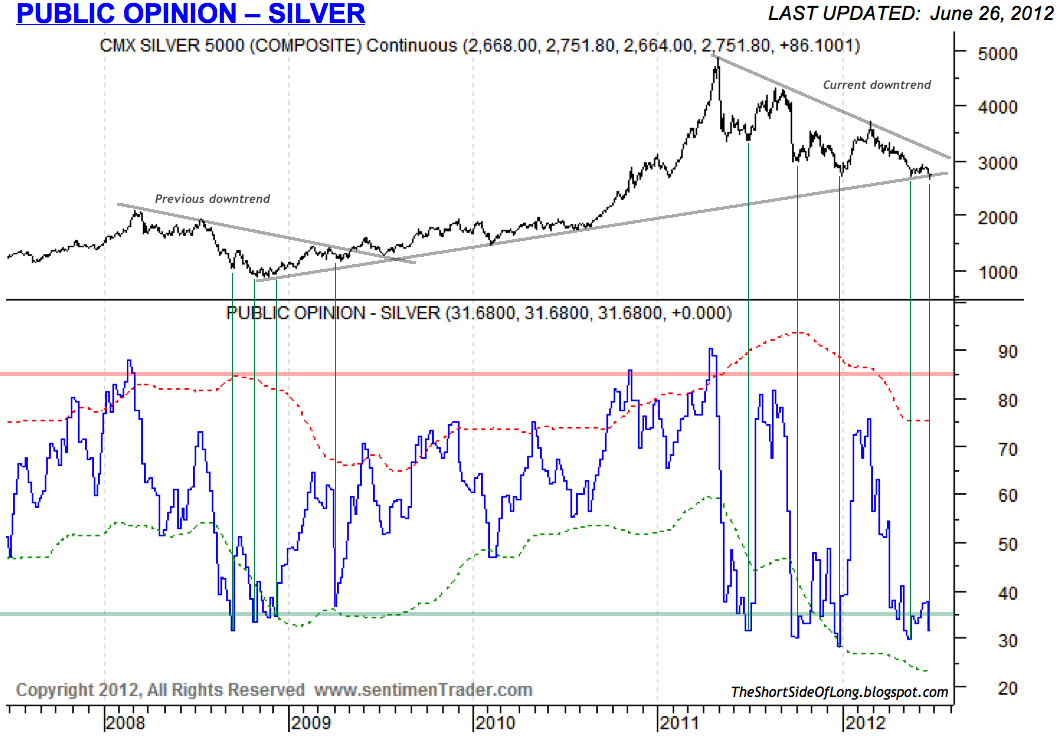 Public Opinion on Silver, which is a select group of sentiment surveys, fell once again this week similar to Gold. However, unlike Gold, Silver’s sentiment is now once again sending a strong contrarian buy signal from bearish extreme levels, which usually occurs as readings drop below 35% bulls. Another major point I would like to put forward is that Silver’s bearish sentiment has not recovered towards a neutral / median position (60% bulls) since February of this year. Prolonged bearish sentiment can create super strong short squeezes and amazingly powerful rallies, last of which we saw in January and February 2012 for Silver after a similar downbeat mood.

As a side note, the global economy is weakening and the European situation is worsening. It is possible to have a crash occur from very negative sentiment and oversold technical conditions. Therefore, if Gold and Silver do not hold $1530 and $26 support levels properly, a break below these levels could crash the price and create a wash out capitulation bottom. 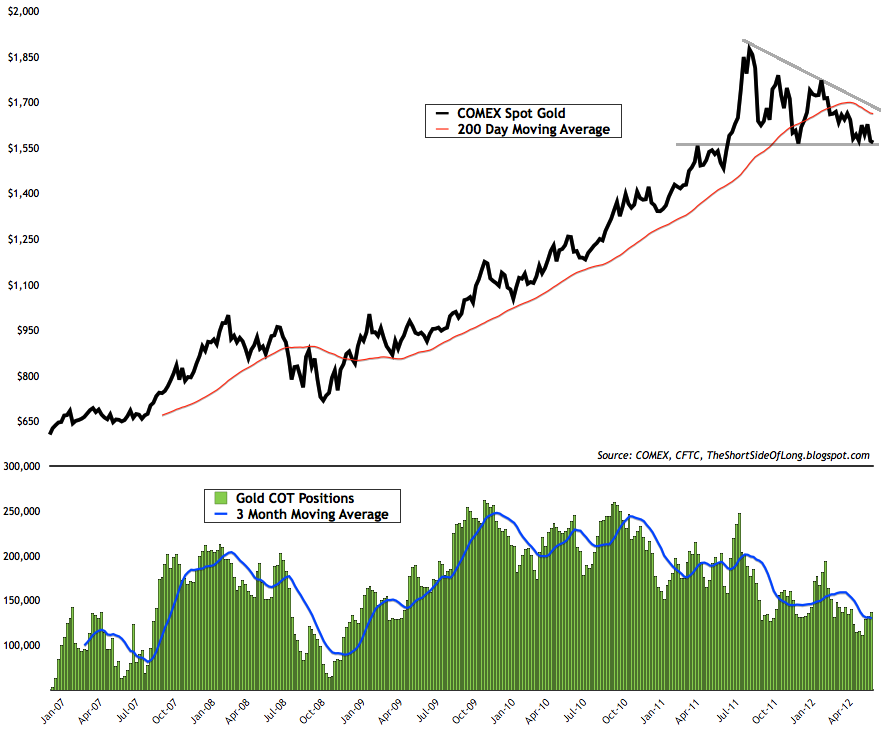 Futures positioning in Gold, tracked by the COT report, has been increased over the last three weeks. Having said that, positioning is currently as low as March 2009 but not as low as it was during June/July 2007 nor October 2008. 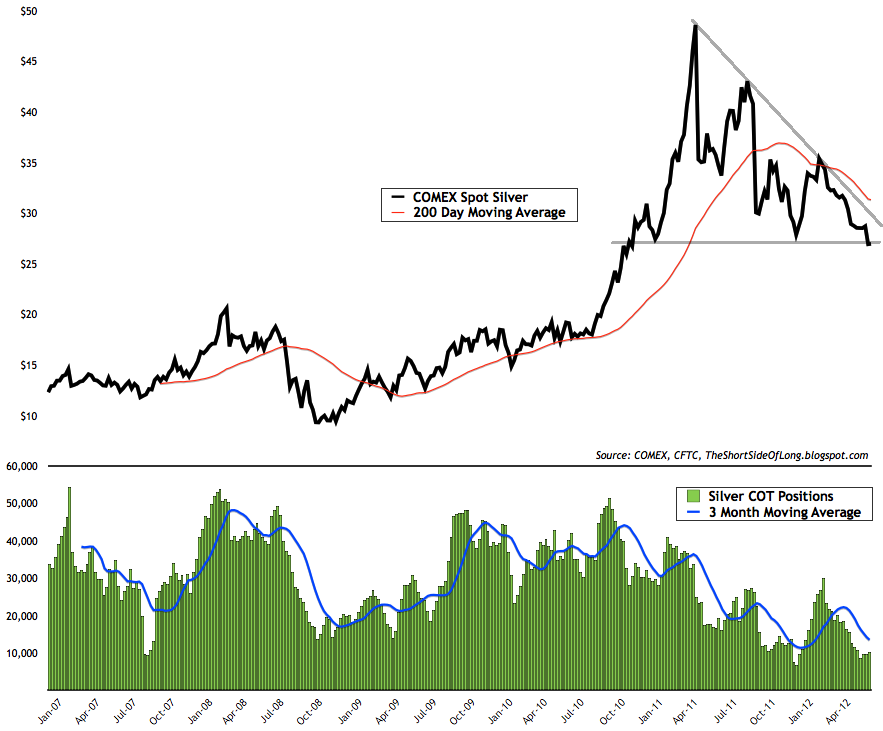 Futures positioning in Silver, tracked by COT report, has been quite flat over last the three weeks. Furthermore, positioning is currently lower than October 2008, March 2009 and June / July 2007. There just aren’t any bulls left on Silver. Technically, based on weekly closes, both Gold and Silver are currently sitting on a very important support level – $1,530 and $26 respectively. A break below these levels, could see further cuts in net long positioning and quite possibly in dramatic fashion. 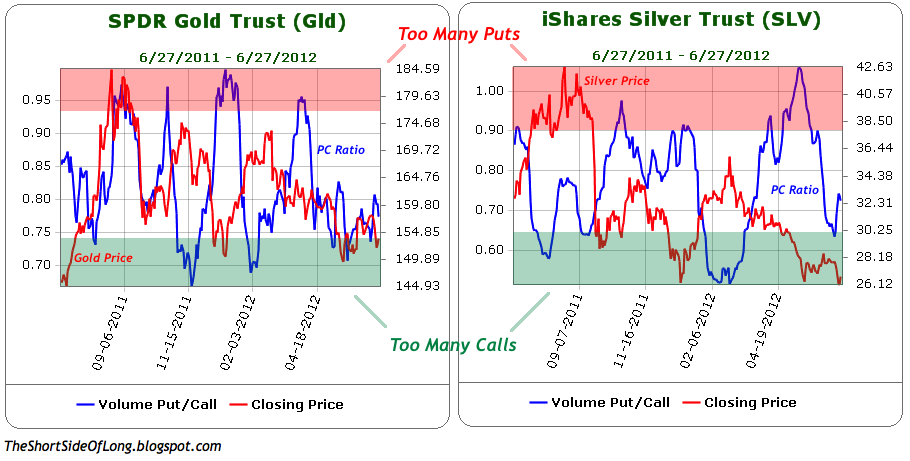 Option positioning in the Precious Metals sector is not confirming Public Opinion sentiment surveys featured above. Currently, we seem to have a lot more Calls than Puts on both Gold and Silver. From a contrarian point of view (at least in the short term), we could therefore experience further selling in these two assets. As a side note, Put Call options ratio is not the best predicator of future price actions and should be weighted lower in priority than the Public Opinion or COT reports. 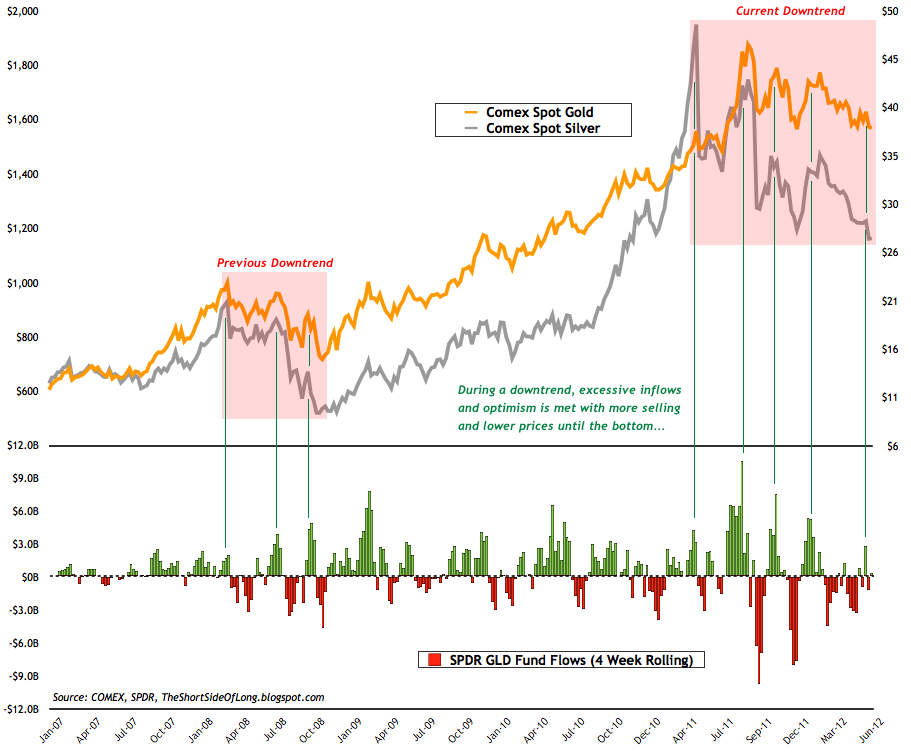 Price wise, Gold and Silver remain in a downtrend, which is a series of lower lows and lower highs on a closing basis. This can be seen in the chart above. During a downtrend, excessive inflows into GLD ETF seem to be a strong contrarian signal of optimism which tends to be met with more selling. While we are witnessing slight outflows this week, we do not have panic similar to that of late September or late December 2011 just yet. 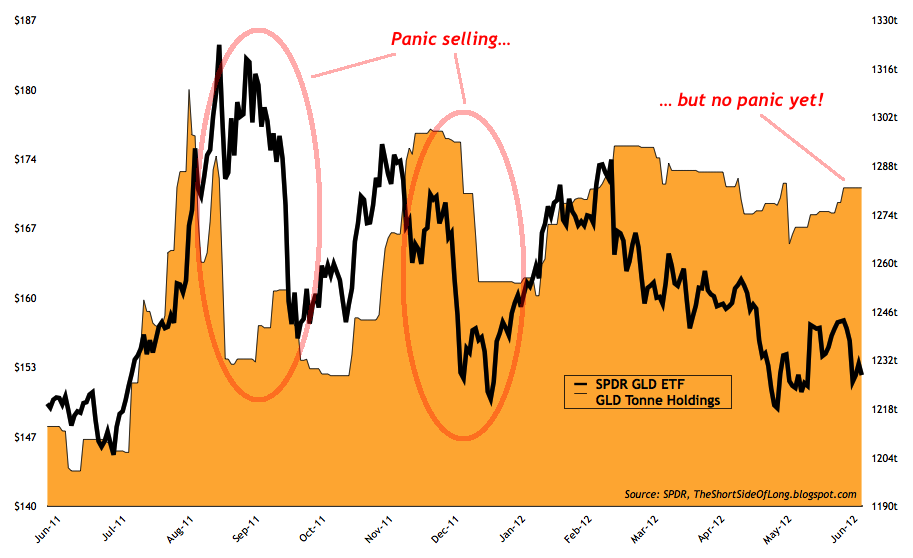 Furthermore, it is also interesting to see that despite constant lower prices, PMs bulls remain hopeful of higher prices and refuse to sell their GLD physical holdings in similar fashion to previous corrections. One reason behind this is Bernanke’s promise that he will do more QE down the road. Another reasoning behind this is most likely due to a slow bleeding sell off unlike in September 2011 and December 2011, when a mini-crash in prices most likely triggered large amount of stop losses for hedge funds. They say downtrends slide on a slope of hope so beware!

Short Interest ETF positioning in the Precious Metals sector is not at very extreme levels to indicate a contrarian buy signal just yet. Having said that, the data is lagged and only valid until 01st of June 2012, so there is a possibility that more short interest was engaged since than. During a late December 2011 bottom in Gold @ $1,530 short position reached 22 million shares, while Silver @ $26 short position reached 26.5 million shares. Today, we have 18.7 million shares sold short on GLD and only 14 million sold short on SLV. Defiantly not as bearish and therefore not as strong of a contrarian signal as last time we traded around these levels. Gold mining shares have been absolutely decimated in recent quarters. We are currently extremely oversold according to the Summation Index, % of Stocks Above 200 MA and % of Stocks @ 52 Week Lows. All three major long term breadth components are indicating that the bear market is either already over or is very close to being so, after a final capitulation occurs. One major technical development that has not yet occurred is a brake out on the upside from a downtrend in Cumulative AD Line, as well as the actual price itself. Until we get those confirmations, the downtrend might persist and retest recent GDX lows. 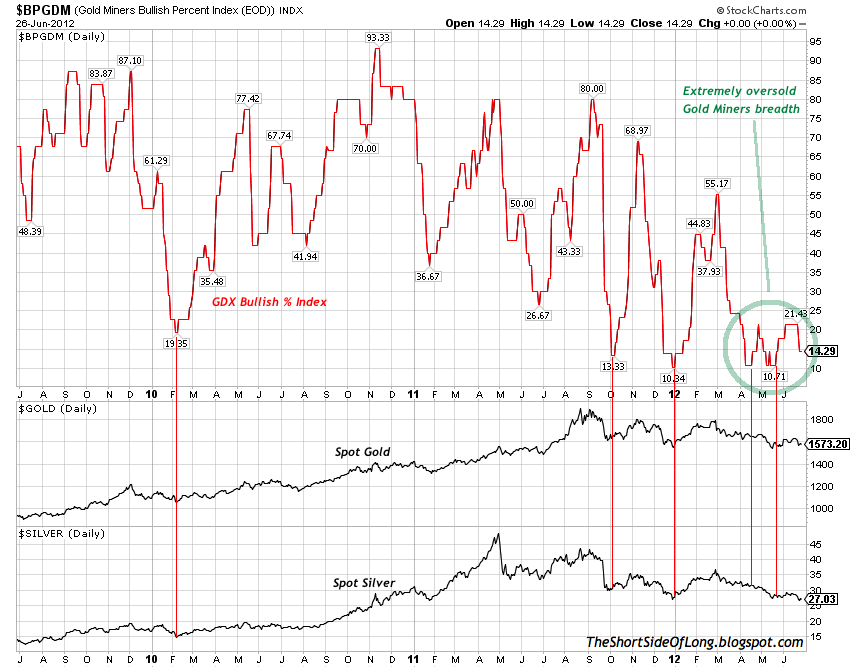 Furthermore, Bullish Percent Index – another measure of Gold miners breadth – has been signalling that the overall Precious Metals sector its extremely oversold for a prolonged period of time. As already stated above, these type of signals usually point to a major bottom forming, but if the current supports break down, one final selling wash out could also occur. Regardless of the outcome, both events should be bought as we are most likely close to the end of a cyclical bear market.

Since Gold, Silver, Platinum and PMs mining companies have high degrees of correlation, it is good enough to just follow Gold’s seasonality. Most PMs bulls already know this, but majority of the time over the last 5, 15 or 30 years Gold has a tendency to bottom around the middle of the year and start advancing into August and September. Majority of the gains occur in the month of September, which was a completely opposite outcome to what happened in 2011. Let us hope this time around we move back to proper seasonal patterns, giving us traders the edge to front-run the price (doesn’t always work). Finally, let us move onto some long term charts:

We are currently still in a cyclical bear market correction during a longer term PMs secular bull market. Comparing the current price action to that of the 1970s price action, we can see that Gold and Silver are definitely not in a bubble or overvalued in a huge speculative mania. Gold would have to reach levels higher than $7000 and Silver higher than $150 to match the 1970s secular bull market gains.

On top of that, Gold’s rise is also definitely undervalued relative to stock bubbles in the last two decades too. While a lot of investors claim that Gold has outperformed stocks bonds and real estate over the last 10 years, in my opinion they are mistaken to think that Gold is overvalued. This is perfectly seen in the chart above. Something interesting occurs when we forward the overall picture back to the days of the last Gold bubble, late 1970s and into early 1980s – all of a sudden, relative to stocks and bonds, Gold is extremely cheap could easily spike enormously from these levels.

I truly believe that Gold and Silver are very smart investments for years to come and I expect a major mania to occur sometime within the next several years. The only time one should plan on selling their Gold and Silver holdings is at the final vertical spike. All other sell offs, consolidations, cyclical bear markets and corrections (minor or major) should be used to accumulate more of the Precious Metals. That is what I plan to do and will continue from a month to month basis as my fund receives new inflows.

Credit Markets
Nothing new to report. Refer to the side menu for previous articles.
Trading Dairy Update
Previous