In the early days of this bull market many prominent analysts and leaders from the bullish camp noted that the juniors would be the way to best leverage the bull market. The thinking was that juniors were a call option on Gold and senior producers because of their lack of exploration in the previous decade would need to acquire the juniors to replaces reserves and grow production. From 2002 to 2007 the juniors performed quite well. Yet, five years and two cyclical bear markets later, the juniors have lost their luster while Gold has nearly tripled in the same period. In this missive we look at some charts to decipher time to buy juniors and when they should be avoided.

In the first chart we plot the HUI and the CDNX (Canadian Venture Exchange) against the HUI. The CDNX is a proxy for juniors. It is comprised mostly of Gold-related companies but also some energy and technology companies. We mark the start and the end of each cyclical bull market in the HUI. We highlight junior outperformance in yellow. 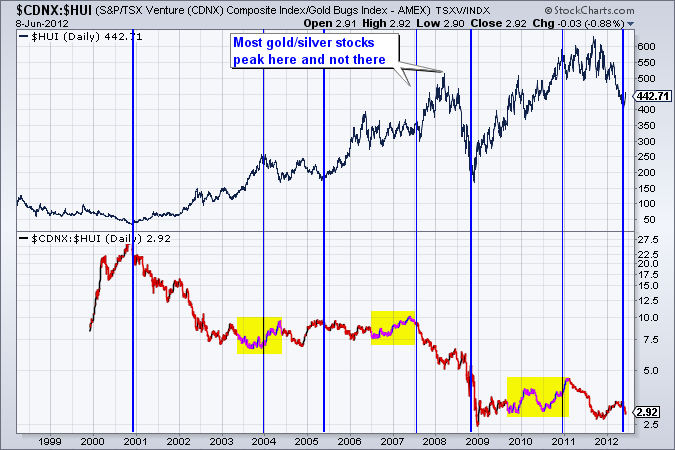 Juniors did not begin to outperform until quite late in the initial cyclical bull as the secular bull market was just starting and it would require more time than usual for investors to increase risk in a sector coming out of a depression. Therefore, outperformance began in the middle of 2003 and actually lasted into the first cyclical bear. In the previous two cyclical bulls, juniors did not strongly outperform until about a year after the bottom in the HUI.

In the second chart we plot Gold above the CDNX/HUI ratio. It’s important to note that the periods of extended junior outperformance coincided with major breakouts in the price of Gold. The CDNX began to outperform in the summer of 2003. A few months later Gold launched a breakout and ultimately reached levels not seen since 1990. The next major breakout came in late 2005 which could be characterized as a multi-decade breakout. The juniors relative to the HUI bottomed about three months after the breakout but did not begin to strongly outperform until after the first big correction post-breakout. Finally, most recently, the CDNX began to outperform when Gold eclipsed $1000. The juniors would strongly outperform once Gold reached $1200. 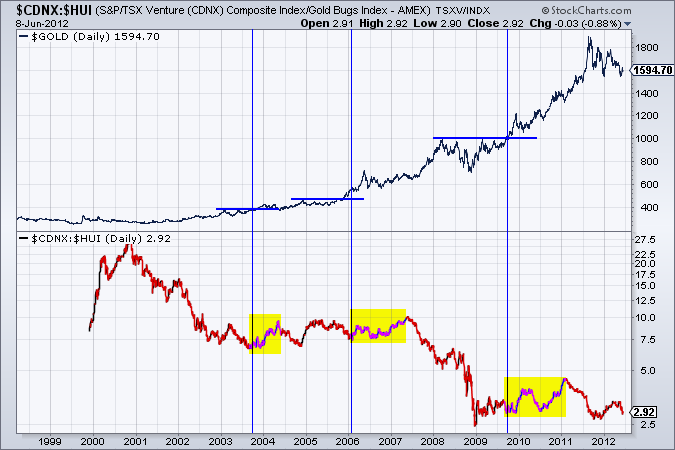 The results of this quick study although not exactly surprising should be instructive for speculators and investors in the gold stocks. Juniors will exhibit strong relative performance about nine to 12 months into a new cyclical bull market. A major breakout in Gold will offer strong confirmation of a new period of junior outperformance. Apply this to the present and it would indicate that juniors won’t begin to outperform until Gold breaks $1900. Remember, we are speaking about strong outperformance and not specific bottoms. If Gold and gold stocks bottomed in May then history tells us juniors won’t regain outperformance until 2013.

While juniors, mid-tiers and large producers will usually bottom around the same time, they each outperform at different times. The initial advance in the Gold price benefits producers first and foremost because the bottom line is impacted immediately. Since junior explorers and other non-producers do not generate cash flow and earnings they are essentially speculative companies. This group outperforms when speculation increases. Is it a surprise that speculation increases after Gold makes a major breakout? Take a look at the 12-year charts of the CDNX and HUI. One is in a bull market and has at times provided leverage to Gold while one shows no trend except extreme volatility. If you want leverage to the bull market consider growth-oriented producers. If you want to speculate then wait until the appropriate time (as we’ve demonstrated here) and of course, price. In the meantime, we continue to focus on the producers and juniors best positioned for and most likely to take advantage of the inevitable next leg up in this bull market. If you’d be interested in professional guidance in this endeavor, then we invite you to learn more about our service.