! To make the point of how absurd it is to panic after a minor correction, I post the thoughts of gold permabears in real-time so that we can all have some good comic relief looking back. These people have no clue what they are talking about, and they will continue to be skeptical until the very end of this bull market.

In contrast to the permabears, how many people were giving you the “markets are giving you a gift” speech and recommending accumulating gold and gold shares between $1160 and $1200? Gold and silver shares experienced probably the second worst sell-off I’ve seen in 2-3 years. The sharp, unnatural downward collapse in shares suggested to me that weak hands were panicking and capitulating. I do the opposite of most people and buy into panics. One month later and you know why.

As an investor in gold, it is critically important to have a long-term outlook. Investors with a short-term outlook get bulled up at just the wrong time and unload their positions right before a major move. They can’t take the supposed volatility in gold. 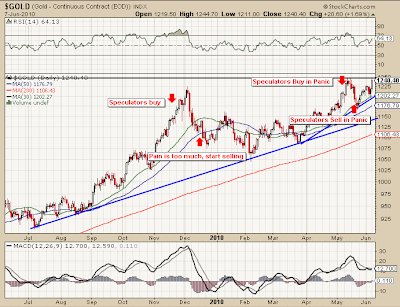 But the movements in gold only seem volatile if you are focused on day to day movements. The longer terms charts show a steadily rising trend. I choose to ride the trend as long as the fundamentals that justified the trend are intact. In the context of a bull market, corrections are a gift as weak hands transfer ownership to strong hands. This relationship only reverses at the tail end of a bull market. 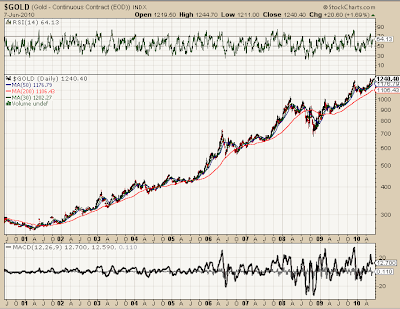 We temporarily broke through the all-time highs of $1250 this morning. Once $1250 acts as support, we’re off to the races and $1400-$1500 is in play. Profitably trading the next intermediate term move will be difficult since there will be so much noise coming from all angles. In preparation, I urge my readers to learn from the many lessons this bull market is presenting. Take note of the skepticism and biases of the mainstream financial media. Take note that of the weak arguments used to justify the demise of gold. Remember how quickly sentiment can reverse in corrections (force yourself to buy when you’re scared). Focus on value, not price.
Profiting from bull markets is nearly impossible if you let your emotions take control. This is why I recommend buying corrections and then turning off your computer. Play this bull market keeping the longer term picture in mind. The short run shouldn’t concern you at all; let the CNBC analysts focus on the day to day noise.
Previous

The Scramble for Gold is On…