The precious metals complex had a great rebound at the end of the summer but is now in the midst of a correction. Recently we wrote that the correction was nearing an end. We believe that to be the case. A short-term bottom could occur sometime this week. However, the precious metals sector was unable to retain much of the very strong momentum it previously had. Thus, the metals and stocks will need some time to confirm support and generate positive momentum before they have a chance of breaking to new highs. That being said, we wanted to take a broader view and analyze the sector in its current context in comparsion to the past.

Gold is likely to end up in its longest consolidation, which would surpass the 2006-2007 and 2008-2009 consolidations. Note the chart below and our observations on the three consolidations. Gold’s current position is weaker than the previous two consolidations but that won’t be of concern as long as the metal holds above the 400-day moving average at $1650. Whether Gold holds at $1650 or bottoms at $1600, the metal is likely to remain in this consolidation for a while. 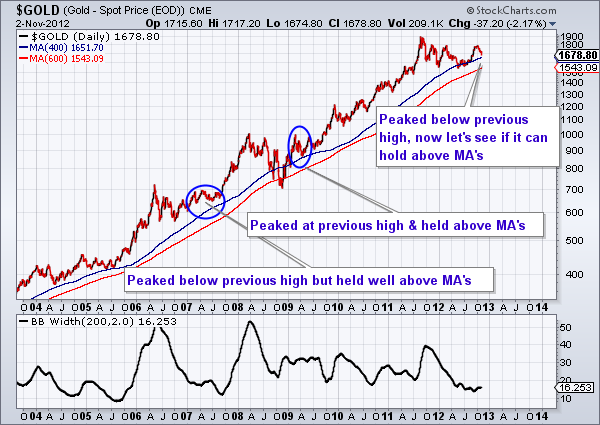 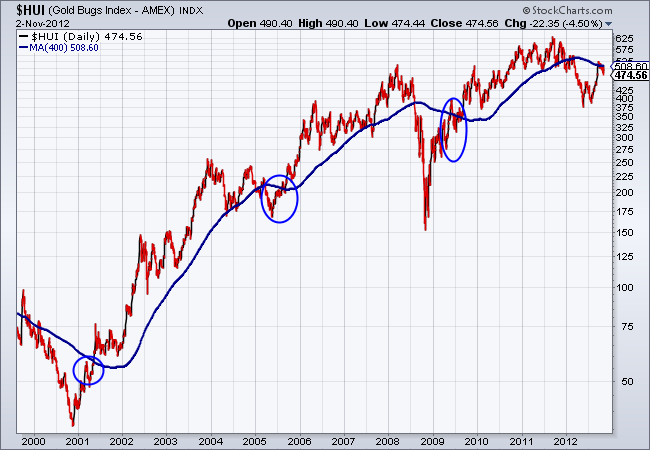 We focus on 2005 and 2008 because those are most applicable to today’s situation. In 2005, the HUI traded around the moving average for almost three months before pushing up to the previous all-time high. A similar thing happened in 2009. The HUI wrestled with the 400-day moving average from May until September before eventually rallying back to all-time high.

To conclude, there is nothing to be worried about in regards to precious metals. First, we should note that the shares have been showing more strength than the metals, which is always a very good sign for the near future. Second, the metals and more specifically the shares have been acting exactly as they did within a similar context in the past. After a rebound from a major low, the shares typically correct and wrestle with the 400-day moving average before embarking on a move to previous highs. Traders and investors are urged to be patient and accumulate at support when sentiment is constructive. Now while the market is wrestling with the 400-day moving average is the time to do your research and find the companies that will lead the next leg higher and outperform the market indices like the HUI, GDX and GDXJ. If you’d be interested in professional guidance in uncovering the producers and explorers poised for big gains then we invite you to learn more about our service.