This essay is based on the Premium Update posted on July 1st, 2010

At times daily volatility can cause one to lose the big picture from sight – focusing on trees is ok as far as one doesn’t forget about the whole forest. This universal approach can be applied today since we have just seen a massive decline in the prices of gold, silver, and mining stocks. In this case, we would like to provide you with our thoughts on something that might influence the precious metals sector (not every part thereof to the same extent) – the head-and-shoulders formation on the general stock market (charts courtesy of http://stockcharts.com.) 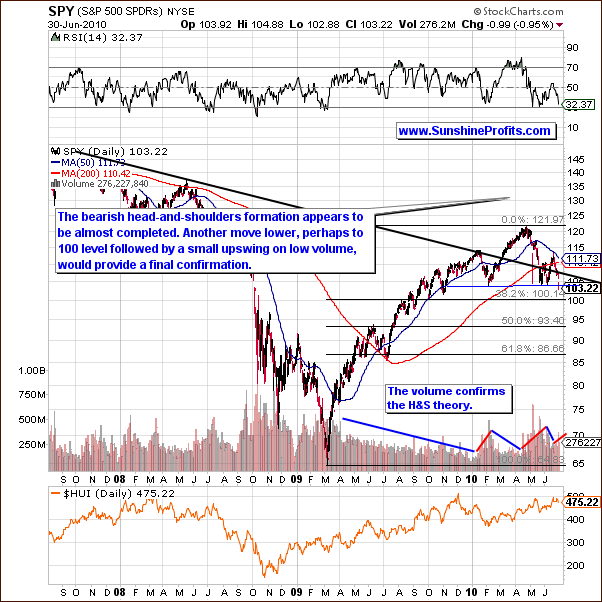 This week’s SPY chart clearly shows a continuation of the bearish trends, which were prevalent to last week. There has been continued development of the head-and-shoulders pattern and this has been confirmed by an increase in volume. The long-term chart above suggests that the pattern has yet to complete.

Note the low point is below two previous bottoms. Also, note the pattern in the chart of weekly volume levels. This bearish head-and-shoulders formation has and will probably continue to spell trouble for the general stock market. More details will be seen on the short-term charts.

The final confirmation of pattern completion will likely come from price movement in the SPY ETF or directly from the main stock indices such as the Dow Jones Industrial Average. Visible declining below the neck level (SPY: $103) and then increasing only slightly, accompanied by low volume increase would be a final confirmation of the bearish trend. Subscribers who seek to short the general stock market may wish to watch these signals closely as there may well be some good profit opportunities in this speculative activity. 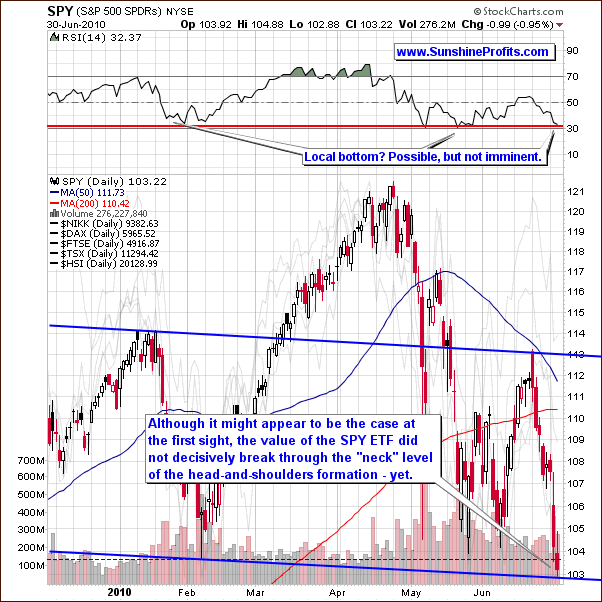 This week’s short-term chart reveals that the June top is slightly below the one seen during in January. Since the right shoulder in the pattern is lower than the left, the neck is likely skewed as well.

The price would need to move below the solid blue line in the chart for completion of the formation. Without this type of movement, the breakdown is not complete although it may appear to be.

The RSI is presently in the 30 range, which corresponded to local bottoms in early May and February. However the late January RSI in this range did not result in a local bottom until a week later. In late May the 30 level in RSI did not mark the final bottom either.

Consequently, the RSI alone does not imply that the bottom is imminent. If price were to move sideways and then lower or simply move lower immediately the implications would likely result in the SPY ETF below a level of $103 and then moving up on low volume would be a bearish signal.

The DIA ETF, a proxy for the Dow Jones Industrial Average confirms the above comments about the non-existence of the breakdown at this point. The left and right shoulders are relatively equal – no breakdown has yet been seen here. 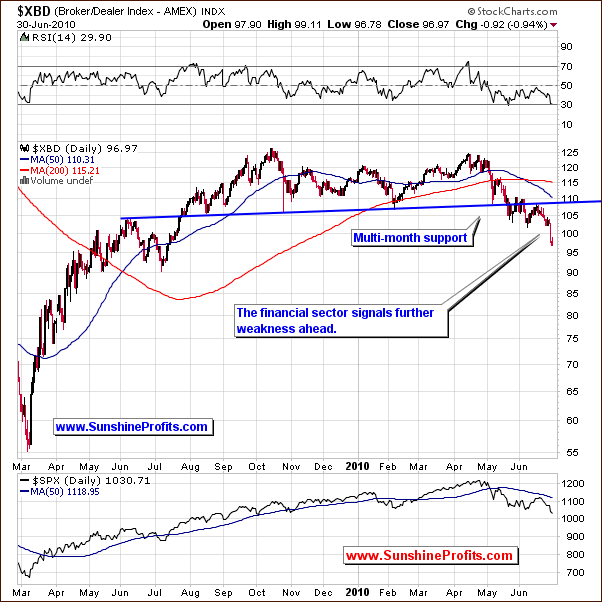 The Broker-Dealer Index this week indicates the likelihood of a breakdown. The financials have been very weak for several months and especially in recent days. This is normally a clear indication that declines will follow in the main stock indices.

Consequently, the odds favor a breakdown from the recent head and shoulders pattern in a continued move downward. Although this is not a certainty, it is probable. If the general stock market moves below the neck in this pattern and then rises slightly on low volume, shorting SPY ETF could be profitable. Part of the precious metals sector, namely silver and mining stocks are at particular risk when the general stock market is trending in ways seen today.

We have frequently commented on comparisons between gold and silver investments. While writing about gold being preferred over silver we have meant much more than just the profit potential of both markets. It simply indicated that silver and mining stocks are more vulnerable to general stock market’s weakness and therefore carry a higher probability of not moving higher. This can also be stated as a higher risk to reward ratio.

Caution: the following is an example to be used only for illustrative purposes. The quantities, percentages and dollar amounts quoted are not in any way implied to be meaningful except in explaining the risk to reward ratio.

Let us say, for example, that gold has a 90% likelihood of increasing in price, silver has a 70% chance and mining stocks have a 60% chance and all of these markets would move up or down by the same amount during the move. All would be likely to move higher since, in this example, all percentages are greater than 50. Since gold is the most probable to go higher, it would be less risky. Therefore, gold would be preferable over silver and mining stocks even if all of them are likely to rise.

To address the subject of risk to reward ratio, let us go a step further with our previous illustration. Suppose that we invested $1,000 in each of the situations above. Let us further hypothesize that the upside potential or likely profits were $400 for each if our investments all reached their full potential.

Let’s run a simple simulation for the above example. Speculation is not a one-time bet – it’s a set of many bets, and what matters is if you lose or gain money in the long run. So, let’s see what would happen if there were many similar situations to the one described above.

With 10% of losing and 20 trades the average value of losing trades would equal 2, so we would have on average 18 winning trades and 2 losing ones.

Shocking isn’t it? One could achieve over 5 times bigger profits just by paying attention to the “what if we’re wrong” question. Moreover, if the gains and losses were spread evenly, the first loss would occur after 9 winning trades. Please recall that the profit potential alone was bigger for silver, meaning that if we had only winning trades one would have biggest gains by investing in this particular market. The point here is that up to this tenth trade gold investor would have smaller gains than his silver colleague, and the latter might argue that paying attention to losses makes no sense if markets are moving only up, and that the gold investor is wrong for preferring the yellow metal over the white one. The silver investor would have no idea that after his next trade he will wish that he had joined his golden colleague in the first place.

Please note that the above situation is just an example, in the future it could be the case that the risk/reward for silver is more profitable that the one present on the gold market.

Consequently, we strongly believe that the risk/reward ratio with focus on the long-term growth of one’s portfolio is the most profitable way to approach any market, and that paying attention many factors instead of looking at the day-to-day gains will eventually prove very useful. Please keep the above examples in mind while examining the correlations matrix below. 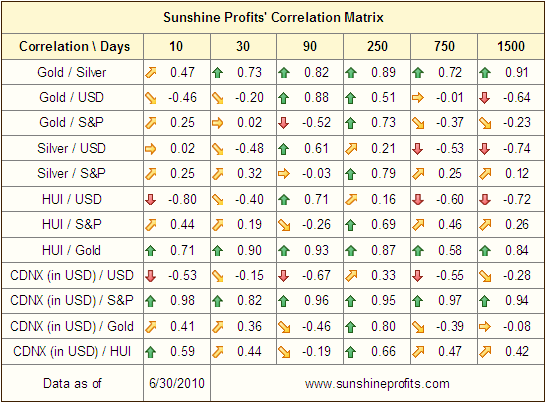 The correlation matrix has some changes this week. The positive relationship for silver and mining stocks with the general stock market has declined somewhat. The corresponding coefficient for gold with the general stock market still remains lower than the other metals. What this means is that gold will generally be more resilient during a downswing in the main stock indices; it will most likely hold its value more so than silver and precious metals’ stocks.

Summing up, gold itself continues to be the preferred part of the precious metals sector at this point due to the tense situation on the general stock market. Meanwhile, we have just sent out a Market Alert to our Subscribers describing short- and long-term implications of yesterday’s downswing for Precious Metals Investors and Traders.

Gold Mining Stocks on Verge of Breaking Out!

Bob Moriarty: Due for End-of-Empire Do-Over?